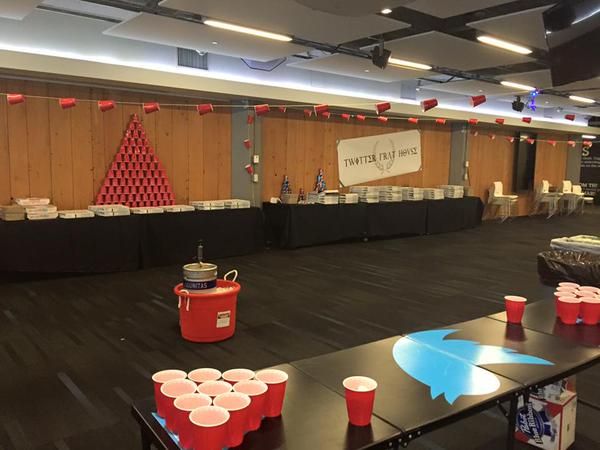 Twitter Inc said on Wednesday a fraternity house-themed party thrown by its employees, which was criticized as representing a male-dominated culture in Silicon Valley, was "in poor taste."

A Twitter spokeswoman declined to provide details on the event, but a purported photo of the bash uploaded to social media showed a party replete with red plastic cups, a keg, and a beer pong table adorned with the Twitter logo.

"This social event organized by one team was in poor taste at best, and not reflective of the culture we are building here at Twitter," the spokeswoman said in a statement. "We've had discussions internally with the organizing team, and they recognize that this theme was ill-chosen."

News outlet Fusion was the first to report on the shindig early on Wednesday, saying the company's revenue team threw the party on Tuesday in San Francisco.

Fusion reported that a photo of the event, uploaded onto Twitter by a female employee, was quickly deleted.

The image was tweeted again, however, by the group Global Tech Women, along with the hashtags #diversitymatters and #brogrammers.

In March, former software engineer Tina Huang sued the company saying it has no formal procedures for posting job openings or granting promotions, relying instead on a secretive "shoulder tap" process that elevates few women to top engineering positions.

Twitter said Huang resigned voluntarily and that company leadership had tried to persuade her to stay, adding that she was treated fairly.