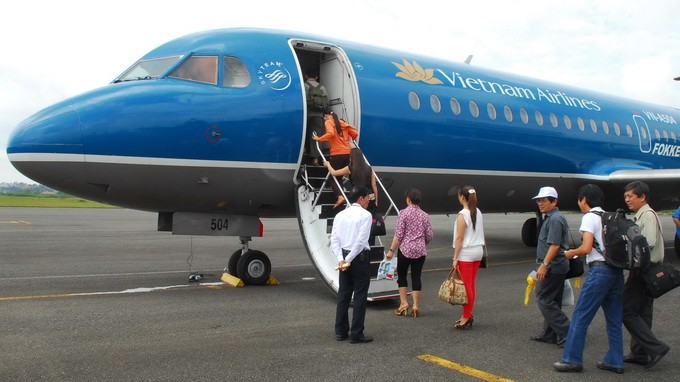 Vietnamese carriers are constantly upgrading capacity, facilities and air fleets to establish a better position among other Southeast Asian carriers following the regional integration that will be finalized this month.

The establishment of the ASEAN Economic Community, which is slated for December 31, will lead to the materialization of the ASEAN Open Skies scheme, a new aviation market for the whole region with no barrier to regional carriers.

The ASEAN Open Skies scheme is the result of the ASEAN Multilateral Agreement on the Full Liberalization of Passenger Air Services signed by the ASEAN member countries on November 12, 2010.

The scheme is recognized as an important part of economic integration of the ASEAN countries, as regional transport linkage, especially in aviation, will facilitate trade, promote tourism and help the regional aviation industry become more competitive.

In preparation for the scheme, Vietnamese carriers have worked on several projects to establish their own positions.

Vietnam Airlines has prepared for this event by upgrading its overall quality of services on the ground and in the air, in accordance with international standards from three to four stars.

In parallel with the service quality improvement is the investment in a modern fleet, as Vietnam Airlines will replace its entire wide-body fleet with 33 planes, including 19 Boeing 787 Dreamliners and 14 Airbus A350-900XWBs (both purchase and lease), over the next three years, from mid-2015 to early 2019.

Vietnam Airlines general director Pham Ngoc Minh told government news site chinhphu.vn that the national carrier is ready to welcome the ASEAN Open Skies program, but Vietnamese carriers need a clear roadmap in approaching the scheme because each ASEAN country has different levels of development, and so do other regional carriers.

A spokesperson for low-cost carrier Vietjet Air told chinhphu.vn that the open sky ASEAN region is an opportunity to grow, and Vietjet has taken steps to prepare regarding personnel, air fleet management and financial capacity.

On upgrading the fleet, besides the contract with Airbus to lease and purchase 100 aircraft, Vietjet has ordered six new A321 aircraft, bringing the total number of aircraft to over 107, he said.

The carrier has also implemented a series of cooperation activities with the world's leading manufacturers and suppliers of materials and services, he said.

Lai Xuan Thanh, director of the Civil Aviation Authority of Vietnam (CAAV) under the Ministry of Transport, told chinhphu.vn that the scheme will allow regional carriers, which are partners of the Vietnamese ones, to freely decide their transportation plans within the region, and will not face any restrictions from Vietnamese carriers, and vice versa.

For example, after Vietnam signed an Open Sky pact with the U.S. in 2008, American carriers had the right to fly as many flights to Vietnam as they wanted to, Thanh said.

Currently, Vietnamese carriers limit regional routes to a specific number of flights per week, but from the beginning of next year, this will no longer apply, Thanh added.

Moreover, the aviation market following the ASEAN Open Skies scheme will allow regional carriers, including Vietnam Airlines, to freely launch flights between any locations in the region, including between Singapore and the Philippines, he said.

Regional airlines access to the scheme is a milestone for the regional aviation industry, so this is an opportunity for Vietnam Airlines to expand its flight network to other countries in the region.

Meanwhile, connections between destinations throughout Southeast Asia will become more common thanks to the commitment of the governments to the open skies scheme.