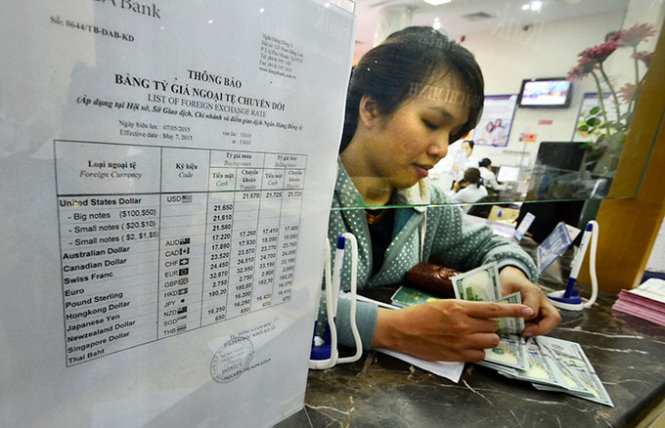 The State Bank of Vietnam (SBV) on Monday set the daily central rate for the dong/dollar at VND21,896, the very first day it adopted a new management mechanism in the hope of giving more flexibility to the foreign exchange rate.

The new policy, unveiled by the central bank late last year and officially taking effect on Monday, replaced a fixed VND-USD rate, which the SBV adjusted only occasionally in the past.

With the VND-USD trading band kept at three percent, banks in Vietnam are allowed to trade the greenback within a range of VND21,239 to VND22,553 until a new rate is set tomorrow.

SBV Governor Nguyen Van Binh said late December that the fixed rate would be replaced by the central rate to manage the forex market more flexibly, at a time when people are still hoarding the foreign currency, going against the central bank’s de-dollarization plan.

The new policy is in accordance with the demand and supply of foreign currencies in Vietnam and changes in the global market, while still helping maintain the SBV’s management role, according to a statement posted on the central bank’s website on Sunday.

The central rate is among many measures the SBV is taking to better manage the forex market this year.

The central bank is also expected to slash interest on deposits in U.S. dollars to even below the current rate of zero percent to continue its de-dollarization drive.

In 2015, the dong was devalued three times, each by one percent, in January, May and August. The SBV also announced two trading band adjustments in August, which collectively widened the trading band for VND-USD transactions from one percent to three percent.

All of this technically caused the Vietnamese dong to lose five percent of its value against the greenback.