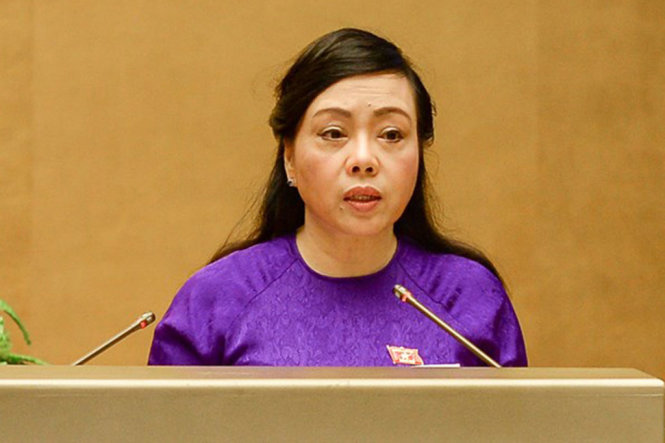 Vietnamese Minister of Health Nguyen Thi Kim Tien was found to have lied about having a brother-in-law who served as former vice-director of a pharmaceutical company whose leaders are being investigated for importing fake cancer drugs.

Documents regarding the drug’s origin, specifications, and quality assurance were forged, while the drugs themselves were found to be 97 percent capecitabine, a low-quality ingredient that is not recommended for humans.

VN Pharma’s general director Nguyen Minh Hung and eight other accomplices were tried and sentenced last week to up to 12 years each behind bars for “trafficking,” a verdict that had been criticized by legal experts as a misinterpretation of the case’s nature.

The High People’s Procurator of Ho Chi Minh City has since announced that it will appeal the case to review relevant evidence.

In a surprising turn of events, Vietnamese Minister of Health Nguyen Thi Kim Tien was found to have lied about having a relative who worked at VN Pharma.

According to Lan, a former deputy director of the Ho Chi Minh City Department of Health, Dung held the position before the firm’s scandal was discovered and did not resign until after Nguyen Minh Hung and his accomplices had been arrested.

Hung confirmed the information for a second time in an interview with Tuoi Tre on Wednesday, saying Dung had worked at VN Pharma “since 2013 or 2014,” and was primarily in charge of the firm’s construction and investment.

The revelation contradicts Tien’s previous claim that she had “no relatives who are leaders at VN Pharma” and her dismissal of such rumors as “fabricated stories."

At a regular government press briefing in Hanoi on Wednesday, Deputy Minister of Health Nguyen Viet Tien defended his superior, saying the minister had “made no mention [of her brother-in-law] and never denied it.”

“I don’t know whether anyone who works at the Ministry of Health is aware of the fact, but I have personally never asked the minister about the issue,” the deputy health minister said.

He added that Vietnam’s anti-corruption laws only ban parents, spouses, and children of high-ranking officials from holding executive positions in the official’s respective fields of governance, with no actual mentioning of in-laws.

“The prime minister has given a directive to open a government investigation into the Ministry of Health’s licensing of drug importation and registration to VN Pharma,” Mai Tien Dung, Vietnamese Minister and Chairman of the Government Office, said at the press briefing on Wednesday. “The investigation will be comprehensive."

“The PM’s stance is to handle this issue until it is resolved and the ultimate truth is uncovered,” he added. “There will be no restricted area’.”