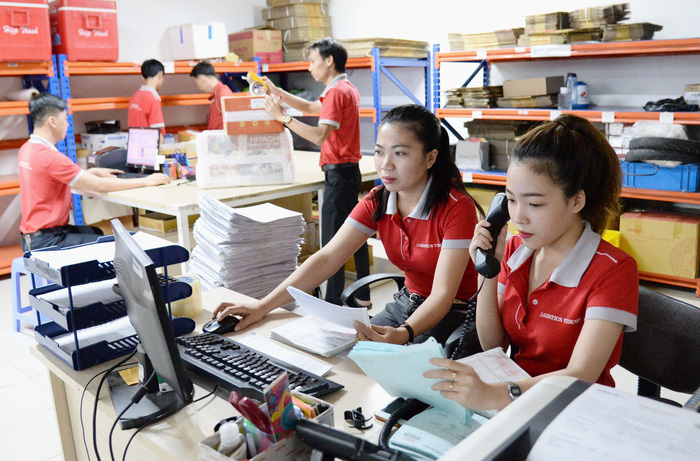 Electronic commerce in Vietnam has grown significantly in recent times and is expecting its heyday in several years ahead, presenting fresh opportunities for online retailers.

Vietnam’s ecommerce growth rate for 2017 was over 25 percent and is likely to remain stable or even become higher between 2018 and 2020, according to an e-business index report formulated by the Vietnam E-commerce Association (VECOM), a non-profit founded in 2007.

E-commerce tends to form online marketplaces which gain the greatest shopping trust from customers, she added.

Non-traditional enterprises have reaped substantial benefits from the upswing.

The number of orders and sales of products from Lazada in the Vietnam market each surged by a massive 100 percent last year, said a representative of the firm’s branch in the country.

Vietnam is a market that no international business giants can afford to miss, commented Tran Ngoc Thai Son, CEO of Tiki, a major Vietnamese online retailer.

VECOM recorded a healthy rise of 62 percent to 200 percent in the turnover of delivery services nationwide.

The association’s figures also showed that several affiliate marketing enterprises – those receiving commission for selling products of other firms – achieved an impressive growth rate between 100 and 200 percent.

E-commerce in Vietnam has long been common as a concept but only started developing about three years ago as an activity, when capital from large companies poured in, noted Nguyen Ngoc Dung, VECOM’s vice-director.

Some famed brick-and-mortar businesses have made forays into e-commerce by introducing their own websites as an adaptation to the new type of selling.

Hien, a Vietnamese woman with two children, has been able to raise her family only from online trading over the past four years.

She fills orders for foreign products from customers by placing orders on websites of overseas companies, earning around US$2-10 for each item.

Mai Chi, owner of a clothes shop chain, said she has been working with online channels and selling on the Internet, even though she already has stores across Ho Chi Minh City.

Over one million Vietnamese pursue online selling as a second job, according to VECOM.

Such people may be considered effective partners and formidable competitors for domestic online channels.