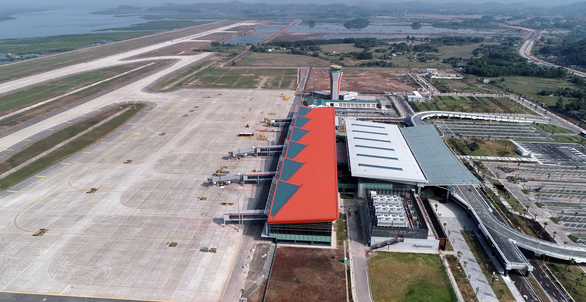 The prime minister praised local officials for their endeavor to allow a private developer to construct Van Don International Airport at the opening event in Quang Ninh Province, which is home to the famed Ha Long Bay.

The top leader also thanked those residents in Van Don District who had agreed to relocate to make way for the airport.

He required that local authorities and the developer ensure the airport would be operated safely and effectively so that Quang Ninh can sustainably develop.

Sun Group, a Vietnamese firm, started building it under the build-operate-transfer (BOT) model in March 2016.

The airport is the second to have been constructed after another one on Phu Quoc Island off the southern province of Kien Giang since 1975, when Vietnam was reunified.

BOT is a form of project financing, wherein a firm receives a concession from the public sector to develop and operate it over a designated period of time before transferring it back to the government.

The airport has a runway 3.6km in length and 45m in width and it is able to welcome large cargo and passenger aircraft, such as the Boeing 787, 777 and Airbus A350.

At the inauguration, the Van Don airport received the first commercial flight, carrying PM Phuc and his entourage, operated by national carrier Vietnam Airlines that departed at 7:20 am on Sunday from Tan Son Nhat International Airport in Ho Chi Minh City and arrived at 9:25 am the same day.

Initially the airport can service nine flight routes and 7,000 passenger visits a day.

Van Don, 551 square kilometers in area, is an island district located to the northeast of Quang Ninh.