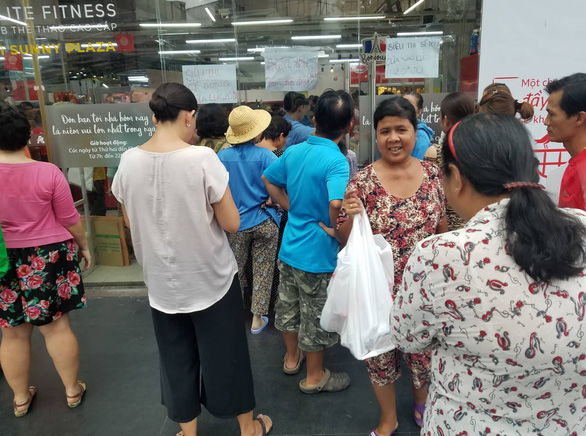 Thousands of Vietnamese consumers jammed Auchan supermarkets in Vietnam on Tuesday, hoping to scoop up their fill of heavily discounted goods ahead of the company’s downsizing its business in the Southeast Asian country.

Auchan Vietnam announced on Monday that it will close 15 of its 18 Auchan stores in the country on June 3, according to online newspaper VnExpress.

The three remaining locations are all in Ho Chi Minh City, two in District 7 and the other in Tan Binh District.

As a farewell to Vietnamese customers, the French retailer discounts huge swaths of its stock from May 20 to 31, according to a representative of the Auchan outlet in Go Vap District.

In turn, crowds of locals flocked into Auchan stores to take advantage of the deals.

At the Auchan location on Pham Van Dong Street in Go Vap District, security had to restrict the number of customers entering the store on Tuesday in order to quell the chaos.

Those who did manage to get inside were left to wander through a desert of empty shelves.

Minh, a shopper at the Go Vap outlet, told Tuoi Tre (Youth) newspaper that “not a single pot was left,” and “there were no instant noodles to buy.”

In the same fashion, a sea of customers scouted the aisles at the Auchan on Cao Thang Street in District 10 where check-out lines stretched dozens of shoppers long.

The most chaotic scene, however, might have been at the Auchan outlet in the southern province of Tay Ninh, where customers took advantage of the crowds to use products right in the store without paying.

According to a Facebook post by a user named Nguyen Ngoc Hong Tham, some children heedlessly opened and drank cartons of milk and canned juices.

Likewise, a family spontaneously picked up and ate food straight from the shelves.

Unsurprisingly, nearly all of Auchan’s outlets ran out of stock on the first day of its 11-day sale.