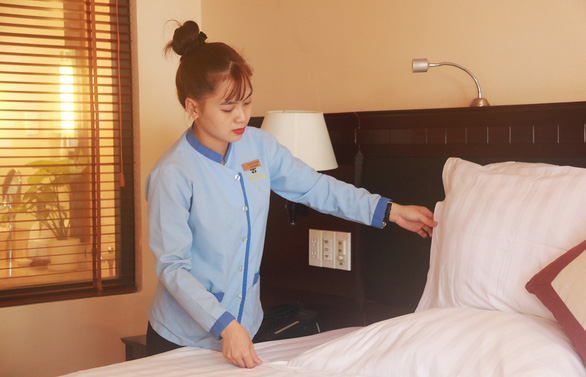 The ‘booming’ tourism segment on the renowned 'paradise island' of Phu Quoc, off Kien Giang Province in Vietnam’s Mekong Delta region, is suffering from a dearth of human resources over high demand.

Phu Quoc Island, 45 kilometers off the west coast of Kien Giang’s Ha Tien City, houses a small population of only 107,000.

The island was connected to the national power grid in 2014 while the new Phu Quoc International Airport had been inaugurated just two years earlier.

Thanks to these infrastructure and transport upgrades, the island has seen a tourism surge.

The number of tourism businesses on Phu Quoc has grown from 176 facilities in 2015 to 726 in 2019, according to the Kien Giang tourism department.

The rapid development of tourism on Phu Quoc has created a high demand for personnel working in the sector.

According to the tourism department of Kien Giang, there are currently about 11,000 people working in the tourism sector on Phu Quoc, barely meeting half of the number of employees needed.

The lack of tourism human resources is one issue faced not only by Phu Quoc but also by many other localities in Vietnam.

Around 15,000 fresh graduates enter the tourism labor force every year, a modest figure compared to the market’s high and growing demand, according to the Vietnam National Administration of Tourism.

Moreover, tourist companies say only 65-70 percent of these fresh graduates are qualified to work for them without further training.

As a Band-Aid solution, many tourism businesses have resorted to hiring part-time employees, with little to no backgrounds in hospitality, to fill in shifts that allow them to run 24/7 service.

This improvisation turns out to benefit both tourism enterprises and local people.

Tran Thi Thu, a 47-year-old housewife who has lived on Phu Quoc for four years, told Tuoi Tre (Youth) newspaper that she earns decently from working in shifts for three different hotels on the island.

“I earn better income from cleaning hotel rooms here than I did doing farming work back in my hometown,” Thu said.

However, as this quick fix cannot completely satisfy the demand for tourism employees, industry insiders say other long-term solutions are urgently needed.