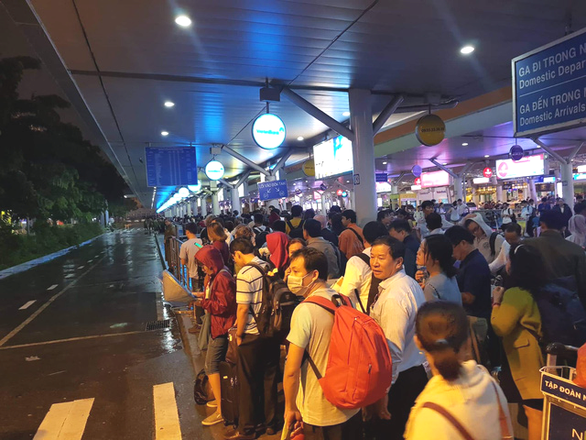 Tan Son Nhat International Airport in Ho Chi Minh City has made a number of adjustments and introduced upgrades said to curb overloading as it braces for the peak Lunar New Year travel season.

As the days until the 2020 Lunar New Year, or Tet, dwindle, the number of passengers traveling through Tan Son Nhat International Airport is predicted to sharply increase over the next few weeks.

January 22, three days before the Lunar New Year which will fall on January 25, is forecast to be the busiest day for the Ho Chi Minh City-based airdrome.

In preparation for this holiday travel season, the operators of Tan Son Nhat International Airport said that national carrier Vietnam Airlines has installed ten more check-in counters and increased the number of self-service check-in kiosks at departure halls in the airport terminals to 50.

The airport has added a new boarding gate, lifting the total number of boarding gates to 21, while rearranging two of them to create more space for passengers waiting to board.

It has also set up five additional security screening lines, installed several 55-inch and 43-inch flight information screens, and added a total of 800 seats at its domestic and international terminals.

Likewise, the number of airport aprons has been raised from 72 lots during the 2019 Lunar New Year to 86 this year.

One change that travelers should take note of is that shuttle buses between the airport and the city center no longer stops at the domestic terminal, only picking up passengers from the international terminal.

Domestic flyers are told to walk from the domestic terminal to the international terminal to catch these buses.

The airport said it also plans to allow 16-seat vans into the domestic terminal for pick-up and drop-off to help reduce congestion.