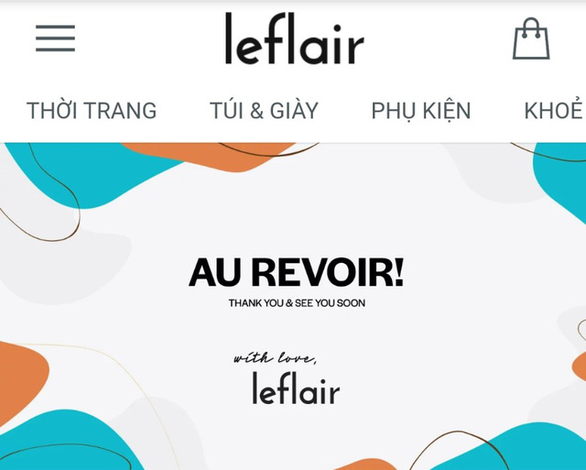 Vietnam-based ecommerce company Leflair has shuttered its office while being alleged to owe US$2 million in liabilities to about 500 suppliers and many customers.

Leflair, an online platform that sourced goods from brands and official distributors and resold them to Vietnamese customers, has ceased its local business operations since the beginning of February, according to a notice sent to its suppliers about the closure.

Founded in December 2015, Leflair followed the flash-sales model that has proven successful in Europe with Vente-privee.com from France being an instance.

The startup offered a wide range of worldwide branded merchandise, from fashion and beauty to home, such as Calvin Klein, Botanist and Moleskin, to Vietnamese consumers at attractive prices.

According to the suppliers, Leflair representatives admitted at a meeting with them that the company was subject to a capital crunch and seeking funding from different investors.

Particularly, the ecommerce platform owes $2 million in outstanding debts to about 500 merchants while having less than $50,000 in its cash account.

The firm has since also tried to offer the suppliers some options to resolve the debts.

A supplier for Leflair told Tuoi Tre (Youth) newspaper that the company promised to pay all the debts and continue its ecommerce platform once it could reach a purchase deal with investors.

However, suppliers now feel worried after they found out that Leflair’s office in District 10, Ho Chi City, has been closed since Sunday.

Its website leflair.vn has also been inoperative with only a message “Thank you & See you soon!” seen on its front page as of Tuesday morning.

The company had previously promised to pay off its debts to suppliers before shutting down the website.

Leflair also allegedly owes salary to its employees and money to its customers, failing to reimburse buyers for recent orders canceled by the company despite having accepted payments for the orders.

Hong, a Leflair customer who had paid for three orders worth VND2.2 million ($94.86) made on Leflair, told Tuoi Tre she has so far been unable to contact the company for a refunD.

Since its foundation, Leflair has targeted the rising middle class in Vietnam who are willing to pay for premium products.

It most recently raised $7 million in series B funding from Belt Road Capital Management and South Korean retailer GS Shop.

While Vingroup merged the Adayroi website with its fintech arm VinID, Lotte blended its marketplace lotte.vn with SpeedL, the online version of its supermarket chain.

Furthermore, Vietnam witnessed a spate of closures including Beyeu, Deca, Lingo, Hotdeal and Muachung back in the 2016-17 period.