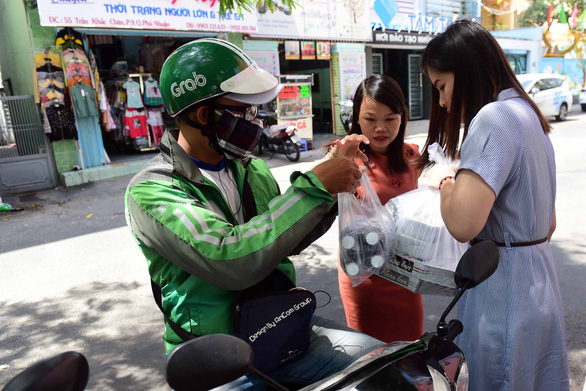 Delivery workers in Vietnam’s thriving e-commerce industry increasingly expect their customers to transfer their goods and shipping fees online instead of paying them in cash, for fear of transmission amid the novel coronavirus disease (COVID-19) pandemic.

A sudden downpour wetted the streets of Ho Chi Minh City on Wednesday. Nguyen Van Hai, a deliveryman at Giaohangnhanh, a Vietnamese logistics service provider, was trying to wear his raincoat so that the goods on his old scooter would not become drenched.

“The rain is so heavy that I will deliver your goods around one hour late. I am sorry for any convenience caused!” Hai spoke to a lady on the phone.

After hanging up the phone, he told Tuoi Tre (Youth) newspaper that the job requires him to deliver goods as soon as possible.

Once he has closed a deal with his customers, he will deliver it whether it is sunny or rainy.

He said as a deliveryman for around one year, he has learned many unforgettable lessons, such as loss of goods, intentional non-delivery, and his customers unable to pay their fees.

It seems to him everyone thinks that delivery workers ‘hit the mother lode’ because of an upsurge in delivery demand on account of COVID-19.

Little do they know that there are many unseen worries. His work demands that he meet face-to-face dozens of customers on a daily basis, which increases the risk of COVID-19 infection for himself and his own family.

Counting money is another issue when contacting customers.

“I dreaded every time I had to count money or give change to the customers. Even with a hand wash right after, I still worried loads,” he said.

Hai said he has to put down a deposit’s worth of goods for store owners in case customers cancel their orders.

As usual, delivery workers pick up orders at the declared business locations, but many businesses would be based at a coffee shop, a curbside location or even a fake address.

As the deliverymen come to the addresses, the customers would sometimes refuse to pick up the phone, or the addresses might not even exist.

Once Hai looked at the delivery items, he found them to be knock-offs.

“When I finally knew that I got duped, collecting the deposit was then like getting a camel through the eye of a needle. Most of the time, the delivery workers have to bear the brunt because they cannot find any information on the goods senders,” he said.

Every time the phone goes ‘ding,’ Bui Pham Thien Long, a delivery rider for on-demand meal delivery service GrabFood, jumps for joy, but more often than not that joy may be replaced by concerns over his customers choosing to pay in cash for food orders.

For around three years having worked for all kinds of Grab’s services, namely GrabBike, GrabExpress, and GrabFood, Long has still dreaded the thought of customers failing to keep in contact with him.

He explained a new order would have him running errands in the blazing heat for the customers, but sometimes they just would not come out of their houses or pick up the phone.

“Some folks would keep me waiting for nearly an hour under the scorching summer heat, but later refuse to take their orders,” he said.

“In those cases, I have no other choice but to return the items. Some days you just got unlucky and had a chain of order aborts. I would just cry on those days.”

Customers are increasingly choosing electronic wallets as an alternative payment method in order to minimize physical contact, according to several workers of other delivery services, such as Now, Foody and Baemin.

With these pre-paid orders, delivery workers can be assured that the deliveries are 100 percent confirmed without any fear of ‘order aborts.’

With card payment, at least the names of the customers are known, so delivery riders seem to be more at peace with their deliveries.

On a similar note, ride-sharing drivers for Be, Grab, and VATO said that they prefer ‘card’ customers to ‘cash’ ones.

A recent study of consumer habits during the COVID-19 pandemic by ride-hailing firm Grab reveals that online shopping has grown considerably in popularity, which helps promote cashless transactions.

The number of customers who use cashless payment on Grab for the first time in March surged by 22.5 percent, compared with the previous month, according to Nguyen Thai Hai Van, managing director of Grab Vietnam.

She said cashless payments accounted for a staggering 43 percent of the total transactions on the Grab platform during the COVID-19 outbreak.

At one point the percentage rose by as much as 10 percent, much greater than the average rate, according to the Saigon Union of Trading Cooperatives (Saigon Co.op), the owner of the Co.opmart supermarket chain.

However, the figure is only recorded during the promotional season when many cash-back and incentive programs for cashless payment are available.

Once these programs end, the method of payment will fall back to its usual place.

Cashless payment is a necessity

Grab Vietnam has encouraged its customers to use either electronic wallet Moca or their own credit cards to pay for its delivery services in order to enhance public health and curb the spread of the novel coronavirus, managing director Van said.

The encouragement is in line with instructions from the State Bank of Vietnam in an attempt to promote a cashless economy in the Southeast Asian nation.

“We have quickly put forward many new initiatives while developing all services in order to meet the essential needs of our customers in their daily lives,” she said, adding that this the quickest way to fuel the growth of the cashless economy.

Everyone has a card now, but...

While raising the awareness about the convenience of cashless payment, Do Quoc Huy, marketing director at Saigon Co.op, urged local firms to work with each other to introduce more attractive promotion programs.

They should run such programs in the long run so their consumers can have a chance to get first-hand experience and thus change their behaviors on a gradual basis, according to the director.

During the pandemic, people avoided paying in cash. Once social distancing measures were lifted, the old habit of cash payment came back anyway.

“We should be determined in our sustained efforts to encourage cashless payment,” Huy said.

Despite credit and ATM cards being almost universal, cash remains the king of all transactions in Vietnam.

“It is essential to develop infrastructure which makes it convenient for customers to pay with different methods,” he said, adding that this will reduce reliance on cash.

Doctors save newborn with organs outside of belly in Vietnam