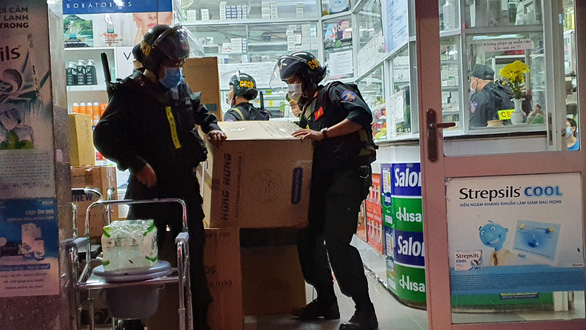 Police in the southern province of Dong Nai launched raids on medical supplies stores belonging to the locality's largest drug firm to examine product origin and quality issues, seizing 220 large packages of medicine worth about VND5 billion (US$216,108) on Friday night.

These drugstores are operated by Son Minh Pharmaceutical Company, which is based in the same city and is considered as the largest pharmaceutical firm in Dong Nai.

In addition to retail business, the company also supplies drugs and medical equipment for many clinics and hospitals in the province.

Friday night’s examination last for several hours before police officers sealed off and took away 220 large packages of medicine, functional foods, and medical instruments, along with many carton boxes of documents for further investigation.

The value of the confiscated items is estimated at about VND5 billion.

Preliminary information from the police showed that the owners of the aforementioned pharmacies failed to present invoices and related documents for the medical items upon the functional forces’ request.

The police said they will continue to coordinate with specialized agencies to clarify the origin and quality of the confiscated medical items.

The police also affirmed that some pharmacies in the locality buy and sell drugs and functional foods of unknown origin, which seriously affect consumers’ health.