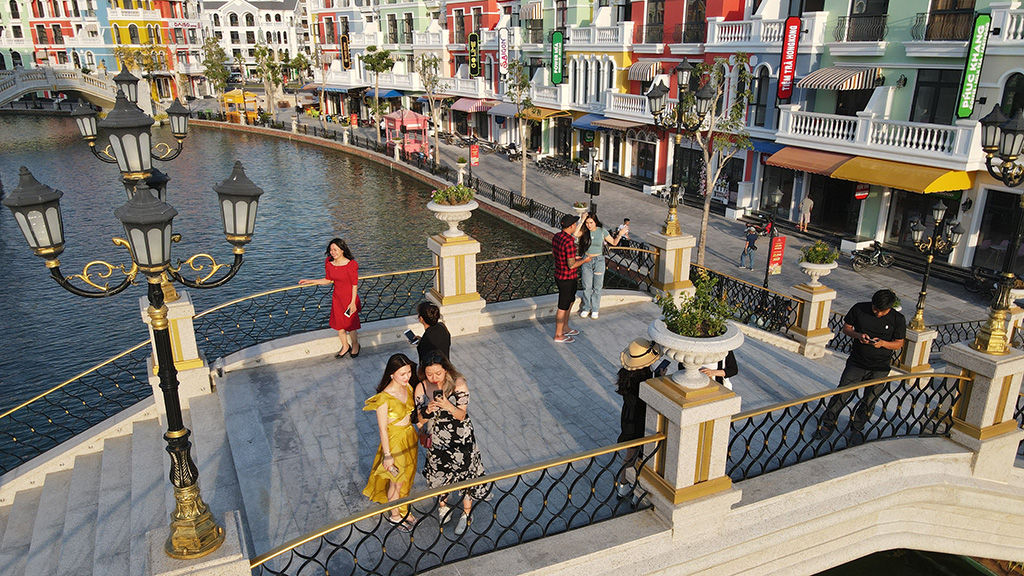 The foremost requirement for a ‘sleepless city’ is to be a shopping paradise where tourists find it easy to gain access to products of reputable brands with transparent price listings so that they feel happy to spend money.

The Vietnam National Administration of Tourism (VNAT) affirmed that the night-time economy is not only the right direction for the tourist industry, but also a driving force for future economic growth.

According to a study by the VNAT, accommodations account for 32.96 percent of overnight tourists’ total holiday expenditure, the highest percentage among all other categories.

Food and drinks make up 23.78 percent whereas shopping and transportation occupy the same share -- more than 15 percent.

Meanwhile, day visitors set aside 55.85 percent of their budget for shopping, 22.84 percent for food, and 10.35 percent for traveling.

The combined spending on cultural, sports, entertainment, sightseeing, medical, and other services is equal to 10.82 percent.

This spending structure does not contribute to sustainable tourism development, according to tourism and travel business insiders.

On the contrary, the structure has reached its limit, making it difficult for the industry to expand without the introduction of new products, especially in the post-pandemic period.

Currently, in order to stimulate demand, hotels and accommodations have to make attractive offerings or promotions, resulting in shrinking spending on lodging.

According to a representative of the Ho Chi Minh City Department of Tourism, a scheme to test the pedestrian zone on Bui Vien Street in District 1 has fueled local economic activities despite its inadequate quality.

About 350 business establishments along this street, including restaurants, hotels, bars, travel operators, and accommodation providers, have contributed billions of Vietnamese dong to the local budget, with the industrial and commercial tax sum reaching about VND6 billion (US$260,660) in 2019.

Regarding Phu Quoc Island off southern Kien Giang Province, a representative of Phu Quoc United Center said that partners, traders, and retailers have played indispensable roles in the construction of a ‘sleepless city,’ which includes a shopping paradise on the Grand World commercial streets as part of the ‘one destination for all needs’ model.

Around 1,000 shophouses providing an ecosystem of thousands of utilities and entertainment items not only fully meet the needs of enjoyment, entertainment, relaxation, and discovery of all visitors, but also bring new experiences.

“The availability of many world-famous retail brands affirms the professionalism and methodical operation of the project," said the Phu Quoc United Center representative.

"These brands have been well received by millions of shoppers, bringing visitors peace of mind instead of worry about overcharging and low-quality goods,” said the Phu Quoc United Center representative.

Where to spend money in the ‘sleepless city’?

According to Pham Trung Luong, former deputy director of the Institute for Tourism Development Research under the VNAT, in many countries with strong night-time economies, casinos and nightlife are considered the biggest source of revenue for tourism.

Statistics show Singapore’s tourism industry revenue grew 25 percent in the four years since the first two resort-casino complexes opened in the city-state in 2010.

The hotel department under the VNAT said there must be a wise way of service and product provision, creating highlights according to local characteristics in order to develop a night-time economy.

To do this, first of all, research must be carried out to localize and diversify services and products in the best way so that tourists will not get bored of the same activities, particularly including karaoke, bars, night markets, and food streets, after a while.

Visitors to the ‘sleepless city’ will be attracted to a very vivid life with an intertwined variety of cultural, entertainment, and shopping experiences.

Visitors will also be able to enjoy night cuisine with many different dishes.

The Phu Quoc United Center representative said the operator of the project had worked with many partners as well as fashion and convenience retailers in preparation for its opening day.

In addition, more than 700 shopping stalls at VinWonders and a food zone consisting of a seafood street, a night market, a BBQ garden, famous culinary brands, attractive food courts, and interesting beach clubs are waiting for the ‘night city’ to light up on Wednesday.

Do not miss a second

Over the past few days, tourists have flocked to Phu Quoc to visit the constructions exquisitely built according to European architecture standards in the first ‘sleepless city’ in Vietnam, while eagerly waiting to enjoy delicious dishes at its night market.

Vu Thi Thanh Van, a visitor from Hanoi, said that both she and her husband love traveling, especially to explore the beautiful scenery and people in Vietnam, so much that her family decided to visit Phu Quoc for the holiday of Hung Kings’ Festival.

“I’m surprised and amazed by the scenery and European-style houses here. Everything is so great, from the amusement park to the luxury entertainment quarter,” Van said.

Van added that beside VinWonders and Vinpearl Safari, she enjoyed visiting Grand World, where she was able to witness the hustle and bustle of workers racing against the clock to complete the very last work items of luxury shopping and dining establishments for the launch day on Wednesday, with a series of events, entertainment, and services for visitors.

Lu Thi Tuyet, a tourist from northern Son La Province, who visited Phu Quoc with 300 other companions, commented that she was so excited and the scenery there was beyond her imagination.

“I just arrived in Phu Quoc today, checking in at the hotel with everyone and then rushing into the sea immediately,” Tuyet said.

She added that she would also spend time shopping as “it is the biggest fun to go shopping during holiday trips.”

According to the Department of Tourism of Kien Giang, in the first quarter of 2021, the province welcomed 1,178,395 visitors, with Phu Quoc receiving up to 810,385 arrivals, accounting for nearly 69 percent of the total.

On weekends, it is estimated that Bui Vien Pedestrian Street in Ho Chi Minh City receives more than 2,000 domestic and foreign visitors, who shop and enjoy tourism products and services.

“Ho Chi Minh City realized the need to organize entertainment activities on the pedestrian street to promote culture and attract tourists to spend their money on shopping there. However, the street space is limited, leading to the shortage of service diversity,” a representative of the Ho Chi Minh City Department of Tourism said.

Therefore, the advent of entertainment complexes operating around the clock in tourist destinations is the answer to the question on where tourists can spend their money from 6:00 pm to 6:00 am the next day.