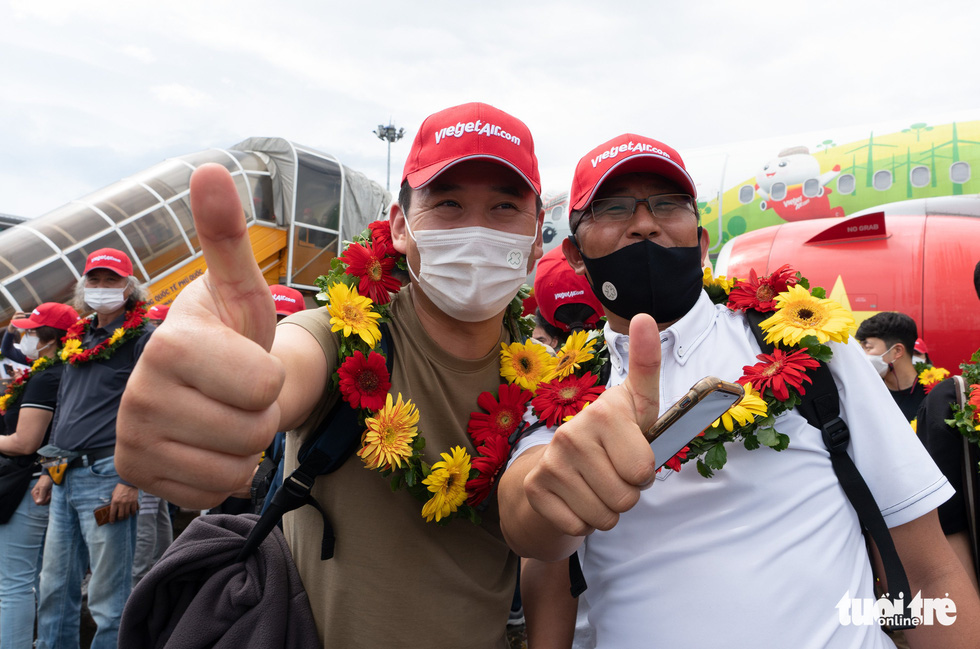 A total of 204 South Korean travelers landed on Vietnam's Phu Quoc Island on Saturday, becoming the first foreigners to visit the island city under a vaccine passport pilot program after 20 months of closure due to COVID-19.

The tourists, who arrived on a Vietjet flight from Seoul, were warmly welcomed by authorities at a ceremony at Phu Quoc International Airport, where they were greeted with a water salute and received flowers and gifts from their hosts.

They began enjoying their package tour of four days and three nights, without quarantine, under the vaccine passport pilot program intended for those carrying certificates of full COVID-19 vaccination.

Following another group of foreign travelers who visited Quang Nam some days ago, this group is the second to visit Vietnam since March 2020, when Vietnam closed its borders because of the pandemic.

They were tested for the novel coronavirus on arrival and those with negative test results can visit such attractions as Phu Quoc United Center, Vinpearl Golf Phu Quoc, VinWonders Phu Quoc, Vinpearl Safari, Corona Casino Phu Quoc, and others.

Another COVID-19 test will be conducted before they leave the island on the last day of their tour.

Jacob Yoon, one of the visitors, said he was very happy to join the tour to Phu Quoc, administered by Kien Giang Province in southern Vietnam, where he will enjoy the fresh air and join outdoor activities.

The traveler also said he and his friends will come back to the island in the future.

“This is the first event under the vaccine passport pilot program applied on Phu Quoc in particular and in Vietnam in general, marking the efforts to revive the tourist industry while reopening and developing the economy step by step,” said Nguyen Trung Khanh, chairman of Vietnam’s Administration of Tourism, at the ceremony.

With close cooperation between businesses and government agencies, Phu Quoc can receive and serve up to 400,000 tourists by year-end, said Nguyen Luu Trung, deputy chairman of the Kien Giang administration

In a press release on Saturday, Vietjet managing director Dinh Viet Phuong said his carrier has been ready to resume international services to bring tourists back to Vietnam.

A Vinpearl JSC representative said the firm has cooperated with its strategic partners in South Korea, as well as with Marketing Highland Travel Co. Ltd. and Vietjet to set up the Phu Quoc tour for the South Korean travelers.

Phu Quoc authorities completed fully vaccinating all residents aged 18 and older on October 29 to prepare for taking in foreign visitors, the Kien Giang Department of Health.

Phu Quoc, previously a district of Kien Giang, was turned into the country’s first island city on March 1 this year, pursuant to a resolution issued by the National Assembly’s Standing Committee in late 2020.

The province is one of five localities that have got the green light from the central government to welcome back fully immunized foreign tourists from November, along with Quang Nam, Da Nang, Khanh Hoa, and Quang Ninh.

The Southeast Asian country has documented 1,084,625 coronavirus cases, including 900,337 recoveries and 23,685 deaths, since the pandemic hit it in early 2020, the Ministry of Health reported.

The nation has recently seen its COVID-19 death toll sharply drop, to 107 on Saturday from 215 two months earlier, despite its daily infections gradually increasing again from mid-October.