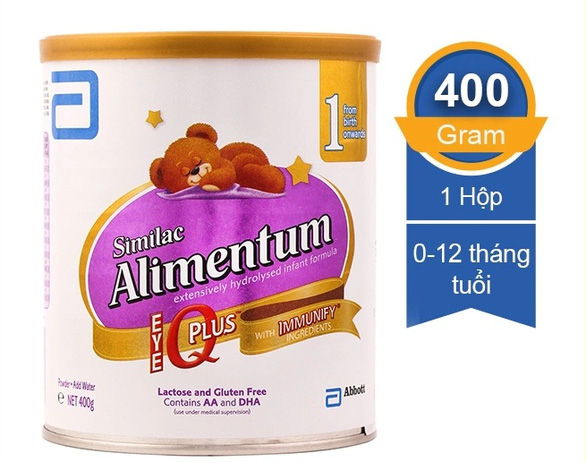 The representative office of Abbott Laboratories GmbH in Hanoi has announced a voluntary recall of six lots of Similac Alimentum Eye-Q products in Vietnam as they potentially contain two kinds of dangerous bacteria, Vietnam’s food safety authorities have reported.

These lots of powdered infant formula, intended for children aged 0 to 12 months old, were produced by an Abbott Nutrition facility in Sturgis, Michigan, the U.S., according to the Vietnam Food Safety Authority (VFA) under the Vietnamese Ministry of Health.

A total of 11,320 cartons of Similac Alimentum Eye-Q, with six 400-gram cans per carton, has been imported into Vietnam by Ho Chi Minh City-based 3A Nutrition (Vietnam) Company Limited.

Among the total, 7,050 cartons have been launched onto the market, according to the representative office.

As of February 21, 1,194 out of the 7,050 cartons had been determined not yet to be sold to consumers and have been asked to be kept for recall, according to the office.

The importer has sent a notice to its customers about the recall of this infant formula item in Vietnam.

Earlier on February 20, the VFA was notified by the International Food Safety Authorities Network (INFOSAN) that four American infants have been infected with the two harmful bacteria, Cronobacter sakazakii and Salmonella Newport, after consuming powdered infant formulas produced by Abbott Nutrition in the U.S.

One of them has died and the manufacturer initiated a voluntary recall of three potentially affected products including Similac, Alimentum, and EleCare manufactured by the said Abbott Nutrition facility.

These products have been exported to Vietnam and the potentially affected products have a code on the container beginning with the first two digits of 22 through 37 and also containing K8, SH or Z2, the producer said, noting they have an expiration date of April 1, 2022, or later.

Upon receipt of the information from INFOSAN, the VFA immediately requested the importers of such powdered infant formulas to urgently recall them from the Vietnamese market.

In a press release on February 17, the U.S. Food and Drug Administration (FDA) said it was investigating complaints of four infant illnesses from three states, and advised consumers not to use the products subject to the recall.

“All four cases related to these complaints were hospitalized and Cronobacter may have contributed to a death in one case,” the agency stated.

Cronobacter bacteria can cause severe, life-threatening sepsis or meningitis, whose symptoms may include poor feeding, irritability, temperature changes, jaundice, grunting breaths, and abnormal movements, according to the FDA.

Meanwhile, salmonella is a group of bacteria that can cause gastrointestinal illness and fever called salmonellosis, which leads to diarrhea, fever, and abdominal cramps in most infection cases, the FDA warned.

In severe cases of salmonellosis, patients may have high fever, aches, headaches, lethargy, a rash, blood in the urine or stool, and it may become fatal in some circumstances.