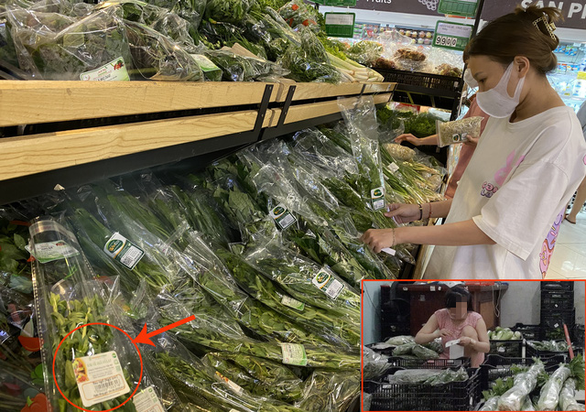 Trinh Nhi’s vegetable products were found to be allegedly sourced from wholesale markets and failed to meet VietGAP standards but were labeled with VietGAP tags and supplied to local supermarkets.

VietGAP is short for Vietnamese Good Agricultural Practices, or the application of production methods to turn out clean and safe fruits and vegetables.

WinCommerce also requested Trinh Nhi to explain its violations against its commitments to the quality and origin of products as stated in their contract.

The retail giant will provide more information later on.

WinCommerce affirmed this is not its business policy, saying that it always complies with regulations on food safety with its strict quality control process to protect consumers’ health.

The group also claimed responsibility for the issue and promised that it will review all remaining suppliers and tighten its quality control.

Many consumers are willing to pay higher prices for vegetables meeting safety or VietGAP standards. However, they never imagined that some companies might take vegetables from wholesale wet markets, randomly put VietGAP labels on them, and then sell them to supermarkets.

Investigating a vegetable processing unit located at the headquarters of Viager Co. Ltd. in Binh Chieu Ward, Thu Duc City, a district-level unit under Ho Chi Minh City, between August and mid-September, Tuoi Tre's undercover reporters learned how the facility turned vegetables bought from wet markets into VietGAP products and claimed they had sourced them from Da Lat City, a clean greens hub.

Every day at 10:00 pm, a man stopped his old motorbike in front of the processing unit, unloaded large bags of vegetables, and weighed them.

An old female worker named L. hurriedly recorded the vegetable volume before asking other workers to check whether the vegetables were withered or bruised.

After receiving batches of vegetables, including spring onion, coriander, dill, perilla, and basil, from the man, some workers discarded withered leaves while others packed the remainder.

From 11:00 pm to 3:00 am, several other people also handed over vegetables, such as mustard greens, amaranth, water morning glory, bitter melon, gourds, pumpkins and carrots. Workers later continued processing and packing them.

The processing unit even appointed an employee named Th. to negotiate, buy, and change vegetables with these delivery men.

Between 6:00 am and 8:00 am, workers of the processing unit stuck labels on vegetable bags and promptly handed them to drivers who transported the vegetables to supermarkets.

The labels include the phrase ‘vegetables from Da Lat,' the information about Trinh Nhi Company, and even the VietGAP logo issued by the Vietnamese Ministry of Agriculture and Rural Development.

Trinh Nhi’s vegetables are found to be supplied to well-known and large retailers.

The truck driver and many employees loaded vegetables on the vehicle.

The first destination of the truck was the Linh Xuan Warehouse and Logistics Center on National Highway 1 in Thu Duc City.

At the center, D., an employee, said this was the vegetable and fruit warehouse of WinMart for the central and southern parts of Vietnam.

D. said he had repeatedly informed Trinh of the poor quality of the vegetables. He even showed his text messages with Trinh.

In addition, the packaging dates on the labels on vegetables were in the future. In other words, the products are delivered today but the printed packaging date is the next day.

Employees there said it was the warehouse of Tiki Ngon, an arm of the ecommerce platform Tiki, and showed a list of vegetables bought from Trinh Nhi.

On another day, the delivery driver was found to be traveling to a 3Sach food store on Hoang Dieu Street in District 4 and another on Tran Nao Street in Thu Duc City.

One night, a vegetable delivery man said the herbs he transported to the vegetable processing unit in Thu Duc originated from the southwestern region.

If the unit needs any kind of vegetables, he will help buy them.

He added that he and his wife sell vegetables at Thu Duc wholesale market, which is several hundreds of meters from the processing unit.

In August, the Tuoi Tre reporters came to the vegetable stall of the delivery man and said they wanted to buy vegetables for sale in supermarkets.

She said her husband regularly hands over vegetables to the above-mentioned processing unit and they know that the unit purchases vegetables for sale to supermarkets.

As for the origin of her products, she said she buys them from any source with low prices in Binh Chanh District, Ho Chi Minh City; Da Lat; Vung Tau; and Tien Giang to compete with other traders at the wholesale market.

When asked if the vegetables meet VietGAP or other standards, the trader said ‘no’ with a shake of the head.

“In general, we just buy the products. We do not have any certificates. Neither do others at this market,” she added.

After determining the specific position of the vegetable stall, the Tuoi Tre reporters kept a close watch on the process of transporting vegetables from the wholesale market to Trinh Nhi Company.

At 9:00 pm on August 24, G. and her husband arranged vegetables in a basket tied on a motorbike without a number plate.

The vehicle ran from the wholesale market to the processing unit, where its workers weighed and processed the vegetables.

The reporters on September 4 returned to ask G. about the VietGAP certificate, G. said farmers plant vegetables on a large scale and do not register for certificates, so they cannot provide them for traders.

Being asked about the supply of VietGAP vegetables, G. said the market sometimes fails to supply enough vegetables.

The trader also said it is normal when her customers buy vegetables, stick VietGAP labels on them, and sell them to supermarkets at high prices as they have to spend money hiring processors, inventory managers and accountants, and buying packaging products.

Meanwhile, most customers doing the shopping at supermarkets are rich and upper-class people. Thus, “VietGAP labels are aimed at ensuring supermarkets’ business."

However, she affirmed that her company signed contracts to buy only products meeting VietGAP standards from Thu Duc wholesale market.

Meanwhile, the trader providing vegetables to Trinh Nhi Company said they have no VietGAP certificates for their products.

T., owner of a vegetable stall at Thu Duc wholesale market, said she could provide VietGAP certificates but the certification is used for bad situations only.

T. added that many distributors choose greens at wholesale markets due to their low prices. They find it hard to compete with their rivals if they supply high-cost VietGAP products.

Many traders at Thu Duc wholesale market have also packed vegetables in small trays weighing 300-500 grams each and supplied them to food stores and minimarts in apartment buildings.

Introducing trays of tomatoes, baby cucumbers, carrots, bell peppers, bitter melons, courgettes, and corns with VietGAP labels, B. said that the vegetables were mainly sourced from Da Lat. Only bitter melons were purchased from the southwestern region of the country.

Despite them being marked with VietGAP labels, she admitted no vegetables at this market meet VietGAP standards.

Explaining why she does not sell VietGAP vegetables, the trader said their prices are high.

“The prices of goods sold at traditional markets fluctuate daily while the prices of VietGAP products are fixed, so they cannot be sold at the markets,” she said.

Most buyers at the wholesale market care about prices first. It is not important if products meet VietGAP standards or not. VietGAP vegetables are rarely available at the market and they have no buyers, the trader added.

At another stall, Th. introduced many kinds of vegetables, including hydroponic ones.

Besides a few trays of vegetables labeled with VietGAP tags, others are stamped with tags containing the phrase 'Da Lat clean vegetables' and the vendor’s phone number.

However, just some products were packed in and transported from Da Lat.

“Labels are not important. Many people like the labels. VietGAP labels can be put on products easily,” Th. shared frankly, adding that no one at the market vends VietGAP goods.

Meanwhile, on the website of Trinh Nhi Agricultural Products Co. Ltd., it proudly states that “all products of the company are strictly controlled, from input materials to the production process to ensure the quality for consumers."

In addition to the Da Lat origin and Global Gap certificates, the company boasts that it has received the ISO 22000:2005 certificate for its food safety management system and the VietGap certification.

Besides being labeled with VietGAP tags, vegetables bought from wholesale markets were put on a dirty floor when being processed, while workers wore shoes and walked on the floor.

Unpacked vegetables would be left on the floor to be packed the following day.

Meanwhile, vegetables meeting VietGAP standards, after being harvested, must be processed, classified, cleaned, packaged, sealed off, and transported to outlets within two hours after being packaged to ensure hygiene and safety.

VietGAP vegetables are kept at 20 degrees Celsius for no more than two days.

Furthermore, workers have to process some 650 kilograms of vegetables or more than 90 kilograms per person daily. They were asked to buy gloves themselves so most of the workers chose not to wear them to save money.