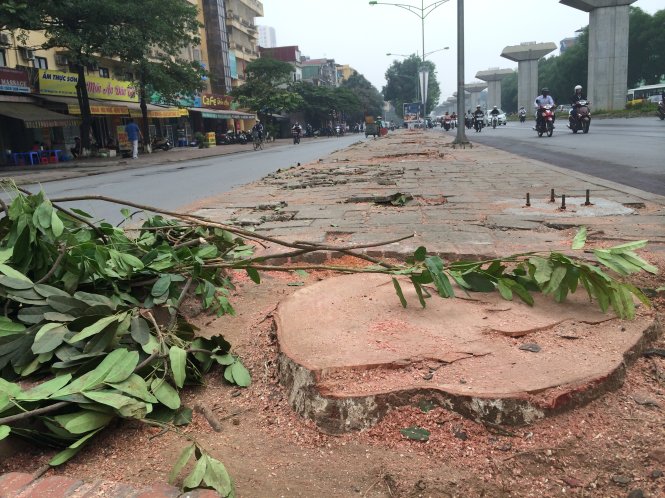 On the slaughter of trees in Vietnam capital

HANOI – If you aren’t up to date on the saga of the Great Hanoi Tree Slaughter of 2015, the latest development (as of this writing) is that Nguyen The Thao, chairman of the Hanoi People’s Committee, has ordered suspensions for several officials involved in the suspended plan to replace thousands of mature trees as part of a VND60 billion (US$2.82 million) “beautification” plan.

>> An audio version of the story is available here This comes after the dismay of civic-minded business folks who say city officials unjustly blamed them for “pressuring” them to order the arborcide. “It seems we have turned from tree planters into illegal loggers,” huffed VPBank’s director of marketing and media relations after public outrage halted the plan.

Finger-pointing is the order of the day. Authorities insisted that only problematic trees have been targeted for replacement, and that proper procedures have been followed. But tens of thousands of Hanoians don’t seem to trust them. There’s a Facebook group that, translated from Vietnamese, is called “6,700 People for 6,700 Trees,” which has me imagining an army of people chaining themselves to trunks. But actually, more than 56,000 people have tapped the “like” button. As it happens, I first learned about the imbroglio through another Facebook group, Hanoi Massive, a site popular with expats and Vietnamese who are comfortable conversing in English.

All things considered, it’s heartening to see how the Hanoi Chainsaw Massacre has brought out Vietnam’s tree huggers. The trees that have already been executed did not die in vain, for their peers have been granted a reprieve because Hanoians have raised their voices. Vietnam is a land of great natural beauty and people working to protect both the rural and urban environments. What with the rampant littering and public urination, it’s great to see Hanoians rally around the greenery that is much too sparse in a gritty city now becoming more crowded and polluted.

Speaking of fingers, consider the ones that tapped that “like” button. Consider the fingers that tapped out the blog postings and the comments. This is also heartening. The public outcry wasn’t just a victory for the trees, but for the rising influence of social media in Vietnam.

This is, I submit, a positive and perhaps inevitable step in a society where the young adults have come of age with the power of the World Wide Web at the fingertips of hands that clutch smartphones.

Allow me to offer an American perspective: For decades I doubted whether I’d live to see an African American elected president. Now President Obama is deep into his second term – and it may not have happened without an online liberal advocacy group called MoveOn.org. I first encountered MoveOn as a journalist covering hi-tech policy and politics for a San Francisco-based tech business magazine. Its roots were humble. When Congress was pondering whether to impeach President Clinton for lying under oath about his sexual liaison with a White House intern, an Internet-savvy couple created an email petition called “Censure and Move On.” The petition went viral; more than 400,000 signatures were presented to Congress.

Clinton was impeached anyway, but his rivals suffered a backlash. Clinton exited office with very high approval ratings and that petition drive had morphed into MoveOn.org – a new kind of political machine, now with more than 7 million people on its mailing list. A few years later, MoveOn unsuccessfully rallied opposition to President Bush’s plan to invade Iraq. But eventually MoveOn’s anti-war energy was channeled to the presidential candidacy of Senator Barack Obama, helping to lift him to a come-from-behind win for the Democratic Party’s nomination and later the White House.

In the spirit of the Internet, I decided to do a little reporting via Hanoi Massive – posing a question to “crowdsource” my hunch that social media had mobilized the tree huggers.

Maybe yes, maybe no, said somebody named Truong: “Beside social media, there were experts and scientists, important people raising their voices and sending letters to the government; newspapers constantly putting pressure on city officials.”

My friend Vinh was more specific: “Some intellects like Professor Ngo Bao Chau went first, both on his FB and mainstream media, taking the lead for social media to accelerate the pressure on Hanoi authorities - so in this case, the role and responsibilities of the intellects are highly regarded.”