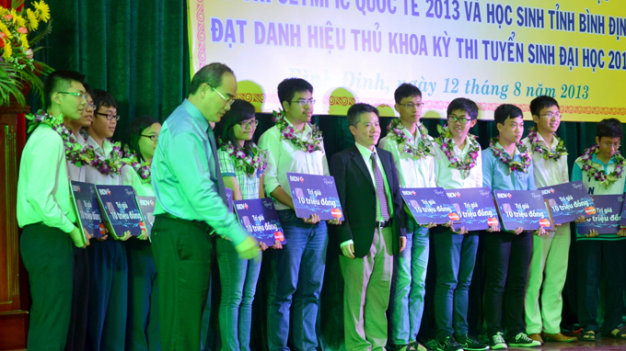 Editor’s note: Nguyen Dinh Phuong, 32, visualizes that in the next two decades, Vietnamese scientists will have higher academic standing, with some honored with the most-coveted Nobel Prize, in his submission to the “Ky Vong Viet Nam 20 Nam Toi” (“My Expectations for Vietnam in 20 Years”) writing contest.

I’ve dreamed that Vietnamese scientists would be accomplished achievers 20 years from now, and some of them would take home the prestigious Nobel Prize.

Hopefully the laureateship would become true and motivate Vietnamese science to soar to a new height.

Vietnamese students have always claimed top prizes at the International Olympiad contests and won respect from academics in other countries.

Many local educators were delighted at Vietnam’s 12th position in rankings published by the Organization for Economic Cooperation and Development recently. The organization also placed Vietnam above the U.S. regarding math. This has spoken volumes about Vietnamese people’s brightness, and the country’s scientific and educational strides.

However, in the basic research area, Vietnamese scientists still find Nobel awards in science a far-fetched dream. There are many reasons behind Vietnamese intellectuals’ failure to realize their Nobel dream, but the main reason is the country’s inadequate science and inefficient scientific investment.

It can be said that Vietnam currently boasts substantial scientific and technological infrastructure, including hi-tech parks, institutes, research centers and state management agencies in science and technology from the central to grassroots level.

Every year, the government spends considerable sums investing in infrastructural facilities and carry out programs, projects and scientific research at different levels.

However, research efficiency remains limited, as the results from many programs and projects still fail to be applied to reality.

Local science intellectuals are bulging with a staggering number of professors and doctorate holders. However, in today’s context, many ponder what they are doing. They have conducted limited breakthrough research and hold few globally-registered patents.

Training and rewarding academics remain inadequate, with the management mechanism sluggish to change.

Vietnam abounds in talented, dedicated people who are ready to contribute to the country’s development.

The mechanism should undergo massive changes so that the country can make the most of the talent of such internationally-recognized researchers as Professor Ngo Bao Chau and Professor Dam Thanh Son, and the future generations.

I aspire that in the next 20 years, along with notable socio-economic strides, these weaknesses would all be solved. Science would then properly cater to the basic requirements of a modernized, industrialized country. This would also provide a solid foundation for science to emulate those of advanced countries in the region and the world, and make breakthroughs to step closer to their Nobel dream.

I think basic measures should be taken to realize this dream.

First, let’s discuss measures to improve policies and the financial mechanism, and facilitate the flourishing of fundamental sciences.

Such measures include order placement and tendering in scientific research, offering flat rates based on research results, and saying no to ineffective investment.

State budget sums should be earmarked for research in fundamental sciences in a way that organizations and individuals would be held accountable for the use of such funds.

It’s also desirable that the state should promulgate policies to gather and encourage the leading scientific intelligentsia, and create auspicious conditions so that they can make a decent living through their profession and contribute wholeheartedly to the cause.

Secondly, steps should be taken to build a robust scientific research system and a relatively stable research environment.

Efforts should also be made to reshuffle centers, research institutes and higher education institutions to allow the establishment of modern research centers. If this issue fails to be resolved drastically, a favorable research environment would be out of the question.

It’s urgent that priorities be identified, and leading scientists, such as Professor Ngo Bao Chau in math and Professor Dam Thanh Son in physics, be assembled and harnessed.

Also needed are programs to look out for scientific talents, including budding young ones and those having inventions which are of huge significance.

Due attention should also be paid to universities’ training quality, particularly in fundamental science research, as the schools serve as an incubator for the country’s scientific human resources.

Fourthly, investment in scientific research should be enhanced. Such countries as the U.S., Germany and Japan, which have won several Nobel Prizes, have poured whopping sums into science for a long time.

That does not mean generous funding would guarantee Nobel wins, but with effective investment, we have the right to pin our hope on a brighter prospect for the country’s science.

Among the state’s investment policies, investment in human resources is the most decisive. Constructing a research institute or modernizing the infrastructure are tough, but the tasks would be feasible in a short period of time thanks to the investment policies and loan mobilization.

However, building a closely knit community of topnotch scientists is a demanding and long-standing issue, which requires worthy investment and persistence.

I believe that if these conditions are realized, Vietnamese scientists would gain unexpected wondrous accomplishments in a future not far away.