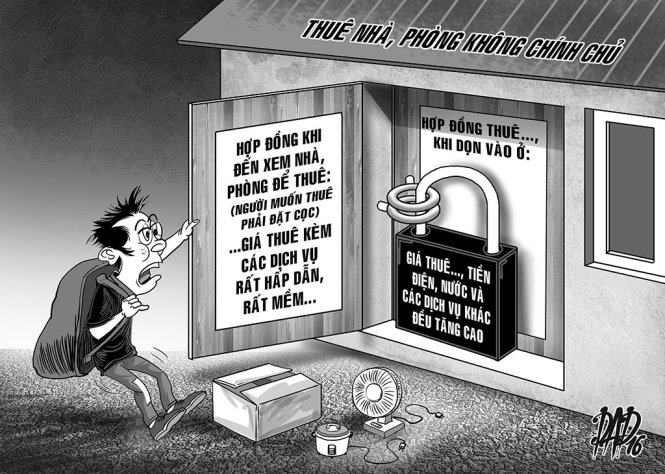 Home for rent in Vietnam: Whose house is it anyway?

Among life’s little joys is when you have your first tiff with your landlord. It’s a rite of passage. Learning to stand up for yourself and your rights in Vietnam is truly an education.

Get a group of expats together and the conversation will, at some point, turn to housing and landlords. It’s described as something between being squeezed through a sugar-juice machine and trying to wiggle your way out of an executive order from you-know-who.

Your lovely abode with its cozy, snazzy features soon becomes that marvelous hospitalizing dampness in the winter and pizza baking temperature come summer.

The fixtures packaged as made in America but really made in China rust fast, the wood begins to warp and electrical work is possessed by an evil genie. Time to call the great landlord!

Finding a good place and landlord has become easier in recent years around my central Vietnamese area as foreigner-operated real estate brokers are bridging the frustrating negotiation pitfalls that await starry-eyed new arrivals with that all too trusting look on their innocent gobs. However...

Coming from the more reasonable and legally enforceable rules of renting in our countries, what you deal with here can be mind-boggling. I was once asked for a year’s rent in advance with no refundable deposit for a two-story house in a less respectable part of Hoi An. I laughed and walked out.

‘Let the buyer beware’ isn’t just a warning, it’s a test of intelligence, you know.

Although in the main, Vietnamese landlords are OK, first impressions are sometimes deceiving. Contracts are occasionally full of alternative facts, your idea of urgent doesn’t fit Vietnamese ‘rubber time’, damage occurring while you were in hospital is suddenly your fault and the landlord insists there’s nothing wrong with that light hanging by a thread in your bathroom.

Frantic Facebook posts from renters asking for urgent advice about getting deposits back are becoming more prevalent along with the ‘name and shame’ tactics of some desperate tenants getting infuriated by the stalling landlords. I personally don’t agree with shaming people – you DO have to learn to get along with Vietnamese ways of doing things. There are quieter ways of dealing with problems.

Western notions of kicking up a stink don’t work on landlords too engrossed in their iPhone 7 texts while muttering that they can’t afford it. Threats only lead to eviction or more often, the subtle revenge of delaying fixing your hot water by an extra three days. So how do you deal with domestic non-bliss?

Vietnam is generally about relationships and tit-for-tat favors although the landlord is never going to invite you over for afternoon tea. Having a good Vietnamese friend who understands what you want and has the necessary tact to state, “My foreigner friend feels that there might be something wrong with the kitchen tap, could you take a peek at it and give us your expert opinion?”, is essential.

Some expats also recommend writing a translated letter which takes confrontation and emotions out of the issue, leaving the landlord to think about things in a calmer manner.

My landlord has been pretty reasonable for many years until recently when storm damage from last year suddenly became my financial responsibility and we had a lovely shouting match in my garden. One should never tell their landlord that if “I’m paying for rent and repairs then the house belongs to me – fair enough, hey?”

Yet we’ve found ways to compromise – I’ve started the cheaper wear and tear repairs at my own expense and he’ll finally get around to the bigger stuff – probably just before the house threatens to collapse! What’s with this ‘leave everything until the last minute’ mentality?

It’s a game of cat and mouse when it comes to who pays. It usually starts with the denial that anything is that serious. Not surprising in this ‘suild it yourself’ society where building standards are just a guideline to most builders. As I explained to a builder recently, “You built it as cheaply as you could and now you’re surprised it’s falling apart?” He was outraged. I laughed and left.

In most Western countries, there’s a legally enforceable set of codes or laws governing how landlords and tenants deal with problems, repairs and deposits or rent owed.

This is relevant as it’s only a matter of time before foreigners will be able to buy houses anywhere in the country as a means of boosting the property market instead of just apartments in selected areas.

As Vietnam grapples with the problem of getting foreigners to buy properties and invest in the country, it would do well to copy or adopt a stronger system of protection, the codes I mentioned above, for both parties to housing contracts. A written and agreed-to list of faults in the house before renting, for example, would be a good idea.

The problem looks only set to get worse as more housing comes on the market too. But on the bright side, someone’s building something more spectacular. Now where can I find a place with a Jacuzzi, swimming pool, outdoor bar and an air-conditioned dog house?