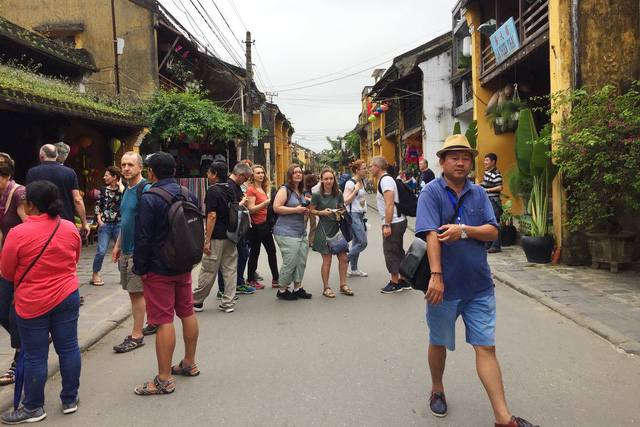 More on the whining expats in Vietnam

Editor's note: Tuoi Tre News welcomes responses to this opinionated piece, which does not necessarily reflect our point of view. Send your response articles to ttn@tuoitre.com.vn.

A few months ago, I wrote an article about the large number of unhappy expats here in Vietnam entitled “The whining expats in Vietnam.”

Generally I’m extremely upbeat, but several events conspired to put me in the right gnarly mood to vent my frustrations at that time. It began with the usual Social Media Whiners (SMW) who kill time in Internet groups bitching about everything.

One earth-shattering update was from a Whiner reporting that an oncoming driver had made a left turn at the last second directly in front of him without signaling his intention, causing the Whiner and his motorbike to topple over.

Another Whiner was swindled by a sugar cane vendor for VND2,000, or nine U.S. cents. The price is VND7,000 but he was charged VND9,000, ostensibly for being a foreigner, or maybe the vendor identified him as a Whiner and added a Whining Surcharge.

How the two find the courage to go on living after such injustices I do not know.

Then there was an English teacher with a major superiority complex who tore into one of the country’s deceased war heroes. I don’t care which war it was – it’s simple: we foreigners must not insult our host country’s famous historical figures.

The crowning blow was some clown complaining about a cockroach he found in a restaurant where he paid two bucks for something that would have cost five times that in his home country. Come on buddy – either suck it up, take a container of SUMO with you to disinfect your table before eating, or go somewhere fancy.

I got lots of feedback on that article – a Vietnamese language version was spawned so both locals and foreigners could read. Virtually all the feedback I received from locals was supportive. It was as if they’d been waiting to see their side of the story – even better that it was written by a foreigner so locals were not forced to deliver the news themselves.

The overwhelming majority of the feedback from foreigners was positive. Turned out there are lots of us “glass half full” expats here in Vietnam, mostly crusty old veterans who’ve been around a lot and can “roll with the odd punch” as the saying goes.

Then there were the SMWs who cursed, swore, issued threats, accused me of ass-kissing (for what possible gain I do not know), and made absolute idiots of themselves, which is what they do most of the time anyway.

The Whiners proved my points because not one disputed a single fact presented in the article, instead they were lightning quick to lob a hand grenade over the fence then rush to find shelter behind their keyboards.

Many fresh expats in Vietnam have little or no overseas living experience. Before arriving, many actually believe the locals will give them five or ten times the average local salary to teach English, feed them well for a couple of bucks, rent them lovely accommodation for next to nothing right near a pristine beach, and toss in a sweet girlfriend and a cheap motorbike.

All of the above happening in a backdrop similar to Singapore – quiet, clean, orderly, and predictable, where everything functions perfectly and all goes quiet at 10:00 pm.

They really believe it, or, better said, in the absence of having done any serious homework prior to arriving, they presume the above scenario will be reality.

We know they have those expectations because when conditions aren’t what they wish they moan and groan instead of being grateful for all the good things.

The litmus test, as always with expats, is not how many complain about conditions. The proof is the number who actually leave for another destination, and every month there are more expats coming to Vietnam than leaving. A lot more.

These SMWs have their favourite topics and beat them to death on a daily basis.

Road danger in Vietnam is number one on the list, and it’s true there is a serious issue just as it’s true in most countries in Southeast Asia. That tired old horse gets ridden around and around endlessly without any comparison made.

Thailand has 50% more road deaths per 100,000 inhabitants than does Vietnam. Malaysia has the same rate of road deaths as Vietnam despite having much better roads and safer roads featuring a lot more cars than motorbikes.

Surprised to see those facts?

Every day we hear about how the locals don’t dispose of garbage properly nor spend much effort on recycling. Yes, it’s true, Vietnamese people often throw trash every which way, but it’s not true that Vietnam is the dirtiest country around – it’s not even close to the top of the list.

Cambodia is so mired in anarchy that residents in some areas must hire private resources to take away their household garbage because the garbage collectors don’t collect. I’ve seen the sub-contractors do it, rats scattering as the garbage is filtered, it’s pretty disgusting.

The Governor of Bali (Indonesia) declared a state of emergency a couple months ago because the garbage on the beach became unmanageable. The garbage multiplied faster than anyone could clean it up and the authorities are still wringing their hands over the issue with no solution in sight.

Recently, authorities closed famed Boracay Island in the Philippines and a large section of the Phi Phi Islands in Thailand to visitors because they’re filthy beyond belief. It will take at least six months to clean up each place.

So by Southeast Asian standards, Vietnam is a poster child for waste management compared to its neighbours.

But what sent me scurrying to my laptop was a lengthy rant by an SMW on the topic of airport taxi scams, the silliest example of Whining trivia I’ve seen in a while.

Are there a good number of taxi scams at airports in Vietnam? Hell yes!

Are there any more scams at Vietnamese airports than others in the region? Hell no!

If I was to implement a “Scam-o-meter” covering the regional airports, Manila’s Ninoy Aquino International Airport would take first place uncontested. Arriving there feels like jumping into a tank of piranhas or a scene from the old Mad Max movies with vultures circling overhead.

Second would be Jakarta airport where all the drivers wear white shirts, dark ties and drive new cars but, incredibly, not one taxi has a functioning meter, or so they claim. Third place would be Bangkok, and Tan Son Nhat in Ho Chi Minh City would come in fourth or even fifth.

So we’ve crushed a few more myths here about Vietnam already without even working up a sweat.

Who are the Whiners and how did they end up in Vietnam?

We can eliminate the professionals, relocatees, business owners, and other executives right off the bat. They were sent here on assignment by the companies they work for or made an investment to start a business. Here to do specific business for a limited duration, they are a well-off and happy bunch moving in high circles with big wallets.

Also out of scope here are retirees – financially stable, enjoying a relaxed pace of life. They can afford to live at a reasonable standard of comfort and don’t have to shop around the local market for a cheap coconut.

Next up are the people who came to Vietnam to pursue a love interest. These types want to escape the doldrums and high prices in their home countries, are often at a fork in the road with their careers, so they find a partner half their age and doubly attractive, and let fly for Vietnam.

They are usually middle-aged, have a few bucks along with vague plans to open a business if things work out going forward.

Some of these relationships work and some are doomed because living cheaply and chilling with someone half your age only go so far before the younger half gets bored and the older half a lighter wallet. It reminds me of the old axiom: “A man falls in love with a dimple but makes the mistake of marrying the whole girl.”

A large percentage of expats are the younger types armed with accredited teaching certifications. They network with buddies, hear about the decent salaries and conditions in Vietnam, and set sail.

When they arrive in Vietnam they realize lots of others have the same idea so the only really good opportunities are in the largest cities where the cost of living is sky high for the salary they receive.

They’re stuck on the treadmill, living in a pricey shoebox and fighting traffic, maybe saving a bit but nowhere near what they’d envisaged. Returning home is an option, and most eventually do, but it’s worse than living abroad, which is why they left in the first place.

Would-be expats should do their homework and do it well, prepare for the good, the bad, and a few surprises. That includes choosing battles wisely over illegal turns and sugar cane juices overpriced by VND2,000.

They’d be wise to be careful about what they wish for because they’ll probably get it, but may not like the emotional and financial costs that come with it.

Locals, try to forgive the Whiners “for they know not what they do” even though they have nobody to blame but themselves for not having a positive experience.

When you meet such Whiners, think of the anecdotes I’m sharing here today and try to imagine which ones fit which Whiner – it’s a fun little game to play, and it will help you understand how they could be unhappy living in such a great place.

The truth is they’d be unhappy just about anywhere.