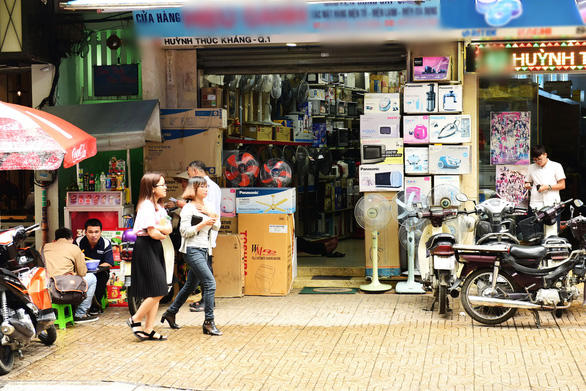 Technology and the expats in Vietnam

Vietnam is pretty cool for technology, the Internet, phones and computers these days. Actually, I think Vietnam puts Australia (my home turf) to shame as Aussies struggle to get decently priced Internet and phone deals with wide coverage and good download speeds.

Twelve years back when I first arrived in Hoi An, the cheap power adaptors for laptops to covert a foreign pin plug to the local two-pin sockets were everywhere. But they rarely lasted more than one or two months. No biggie, at 40,000 dong, I started my habit of buying two of everything. If one broke, I’d keep going with the other.

Of course, it didn’t help that I owned an ancient Nokia flip-phone. Finding a replacement battery meant local phone shop staff staring at me as if I was a caveman. However, with a million shops selling every kind of spare part – even going back years – the staff would whiz down the road and return ten minutes later with a dusty old battery, leaving me to guard the shop for a while. I wasn’t interested in stealing the Hello Kitty phone covers anyway.

Nowadays almost every street corner has a phone/computer shop with air-conditioning and all the goodies. Yet, I could still get caught out. I upgraded the phone to a Samsung Galaxy J3, rather swish I thought as I practiced using my fingers across the screen, like Vietnamese children do these days in coffee shops. Turns out that my phone was already obsolete so getting a new battery and replacing my scratched screen was almost impossible. I still have the heavy phone as it’s good for whacking people who talk too loudly near me in cafés.

When I was teaching in Da Nang, my students would laugh at my phone as they showed off the latest eight-hundred-dollar phone. That’s when I started increasing the school fees…

Of the eight billion most annoying questions on expat Facebook pages would be, ‘Where can I find a good laptop repair shop?’ Apparently not such a silly question; I’ve used up three laptops, probably more than a dozen mouses, more than three voltage adaptors and Power extension cords. One cord caught fire ten minutes after I bought the damn thing. Well, the answers my friend are not blowing in the wind nor while you’re sitting at the desk. Exploring is the name of the game and the only real way to check what people have in stock.

Dealing with local laptop repair shops in Hoi An nearly a decade ago was an exercise in insanity. One shop fixed a software glitch by installing Windows, wiping out my files, without telling me. Nice one, guys; fortunately, they went out of business.

It was a while before I found out that Phi Long, a major computer shop, was open in Da Nang. As recently as last week and part of this story was getting my latest laptop repaired at Phi Long. The problem? The local repair shop had put a Dell keyboard into my Lenovo.

Still I did marvel at the efficiency of the Phi Long service department, divided into hardware sections, service desks and a small café while you’re waiting. Better than having a smoke in the heat of the laptop sweatshops.

The most common problem seems to be replacing smartphone screens. Not doable for my pre-climate change phone. I gave up on that, believing that one look at my battered phone would deter most phone thieves. At least for the last four years that’s worked!

Wi-Fi and video for English teachers working secretly from home, teaching rich kids in China are a funny business. Howling on Facebook at 10:00 pm doesn’t help. You’d think they’d shop around a bit more, pay a bit more and get massive broadband/fiber speeds. Also, how can they be surprised by power cuts, cable sharks and mysteriously slow speeds late at night? To me that’s perfectly normal and part of growing up in Vietnam.

Mind you, the whims of some foreigners are stranger than anything the locals do. Stuff like buying one drink and sitting for hours using the café’s free Wi-Fi.  The best one to me is to watch backpackers argue with each other about who goes first to recharge their phones when there are only two power sockets but three users desperate to continue that conversation with their buddies back home.

The one part I really hate – folks who do video calls while I’m in the background eating. And honestly, I don’t care that Jerry hates Liza and you bought five T-shirts in the old town – keep it to yourself and do this at home, will ya?

Blogging seems the strangest thing to me – sitting in a café or working hub for hours on end when the weather is prefect for going to the beach. Even with five of these people huddled in a soundproof room – no-one is talking to each other. For people trying to communicate with others online, you’d think they try that in real life or…maybe they all have secrets? Hmm. And it’s going to get better – Vietnam is aiming to be amongst the countries to introduce 5G services in Southeast Asia. Great…more things that can go wrong! Just kidding!

No matter what, you’ll always get a great story out of using technology in Vietnam. I guess the secret to it all is to smile like you know what’s going on, lower your expectations, shop around instead of taking the first answer you get on Facebook and above all, remember the gadgets are only as good as the people using them!

And remember to plug the darn things in before you go to sleep!