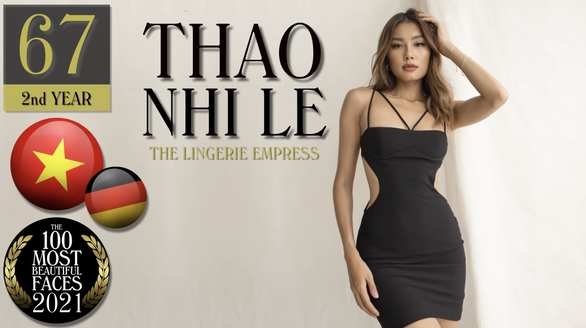 TC Candler and its collective of beauty critics, known as ‘The Independent Critics,’ on Tuesday named Vietnamese model Thao Nhi Le, 27, as number 67 on their list of the '100 Most Beautiful Faces of the Year.'

This is Le’s second consecutive year on the list and it is a 14-notch jump from her 81st position in the 2020 ranking.

Though both her parents are Vietnamese, Le was born in Germany where she eventually chose to pursue her passion for international retail fashion studies at Reutlingen University.

After graduating in 2018, she moved to Vietnam where she has since carved out an illustrious modelling career for herself.

Her modeling success has helped her build an Instagram following of over 550,000.

Her résumé also includes an entry into Vietnam’s Miss Universe beauty pageant this past September, during which she sparked criticism for being shorter and older than the other contestants.

She also garnered attention for appearing in the popular TV show 'Nguoi Ay La Ai' (Who is Single Vietnam).

“I put constant effort into both building the best version of myself and bringing value to the community, especially to Vietnamese women and younger generations,” Le shared while discussing her return to Vietnam.

Lisa Manoban from the K-pop group Blackpink topped 2021’s list after embarking on a fruitful solo career over the past year.

Her September single ‘Lalisa’ claimed the YouTube record for the most-viewed music video in 24 hours.

According to the the Independent Critics’ website, the celebratory ranking was created to cherish the feminine esthetic and open the world’s eyes to a unique, diverse, and international collection of beautiful faces.

Check out some photos of Thao Nhi Le below:

After the opening ceremony, local people have the opportunity to read books in the large and comfortable space of Van Mieu Park

Half of Vietnamese populace to adopt online shopping by 2025: master plan