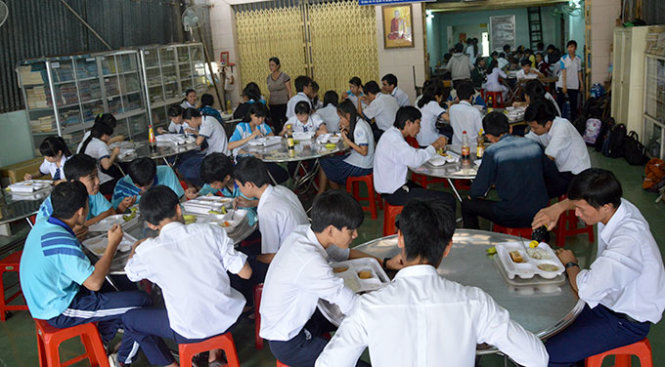 A number of teachers in southern Vietnam have run a kitchen where they cook and serve free meals to disadvantaged students for the last five years.

It was 6:00 in the morning one weekday in Dong Thap Province’s Sa Dec City when 14 members of the local Former Teacher Association were busy preparing lunches for poor students in the locality.

Every day, hundreds of meals are cooked by the teachers in the kitchen located on Nguyen Sinh Sac Street before being served to needy students who have registered to be “members” of the place.

Nguyen Van Mot, chairman of the association, said that the group founded the kitchen since they could not stand seeing underprivileged students eating nutrient-poor but cheap food like raw instant noodles, bread and sticky rice before classes.

After receiving support from numerous teachers, Mot and other members of the association started mobilizing food for the kitchen.

Local schools then sent lists of poor students to register for free meals.

Since it was established, the kitchen has served more than 200 students from local middle and high schools with a menu that changes every day.

“We’ve run this kitchen with the hope that it will last forever,” Le Thi Xuan Thu, vice head of the executive board of the kitchen, said. “That’s the wish of all teachers as well as donors who have helped keep the kitchen in operation in order to support disadvantaged students on their way to school.”

“Though we get tired sometimes, seeing students enjoy the meals and not have to go to school on an empty stomach cheers us up,” she added.

Le Thi Xuan Thu (L), vice head of the executive board of the kitchen, talks to a student after a meal. Photo: Tuoi Tre

Like many other students, Luong Thi Tuyet Phuong, a 7th grader from Vo Thi Sau High School, considers the kitchen her second family.

“The teachers have taken care of me very devotedly,” Phuong said.

Cam Em, a teacher who knows Phuong’s living conditions, said the girl has always strived not to give up on her studying despite her difficult circumstances.

“I have good meals thanks to this kitchen,” Vo Hoang Vu, another student, excitedly said while showing an extra meal the teachers gave him to bring back home.

Not only do they provide meals, the people behind the kitchen also runs a bookshelf so that students can have books to read there or borrow and take home.

Moreover, the association has also granted more than 800 sets of textbooks, 1,600 notebooks, and 1,200 pens to local disadvantaged students.

“Through the kitchen and the bookshelf, we hope their future will be brighter,” Mot said.

The kitchen receives donations in the form of money and food from local residents every day to continue its operations.