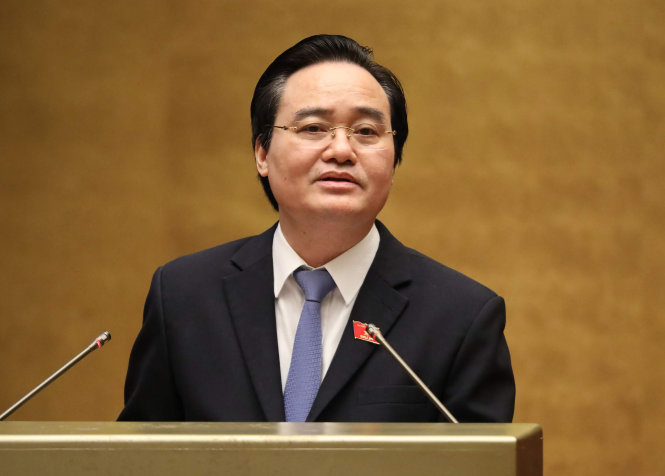 Vietnamese Minister of Education and Training Phung Xuan Nha has accepted responsibility for a recent scandal where officials in at least two provinces were found to have abused their power and duty to manipulate candidates’ scores in the 2018 National High School Exam.

“In light of recent violations in some localities, I take responsibility as minister,” he told cabinet members during a regular government meeting in Hanoi on Wednesday.

Nha acknowledged that there were “loopholes” in security measures concerning the marking process that allowed human interference to meddle with exam results.

Ministerial inspectors tasked with overseeing the exam’s organization in cities and provinces had not satisfactorily performed their duty, he added.

Nha considered the test-score manipulation scandals uncovered in mid-July in the northern provinces of Ha Giang and Son La to be of “very serious” nature.

The education minister said he had been keeping the prime minister updated on the developments of the scandala and worked closely with investigators from the Ministry of Public Security to bring the issue to light in the spirit of strictly penalizing violators in accordance with the law.

He noted, however, that “results of the entire national exam must not be undermined or discredited solely because of some violations."

“We will continue to work toward perfecting the exam’s organization for the upcoming years,” Nha said.

Nha’s statement came three weeks after the unprecedented scandal, which hit Vietnam’s most important exam for high school students, first unfolded on July 17 with the revelation that the scores on 330 test papers in Ha Giang had been digitally tampered with by a local education official.

Results of the National High School Examination, held every year around June, are used to determine whether a student qualifies for graduation from high school and act as a placement test for college and university entrance.

This year, nearly one million candidates took part in the exam from June 25 to 27, where they sat for tests in math, literature, foreign languages, physics, chemistry, biology, history, geography, and civics.

Test scores in Son La were later found to have also been meddled with, in yet a more serious manner, with investigators concluding that candidates’ answer sheets might have been edited before they were scanned for scoring and archiving.

That original answer sheets had been edited before scanning means there are no other available data to lean on when re-assessing exam results.

Legal proceedings have been launched against seven officials from both provinces, five of whom placed under arrest and the other two barred from leaving their respective place of residence, for roles in the score manipulation.

Apart from Ha Giang and Son La, at least eight other provinces and cities across Vietnam have launched inspections into their exam results following a directive from the ministry.

As the nation awaits the ministry’s final decision on the fate of candidates affected by the scandal, it is still unclear how universities and colleges in Vietnam will go on with their admission process.

“The ministry’s decision will have to be based on police investigation results and one that is fair for all,” said Nguyen Huu Do, Deputy Minister of Education and Training.