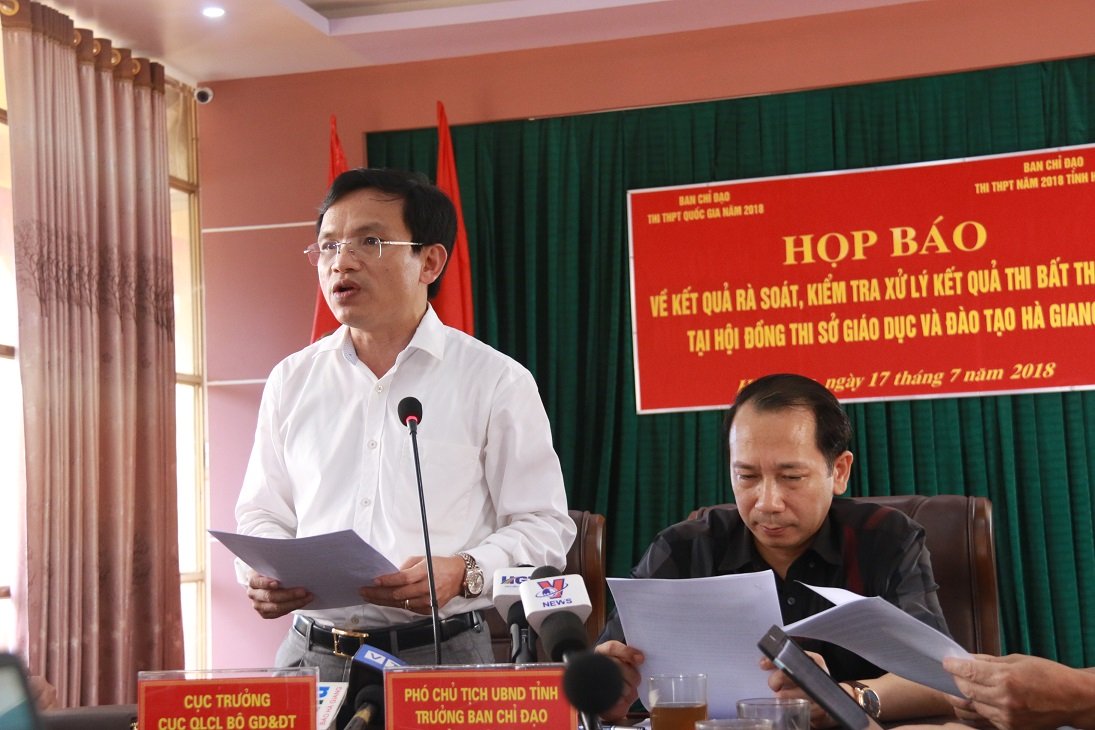 Vietnam’s most important national exam for high school students has been marred by an unprecedented scandal after the scores on 330 test papers were found to have been digitally tampered with by an education official.

Results of the National High School Examination, held every year around June, are used to determine whether a student qualifies for graduation from high school and acts as a placement test for college and university entrance.

This year, nearly one million candidates took part in the three-day exam from June 25 to 27, where they sat for tests in math, literature, foreign languages, physics, chemistry, biology, history, geography, and civics.

Ha Giang accounts for nearly half the total number of candidates achieving a score of 27 out of 30 or higher nationwide for the subject combination of math, physics, and English, whose tests were all in a multiple-choice format.

The overwhelmingly positive results reported by Ha Giang were made even more suspicious by the fact that the province is consistently ranked among the poorest-performing locality when it comes to education.

Less than 90 percent of senior students in Ha Giang qualified for graduation this year, the second-lowest percentage nationwide.

Inspectors from Vietnam’s education ministry were on Saturday dispatched to Ha Giang to investigate the peculiar incident.

The delegation reportedly had 5,500 exam papers in the province re-marked and discovered that the scores on 330 of them, belonging to 114 candidates, had been tampered with.

Scores were raised by up to 8.75 points out of ten for each test paper, making some students who would otherwise have been disqualified for graduation become a top scorer in the national exam, officials said at a press briefing on Tuesday afternoon.

For instance, one test-taker had their chemistry score raised from 0.75 to 9.5 out of ten, while another had their math score increased by eight points, from 1.0 to 9.0 out of ten.

In one special case, a candidate had the combined score of math, physics and English elevated by 20.05 points compared to actual results, from only 7.95 to 28 points out of 30.

Further investigation, with assistance from the Ministry of Public Security, found that Vu Trong Luong, deputy head of the testing and quality assurance division under Ha Giang’s Department of Education and Training, had been directly involved in the score manipulation.

Luong reportedly took advantage of his responsibility as the operator of a computer storing exam results to meddle with the students’ test scores.

With access to the original answer sheets, he also altered the candidates’ answers to cover up his actions, inspectors found.

Hundreds of text messages were found on Luong’s cellphone containing the candidate IDs of those whose exam results he was asked to adjust.

It reportedly took Luong only six seconds to adjust exam results for each candidate.

It remains unknown what motivated Luong to conduct the test-score manipulation, and whether he acted on his own or with the help of others.

According to Mai Van Trinh, head of quality assurance under the Ministry of Education and Training, all of the 330 affected test papers will have their scores re-adjusted as police officers have been asked to launch a full-scale investigation into the scandal.

The team surpassed 22 competitors at the UNWTO Students’ League competition