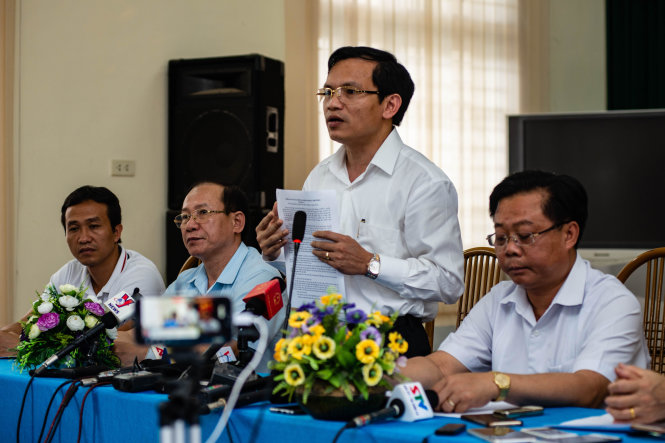 Vietnamese inspectors on Monday announced a shocking finding that candidates’ answer sheets in the 2018 National High School Examination in a northern province might have been edited before they were scanned for scoring and archiving, making it nearly impossible to trace back the original answers.

The finding was reached after a joint team of education ministry officials and police officers launched a full-scale inspection into score manipulation suspicions in Son La Province last weekend.

A drove of multiple-choice answer sheets showed signs of having been altered to increase their scores, posing inspectors with a challenge in re-marking the papers thanks to the lack of evidence of the candidates’ original answers for comparison, inspectors said on Monday.

A similar inspection was conducted in the neighboring Ha Giang Province earlier this month, after suspicions were raised on unusually high scores achieved by local candidates in the same national examination.

Inspectors were able to prove the results of more than 110 candidates in Ha Giang had been manipulated, thanks to original exam data kept by the Ministry of Education and Training.

However, in the case of Son La, data stored by the ministry are scanned copies of the already-edited answer sheets, effectively exhausting inspectors of their last fallback option.

With the exception of literature, all test papers for other subjects in Vietnam’s national high school exam this year, held from June 25 to 27, were in a multiple-choice format.

Candidates marked their choices with a pencil on a separate answer sheet, which were scanned into computer image files and scored digitally using a software.

Copies of the image files were also sent to the ministry for archiving.

The fact that original answer sheets had been edited before scanning means there are no other available data to lean on when re-assessing exam results.

Announcing their initial findings on Monday, inspectors said it was not yet possible to confirm the total number of edited answer sheets in Son La or the manner in which they had been altered.

However, sources familiar with the investigation told Tuoi Tre (Youth) newspaper that police officers in Son La had questioned suspects who reportedly confessed to having edited the answer sheets before the scanning procedure.

The suspects are local education officials who were directly involved in the scoring and protecting the answer sheets.

As for the literature test, inspectors said 12 candidates in Son La had their score lowered by 1-4.5 points out of ten after re-marking, while the scores of 17 other candidates were found to have been input wrongly into the computer.

Hoang Tien Duc, director of the provincial Department of Education and Training, was absent from the press briefing for “special reasons”.

Apart from Ha Giang and Son La, at least eight other provinces and cities across Vietnam have launched inspection into their exam results following a directive from the ministry.

On Monday, police in Ha Giang detained and launched legal proceedings against Nguyen Thanh Hoai, head of testing and quality assurance under the provincial education department, for “abusing power and duty” to manipulate exam results.

Hoai allegedly colluded with his deputy Vu Trong Luong, who was arrested last Friday for adjusting the scores on 330 test papers belonging to 114 candidates in less than one day while operating a computer that stored exam results.

Results of the National High School Examination, held every year around June, are used to determine whether a student qualifies for graduation from high school and acts as a placement test for college and university entrance.

This year, nearly one million candidates took part in the three-day exam, where they sat for tests in math, literature, foreign languages, physics, chemistry, biology, history, geography, and civics.

Education minister Phung Xuan Nha has yet to make a public statement on the issue since the scandal erupted in Ha Giang on July 17, as lawmakers call on him to take responsibility for what is now considered the biggest test-score scandal in Vietnam’s national education system.

“If this scandal had happened elsewhere, at least a handful of people would have stepped down from their office,” said Nguyen Thi Kim Thuy, a permanent member of the lawmaking National Assembly’s Social Affairs Committee.

“The minister seemed confident when he talked about education and exam reforms before the Assembly during a recent session. I wonder if he’s thinking about what he said now,” Thuy said.