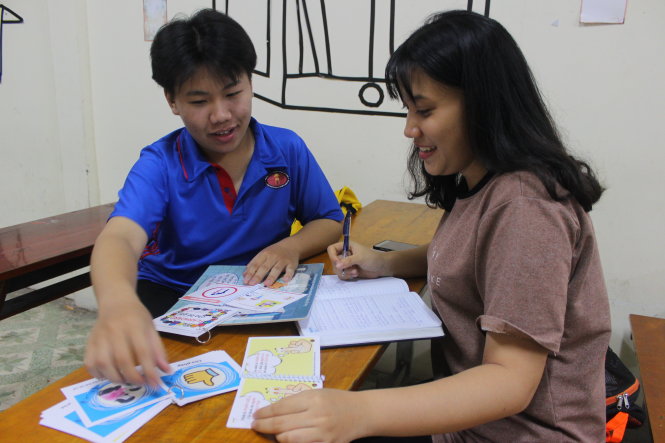 Two Vietnamese freshmen have made a group of products to equip children with knowledge of sexual abuse risk and help enable their self-protection in a country where formal anti-pedophilia schooling is still nascent.

Doan Anh Tram and Do Anh Tuan, students at the University of Social Sciences and Humanities, a famous school in Ho Chi Minh City, were so concerned about multiple child abuse scandals in their high-school time that they decided to design products in a homespun effort to preempt the issue to some extent.

The products consist of a website (https://bacsigaunau.wordpress.com/) with information on child abuse; a YouTube channel that has child-abuse prevention cartoons they made using Microsoft PowerPoint; a handbook with detailed knowledge on child abuse; flashcards with skills to handle possible real-life child abuses; and jigsaw puzzles on molestation.

Images in them are considered appropriate to those 6-12 years old and able to captivate their attention.

Tram and Tuan said most children questioned in Ho Chi Minh City were ignorant of child abuse because parents in the Vietnamese cultural climate tend to avoid mentioning gender problems to their children.

The two students tried to discuss topics and design materials for the products in person although they were reviewing for a crucial college entrance examination in June.

One of them felt dispirited due to stressful revision on many occasions in carrying out the project, in which case the optimistic partner gave the other a word of encouragement.

“For young people, they should immediately do what they want to do. If hesitance creeps in, their enthusiasm will ebb away and their idea is very likely to be thrown away,” Tuan said.

He and Tram garnered child abuse information, conducted surveys at elementary schools in the southern metropolis before forming their approach to teaching children knowledge of molestation.

“Children love eye-catching pictures and have different cognitive characteristics at different developmental periods. That’s why a certain age bracket has its own education method,” Tuan said.

The students found from the surveys that a number of local elementary schools already have given children knowledge of sexual abuse, but the learners are very prone to forget it quickly.

Tuan and Tram’s products therefore serve to strengthen children’s memory of what has been absorbed about child abuse.

The freshmen also found that many child abusers were victims themselves and a good education for younger generations can be a step closer to eradicating the crime.