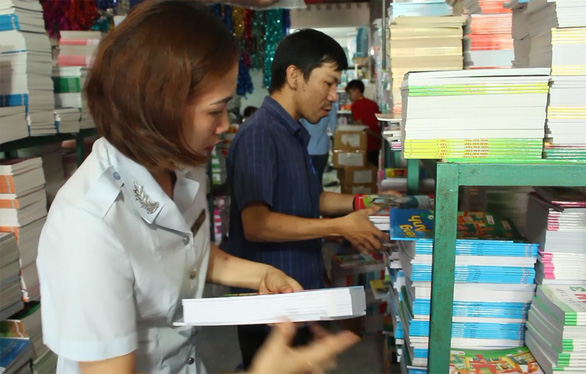 A multi-department inspection team has discovered a large number of fake textbooks at a bookstore in the south-central province of Binh Dinh, in the country’s largest pirated coursebook haul ever busted, officials said on Thursday.

Officials found 72,602 pirated versions of the official textbooks used in Vietnam’s K-12 system at the My Huyen Bookstore in Hoai Nhon District after the inspection on Wednesday.

In Vietnam, the authentic textbooks are published the Vietnam Education Publishing House, each of which is placed with an anti-counterfeiting stamp.

The inspectors said they decided to check the Binh Dinh bookstore as the stamps placed on textbooks on sale there showed signs of suspicion.

“The bookstore owner failed to provide relevant documents to prove the origins of the books as per requested,” one member of the inspection team said.

The pirated textbooks have been sealed and confiscated for investigation.

The bookstore’s owner, Le Van Hai, was summoned to work with the inspection team on Thursday, according to Tran Kim Kha, director of the provincial information department.

Hai admitted at the working session that he sourced the textbooks at cheap rates to sell at lower prices than market rates, just to help people to buy them at affordable prices.

“The textbooks have the exactly same contents as authentic ones published by the Vietnam Education Publishing House, except for their low paper quality,” Hai said in defending his 'good deed.'

Pham Thi Thu Huong, deputy director of the Vietnam Education Publishing House’s branch in the central city of Da Nang, said this was the biggest volume of pirated textbooks ever been discovered.