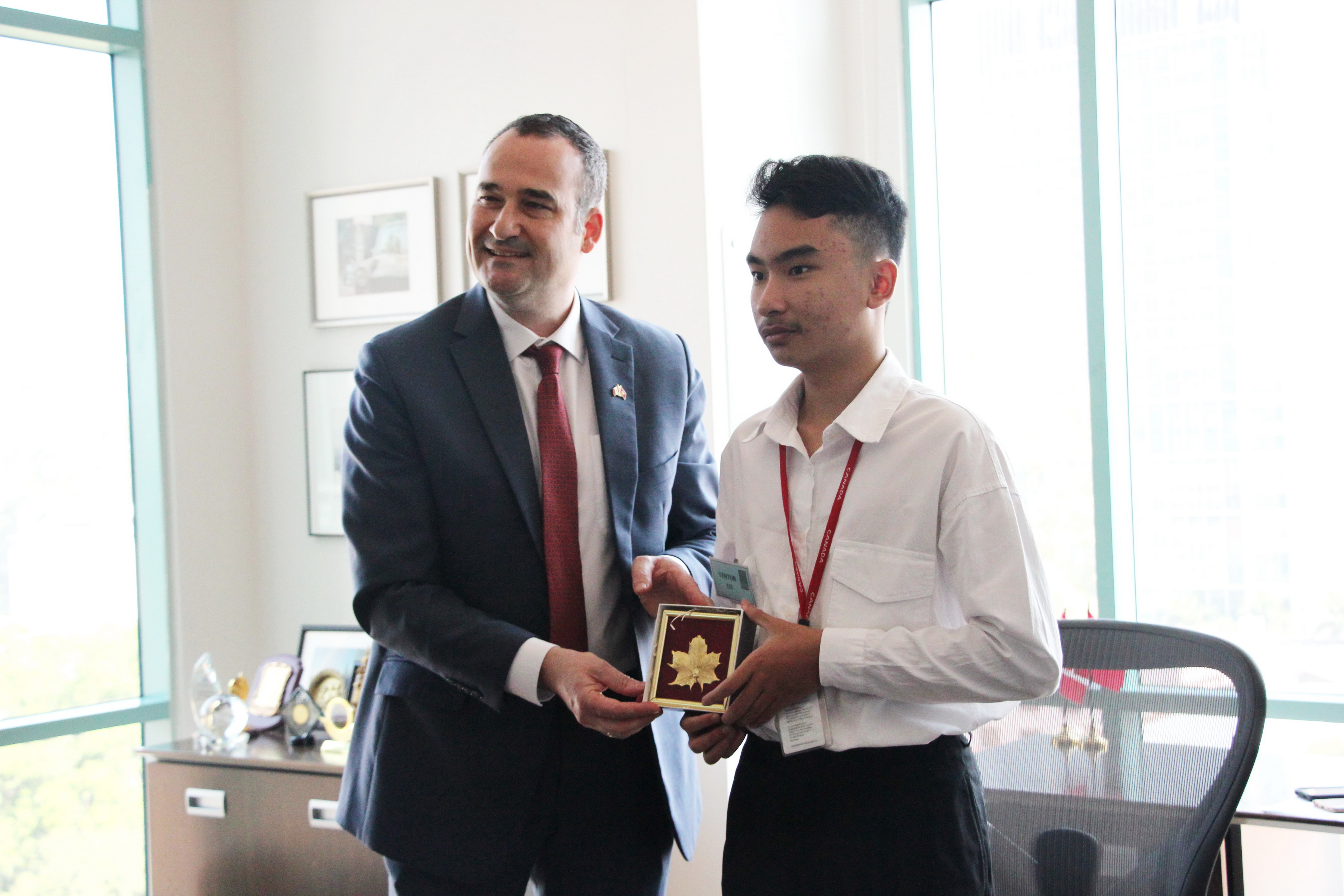 At a recent luncheon held in Ho Chi Minh City, a group of strong Vietnamese women leaders sat down with local high school students to discuss gender equality in Vietnam.

“Do I think I as a woman I need to fight very hard for gender equality?” Nguyen Phi Van, one of the leaders at the event, asked as the group discussed some of the barriers women in Vietnam face in the workplace.

Van serves as the chairwoman of the advisory board of the Saigon Innovation Hub, an initiative of the Ho Chi Minh City Department of Science and Technology.

Before anyone could respond, Van answered herself with a defiant “No.”

Van went on to explain herself.

“I think gender equality is more about telling girls that they don't have to think that they are less [than men] and need to fight for equality.

“It’s about telling them to be themselves in order to advance in the work they would like to do.”

The discussion was held in English and co-chaired by Canadian Consul General Kyle Nunas and Le Huy Tuan, a ninth grader who recently won the 'Consul General for a Day' competition organized by the Consulate General of Canada in Ho Chi Minh City.

Tuan was accompanied by three of the contest’s finalists, including one male and two females.

Tran Thi Ngoc Mai, one of the contest’s finalists, described the meeting as her "best experience ever."

Mai, a 12th grader who traveled from the southern province of Ba Ria – Vung Tau for the event, shared that she found the women leaders in attendance to be a major source of inspiration for her to break down barriers in order to pursue her dreams.

As a male, 'Consul General for a Day' Tuan had a different perspective on the event.

“I learned that everyone is equal and we should not say a woman is unable to earn a salary equal to that of a man," he said.

At the luncheon, the one-day consul general also treated his guests to Canadian delicacies including salmon, lobster, and maple syrup dessert while they mentioned a variety of topics aside from gender, including the Comprehensive and Progressive Agreement for Trans-Pacific Partnership (CPTPP).

This is the second year in a row the 'Consul General for a Day' event has focused on celebrating gender equality.

The competition, which targets Vietnamese students from grades 8 through 12, aims to engage young Vietnamese on issues related to women’s advancement, gender equality, and the empowerment of women and girls, according to the organizer.

To enter the competition, contestants were required to write an essay in either English or French addressing the specific actions he or she is committed to taking in order to promote the competition’s values.

In his essay, Tuan wrote that he has been “attempting for many education and social projects for students in the northern midland and mountainous areas and promoting, inspiring girls for education opportunities [sic].”

Tuan said he learned his most valuable moral lessons from his mother.

“With such great influences and impressions, I attached great importance to the role of women in our society, especially in this rapidly developing world [sic],” he wrote in his competing essay.

“My hometown is Long An, a province where Michelle Obama visited to give a speech on the importance of right to girls.

“Living in remote regions, I am able to witness the unfair culture and discharged bias with women and girls.

“Within my own ability, I have convinced many families to give their child an opportunity for education, to be equal [sic].”

Though not a member of the contest’s jury, Canadian Consul General Nunas told Tuoi Tre News that the quality of Tuan’s writing and his ability to clearly express the importance of gender equality were major factors in his success.

“He described how, in his own life, he's been committed to advancing gender equality,” the diplomat explained.

“I read his essay and understood how he worked in his home area to help educate girls and he described as well, I think in very modest ways, the small measures he does every day in his life to help the women and girls around him.

“All these things were exactly the types of characters that we were hoping would inspire other boys to follow."

One of the things about the competition that stood out most to Nunas was the increase in male contestants, as the percentage of boys participating in last year's edition was about 30 percent and that figure rose to almost 40 percent this year.

“We thought it was such an important thing to show boys and girls around the world, the importance of not only having conversations about gender equality with women and girls, but also with boys and men,” he shared.

The male finalists also agreed to join the consul general in committing to #HeforShe, a solidarity campaign initiated by the U.N. calling for men around the world to support gender equality.

“As a man I feel that it's important that we learn how better to work and help the women in our lives, whether they are our wives, our daughters, our friends or our colleagues, and learn how to better support them and give them the opportunities that we've been able to take for granted as men,” Nunas explained.

“I’m happy to see such young men care and have the opportunity to join such activity,” Ninh told Tuoi Tre News.

“To make it here, they had to research, look for information and learn about gender equality.

“They have developed their awareness on the issue at such young ages, so I believe in the future, they must have more opportunities to learn about the issue."

Below is the final paragraph of Tuan’s winning contest submission:

I am not a celebrity, a famous or an influential person. I am an ordinary student who happened to be able to reach high education environments. Therefore, holding a project and organize it on my own would be so ineffective for me, try to get to remote regions on my own or with a few friends is considered risky and not so impactful. That is the reason why I am not promising too much but what I can truly do and achieved.
The future's a mysterious world where we can never predict what will happen. Though, if it turns out I am a successful person, I would definitely put in progress anything within my ability to help promote gender equality and empower girls [sic].