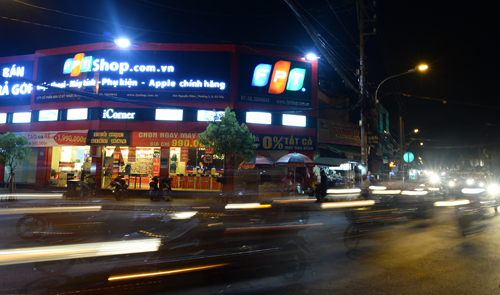 Electric light is not the light of civilization, a researcher has said.

This is because excessive light can cause myriad problems such as disease, sleep deprivation, traffic accidents, and other issues harmful to human health.

Damage caused by electric light has not been dealt with seriously, despite the fact that it has been identified by scientists as an ‘invisible killer,’ especially in major cities in Vietnam and throughout the world.

Victims of photo-pollution in Vietnam

The street running from Tham Luong Bridge to An Suong crossroads in District 12 in Ho Chi Minh City is a scene of many traffic accidents likely caused by light pollution.

In recalling their accidents, drivers remember suddenly entering an area of extreme light while driving down the road and being blinded by the bright light, causing them to fall to the ground.

Nguyen Tran Thanh An, a resident of District 12, says that when he drives on this road, he often feels stressed as he cannot see anything because of the glaring light.

Many people have said that they feel the same, he added.

Huynh Kim Tuoc, director of the Energy Conservation Center HCMC, confirmed that such symptoms are the results of light pollution because the road section was installed with a high-power street lighting system, resulting in excessive light.

The human eye cannot physically adjust to such light.

When you are going from an area of normal light to another area with excessive light, you fall into an ‘invisible blind spot,’ Tuoc explained.

Le Thi Hoai Nam, who resides on Nguyen Son Street in Tan Phu District, said her whole family has suffered from sleeplessness and loss of concentration due to light pollution.

Doctors confirmed that the light from advertising signs on streets near her house, especially colorful lights with short wave lengths, is the reason her family has been suffering from multiple diseases, she added.

“In the long term, light pollution can cause people to be annoyed or depressed, and possibly even cause breast and skin cancer,” said Doctor Phuong Loan of Saigon General Hospital.

Architect Pham Thanh Hung of a Japanese company in HCMC said Vietnam has ignored the standards of natural light in a house.

An expert in the outdoor advertisement industry said that an ad firm in Vietnam is ruled to have about 20 certificates for installing an outdoor ad panel, but none of them is for the management of light standards.

Ad firms are free to use bright or dim light as they wish, he added.

“Meanwhile, a foreign firm always pays attention to light standards before installing an outdoor ad panel to make sure it is fit for human eyes,” the expert said.

Dr. Che Dinh Ly, vice head of the Institute for Environment and Resources in Ho Chi Minh City, called on authorities to consider light pollution as one of the major problems that causes damage to a person’s health.

“We should research how animals grow when in an environment with excessive light.

“We should also issue regulations on using artificial light in farming.

“The abnormality may accumulate in our bodies and cause cancer and other rare diseases and symptoms,” he said.

According to the World Health Organization, unnecessary light is considered a kind of pollution, causing diverse symptoms and diseases in humans.