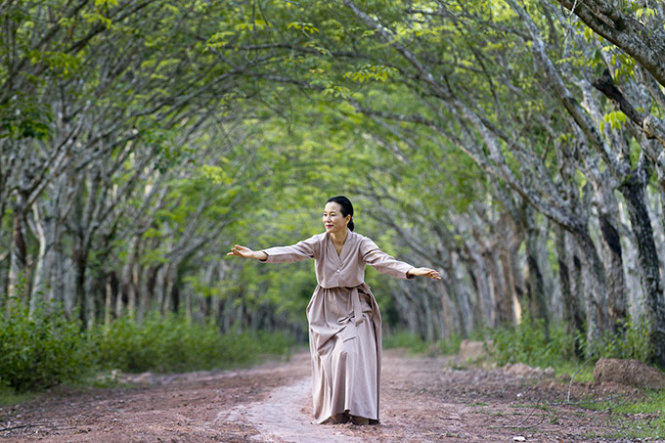 A South Korean choreographer, who has lived in Ho Chi Minh City for 10 years now, will mark the resumption of her life-long infatuation with dance in a traditional dance show to be held early next month.

Chun Yoo Oh, 53, will serve as the choreographer and main dancer of a traditional Korean dance show titled “Arirang Saigon,” which is scheduled to take place at 7:30 pm on December 1 at the Saigon Opera House.

The dances will be based on the East Asian country’s “Arirang” music.

“Arirang,” a hallmark UNESCO-recognized Korean folk song, boasts around 3,000 different versions in varied areas, all of which highlight the common thread of separation and waiting.

Choreographer Chun, who still possesses a smooth complexion and slender figure at such an age, said that her decision to resume dancing did not come easy, but she is positive she will be resolute.

Born near Masan Port west of Busan in southeastern South Korea, she fell head over heels in love with dancing when she turned 12.

“Dancing is my first and longest-standing lover,” she confided.

Upon graduation from Ewha Womans [sic] University in Korea, Chun went on to obtain a PhD in art at the University of Surrey in the U.K. after successfully defending her dissertation on motion in dancing.

Chun became a professor at Seowon University where she lectured and choreographed major shows for 14 years since 1991.

However, her world was turned upside down in 2004 when she suspended her dream job to move to Ho Chi Minh City and help with her in-laws’ business.

“I kept reminding myself I would soon resume dancing, but the hectic business activity just got me rolling and left me almost no time to indulge in my passion,” Chun said.

She habitually takes strolls along the Saigon River or in vast expanses of rubber forests far away from the city, and hangs around the Saigon Opera House or Ben Thanh Market – two of the city’s icons – for inspiration.

“I soon realized the city’s hustle and bustle have always offered me refreshing ideas as far as dancing is concerned. That’s why rubber forests and the Saigon River wharf have long been my favorite practice venues,” she said.

She even danced right in front of Ben Thanh Market in the city’s downtown area on the spur of the moment.

The authenticity and vividness of Vietnamese contemporary dance plays have helped revive her passion, she added.

“Old age began to take its toll on me three years ago, rendering me less acute and agile. I started ponder whether I should give up on all my passion and dreams for my family’s sake,” Chun added.

During a recent one-week stay at a hospital, she heard a tune which immediately prompted dance moves to flood in.

“It then dawned on me that when my soul is still moved by a tune, I can still resume my dream, though I’m no longer young,” the choreographer underscored.

In 2013, she marked her comeback with the role of a coordinator for a dance show, “Into the Time,” which showcased South Korea’s and Vietnam’s traditional music performances.

After nearly one year of relentless practice, Chun now feels confident enough to make a more striking comeback in the upcoming “Arirang Saigon” dance show, both as its choreographer and lead dancer.

The middle-aged artist is due to perform five of the show’s 11 dances.

She noted people generally add the name of their localities to the word “Arirang” to produce a new version of the folk song, which conveys their own emotions and messages.

Chun said her “Arirang Saigon” show will help her pass on her message of love and respect for the Asian women who are willing to make sacrifices and give up on their dreams and passion for their family’s sake.

The show is also an urge to spur the women on to pursue their desire to the end.