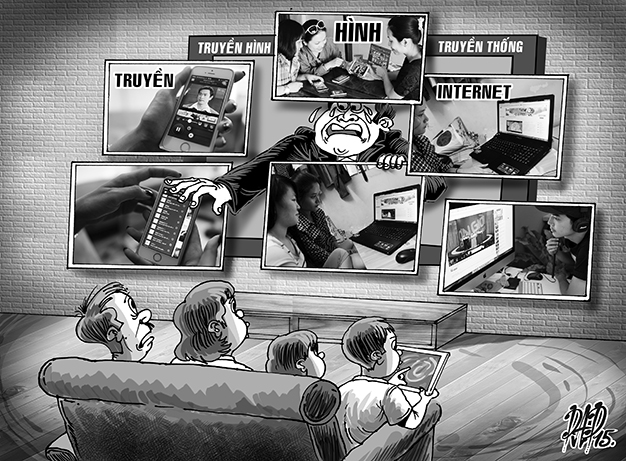 Many viewers, particularly those aged from 15 to 50, these days no longer eagerly await their favorite programs on TV.

The sight of families gathering around a TV set is almost a thing of the past.

A family of three or four can thus enjoy different programs to their own liking on different devices.

Fed up with watching TV?

Nguyen Thi Ha, 39, an office worker at Tan Tao Industrial Park in Ho Chi Minh City, said she has not watched TV over the past three years.

“I generally go out with my family and friends in the evening, and watch TV programs and films online only in my free time. Enjoying the programs on the Internet saves me considerable time and trouble waiting. Unlike TVs, where we have to switch channels or ‘suffer’ the rampant ads, I can easily turn off pop-up ads online,” she said.

Nam, a 70-year-old woman who resides in the city’s Tan Binh District, sometimes asks her children and grandchildren to turn on online Vietnamese films on their laptops.

She said by viewing films online, she can watch several episodes in one go, instead of waiting for single episodes to air on TV.

Video clips mushroom on YouTube and other entertainment channels only a few minutes after airing on TV.

The local version of an Australian improvised comedy titled “Thank God You're Here,” which is one of the most sought-after programs now, has consistently reached 3-4 million views per episode on YouTube.

A young man who works as a mobile phone deliverer chooses to watch his favorite TV programs on the computer, which fits his working schedule. Photo: Tuoi Tre

Conventional television stations are also losing a large segment of their ad revenue to online ads.

However, the ratio has changed notably, with at least 10-20 percent of the budget now being earmarked for online ads, including banners, tabs, and ads on Facebook and forums as well as holding contests on social networks to lure clients’ comments, likes and shares.

Television stations have inevitably suffered losses due to the media boom.

Phuong Thuy, chair of Dream Field Studio – a local company – said TV stations have suffered, particularly in revenue from commercials, as influxes of ads have been posted on new media websites.

Website and mobile ads fetch considerably lower prices than TV commercials and they can easily gain access to the right groups of potential clients.

Thuy stressed that in recent years, though TV stations have increasingly adopted the format of a wide array of foreign reality shows and other programs to diversify their content and draw viewers, their revenues have not seen a rise and even suffered a slight decrease.

A recent survey by Kantar Media Vietnam – a media and advertising research company – showed that last year, 26 percent of the urban population and 15 percent of the rural people aged from 15 to 54 watched TV content on their digital device.

The gaps between urban and rural areas have also been further bridged, as 87 percent of people in rural areas and 93 percent of city dwellers now use mobile phones.

The country’s rural population makes up 68 percent of the total, according to Kantar Media Vietnam.

The media research company also reported a stable annual rise of over 30 percent in the country’s advertising sector.

Several TV stations have launched their own programs on their YouTube channels or websites in a bid to cope with rampant pirates, who illegally screen the TV content online to gain profits.

The stations explained that streaming the programs, which are copyrighted, is a way to attract viewers and drive them away from sites that show them illegitimately.

However, it is only a temporary measure, as similar posts will soon pop up on other websites, she said.

In April 2014, Ho Chi Minh City Television (HTV) debuted their HTV Online website, where they upload all their aired content to win back viewers and attract online ads.

However, the earnings from online ads remain inconsiderable, its representative said.

Tran Binh Minh, general director of VTV, said in a late 2014 meeting that it is a priority that TV stations now diversify and enhance their content quality, which poses tremendous difficulty for provincial stations.

TV stations in several provinces have come up with approaches to cope.

Le Quang Nguyen, director of Vinh Long Television-Radio, noted their website is quite limited in terms of layouts and capacity, and remains unappealing to viewers.

They launched their own YouTube channel in November 2014 to draw more viewers.

Digital broadcaster VTC and VTV also created their own channels at youtube.com/vtctv and youtube.com/VTVgo in 2013 and 2014, respectively.

TV program producers also make sure their new programs are highly interactive and have layouts and quality that are compatible with all kinds of digital devices.

One of the interactive TV programs popular with young people is an entertainment show called “Bua Trua Vui Ve” (Happy Lunch) on VTV6.

While watching the program, viewers have the feeling that they are participating in it by helping guest players answer the show’s quizzes through their smartphones or computers, and take photos and post them on its fan page to win gifts.

The show producer encourages viewers to share their stories and news and even pay for newsworthy items.

“Tuoi Thanh Xuan” (Forever Young), a Korean-Vietnamese drama, which has aired on VTV3 since mid-December 2014, still has an undecided ending to encourage viewer contributions on its Facebook page.

“Tuoi Thanh Xuan,” which was filmed in both South Korea and Vietnam for six months, is also scheduled to be broadcast in the East Asian country, a number of Southeast Asian nations, and the U.S. via CJ’s M Channel.