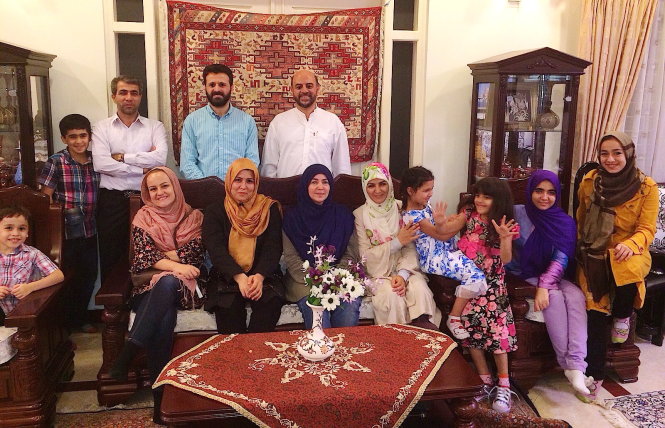 Al Noor, the only mosque in northern Vietnam, has been the rendezvous point for Muslims of different nationalities, particularly ambassadors to Vietnam, for over a century now.

Al Noor, secluded on Hang Luoc Street in Hoan Kiem District, Hanoi, was built in 1890 by Indian Muslims who originally went to Vietnam to do business.

Quite small at only 700m², Al Noor adopts the signature Islamic style of mosques that can be seen all over the world.

The mosque’s is painted entirely in white and features a plain and airy design, with large, lofty arched doors in the main praying hall. Adopting a western direction to face the Muslim holy city of Mecca, the edifice has undergone several historical upheavals, including war.

The mansion, however, has retained most of its architectural features.

This is where expat Muslims of different nationalities and Islam-practicing ambassadors to Vietnam go for weekly prayers.

Between 600 and 700 Muslims, including diplomats and entrepreneurs from around 20 countries, currently reside in the Vietnamese capital, he added.

Al Noor is capable of housing approximately 200 worshippers at one go, with its yard seating another 100. Ambassadors enjoy no privileges compared to average Muslims, which means early arrivals gain entry to the inside, while late birds make do with practicing their rituals outside.

During services, diplomats generally recite the Koran in Arabic.

Those who cannot speak Arabic can say their prayers in their own languages such as Indonesian, Malay, or English.

“Muslims in Hanoi generally gather in the largest numbers at Al Noor during the month of Ramadan, which falls in the sixth or seventh month of the lunar calendar,” Cuong, deputy head of the Al Noor Mosque management, said.

“The place is also a favorite hangout among members of the Muslim community,” he noted.

Cuong’s Pakistani father married a Vietnamese woman and settled down in Hanoi in 1940.

He revealed that former Iranian Ambassador to Vietnam Hussein Alvandi, who concluded his ambassadorship in the Southeast Asian country in September 2015, attended the wedding of Cuong’s grandson, which was conducted in observance of long-standing Muslim traditions right at Al Noor Mosque.

The Tuoi Tre reporters were also blessed with several meetings with the former Iranian ambassador during his tenure.

Contrary to the reporters’ visualization of a discreet, somber-looking diplomat from old-time Persia, former Ambassador Hussein struck them during their first meeting as an open-hearted, amicable man.

He confided in them on problems, even minor ones, which faced his family when they first arrived in Hanoi.

Such problems included the shortage of mosques and praying areas dedicated to Muslims in both Hanoi and Ho Chi Minh City, or insufficient food suitable for followers of Islam.

Eating pork is taboo for Muslims, who tend to eat the animals they slaughter themselves, Cuong noted. His granddaughter-in-law cooked for ex-Ambassador Hussein.

During his ambassadorship in Vietnam, former Ambassador Hussein keenly observed changes in the Southeast Asian country.

The number of Muslim restaurants in Hanoi has soared since 2012, when he first set foot in Vietnam.

As more Muslims flock to Hanoi, Al Noor Mosque might no longer be large enough to accommodate the growing population.

He urged that the edifice, parts of which have fallen into disrepair over recent years, be revamped.

The diplomat also called for the construction of new structures.

The diplomat and his wife have two daughters, aged 6 and 13, who have also learned Vietnamese with native staff at the embassy.

Their younger daughter was sometimes sent to a kindergarten in Hanoi, where she was delighted to pick up on new Vietnamese words.

Among his memories about Vietnam, he cherished most a brief dialogue with a sampan-riding woman whom he met during a weekend vacation to the northern province of Ninh Binh.

“The woman was eking out a meager living, but I was really impressed and inspired by her look of blissful contentment when mentioning her family,” the former ambassador said.

‘I cannot live without pho’

Unlike former Iranian Ambassador Hussein, he had almost no difficulty with Vietnamese cuisine thanks to his first-sight infatuation with ‘pho bo’ (noodle soup with beef).

After cycling each morning to keep fit, he habitually stops by a ‘pho’ shop to indulge in his craving.

“I love eating Vietnamese ‘pho’ and fruits, which makes me complete as a native Vietnamese,” he said.

“I eat ‘pho’ almost every day and cannot live without ‘pho,’” he stressed.

Indonesian Ambassador to Vietnam Mayerfas (left) and his wife cycle in Hanoi. By courtesy of Mayerfas

He recalled that he also enjoyed ‘pho’ up to three times at a Vietnamese restaurant during a brief working trip to Rotterdam, in the Netherlands.

The ambassador proudly shared that he relished the taste of ‘pho bo’ throughout the length of Vietnam both during his working trips and family vacations.

He estimated that he has traveled to 53 cities and provinces across Vietnam, knowing many of the country’s tourist attractions like the back of his hand.

“We may practice different religions or follow none, but we do have many values in common and few differences,” Cuong, deputy head of the Al Noor Mosque management, said.