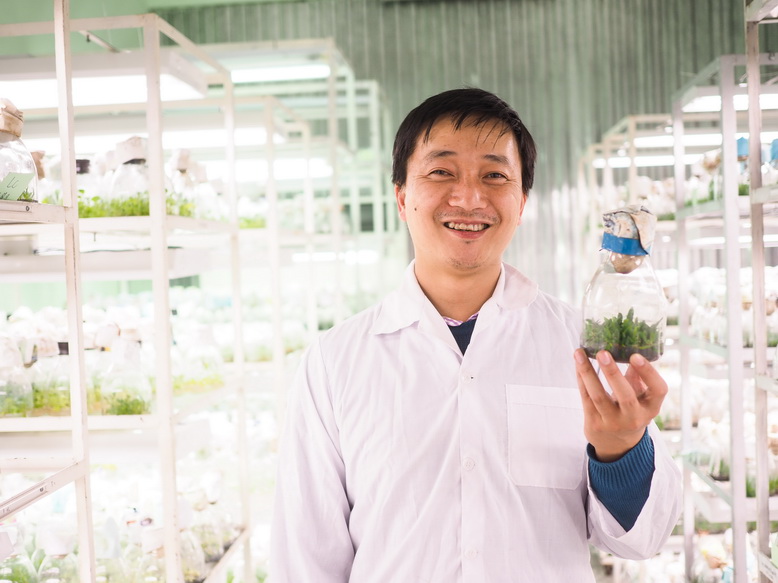 Associate Professor Nguyen Thanh Hai, vice dean of the flora biotechnology department at the Vietnam National University of Agriculture in Hanoi, has spent years working his way toward mastering full control over a plant’s flowering time.

The 37-year-old associate professor is currently focused on identifying herb-based cures for livestock diseases in an effort to guarantee a steady supply of hygienically ensured food for consumers.

Back in the late 1990s, Hai took entrance exams for what is now the Vietnam National University of Agriculture and Hanoi Medical University.  The young standout passed both with flying colors.

After facing the difficult decision on which school to attend, he finally decided to follow in his parents’ footsteps and enroll in the university of agriculture.

His parents, also university lecturers in veterinary medicine, were also named associate professors for their massive contributions to the discipline in 2007.

Hai’s younger sister is currently enrolled in a doctorate program in veterinary medicine in Japan.

Sent by the government to Russia for studies in 1999, Hai decided to focus on biotechnology, a field that was still in its infancy in Vietnam, hoping a degree in the burgeoning discipline would help develop his country’s agriculture sector.

Upon graduating with distinction from Russia’s Tver State Technical University, Hai was admitted to a doctorate program at the Russian State Agricultural University, one of the oldest and leading agrarian educational institutions in Russia.

When he first arrived in Russia, the young man was struck by the immense apple fields housing equal-sized fruits all ripening simultaneously.

He set his mind on one day bringing that technology to Vietnam.

After leaving Russia in 2009 with a doctorate degree, Hai became a lecturer at the Vietnam National University of Agriculture.

With support from his colleagues, the young academician soon found himself focused on research into sensor-controlled flowering systems for roses, orchids, and Butterfly Clerodendrum in artificial environments.

To the researcher’s contentment, more than 50 percent of the culture bloomed synchronously, with a particularly high rate recorded on roses.

“The test-tube flowering mechanism we use has been researched by scientists all over the world, but with only modest success on limited subjects,” Hai said.

He added among the three breeds, all of which are fixtures in the fresh flower industry, the rate of simultaneous blooming amongst orchids is lower than roses, and the orchid blossoms yielded in the experiment are smaller than from conventionally grown orchids

“Our groundbreaking approach will help produce new floral varieties and better cater to flower enthusiasts’ taste and demand,” he elaborated.

However, the approach will only be adopted on costly varieties of flower in greenhouses, netted houses, and the climatic subregion, where flowers are painstakingly tended to by growers, Assoc. Prof. Hai admitted.

The scholar added that he is working to lower the price so that anyone can induce flowers into full bloom anytime, anwhere.

Hai has also applied his profound knowledge and expertise in floral biotechnology to veterinary medicine, his family’s long-standing tradition.

He and his parents, also associate professors in the discipline, are currently working on a state-level research project which involves the use of eight plants commonly used in human alternative medicine, particularly bo cong anh  (Dandelion) and sai dat (Wedelia chinensis), to treat metritis in cows.

The glue extracted from these eight plants is expected to be adopted on affected dairy cows starting 2017, Assoc. Prof. Hai revealed.

“You shouldn’t believe that agriculture is a backward sector, as today’s agriculture is closely linked to high-tech industries. In addition, I believe in the science and I don’t care if someone thinks I’m retrogressing,” Assoc. Prof. Hai replied when asked if he has any regrets compared to his peers with contemporary career pursuits.