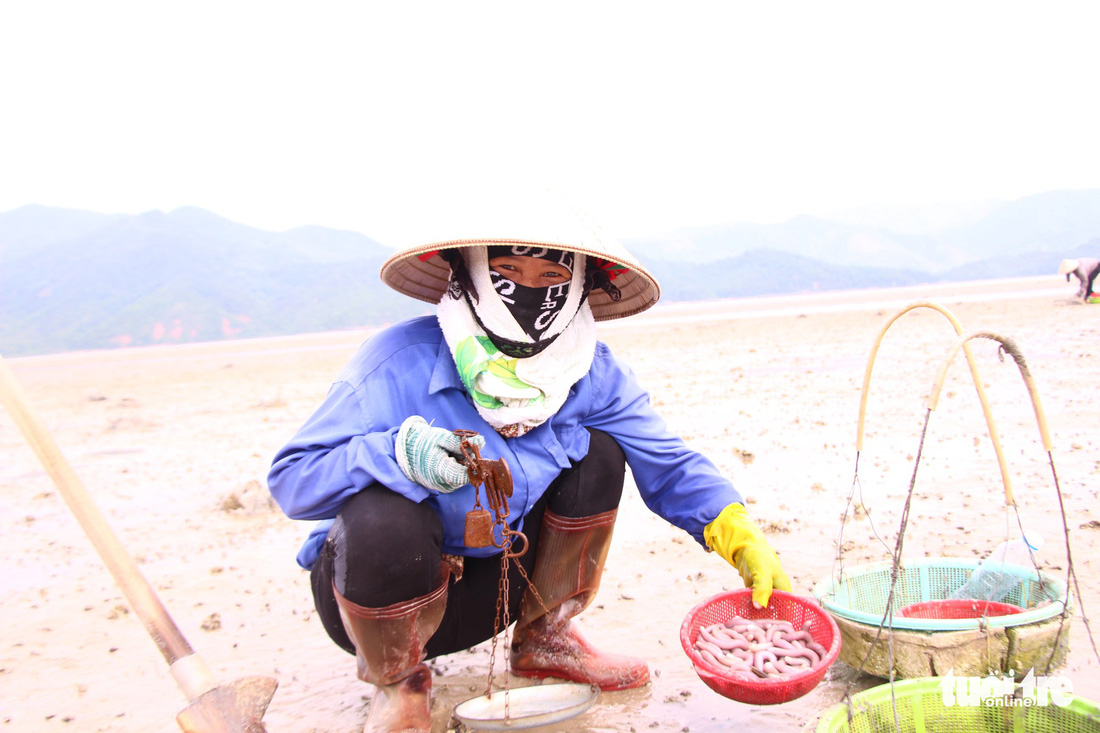 Day by day, hundreds of women, young and old, toil themselves away at the sub-tidal zones and seashores on Minh Chau Island, off the northern Vietnaemse province of Quang Ninh, hoping to find as many peanut worms as possible.

Peanut worms, or sipunculid worms, scientifically known as sipuncula, has emerged as a delicacy in Vietnam.

The food is prepared by cleaning the muscle off the worm, soaking it in vinegar and spices in a style similar to ceviche. It is a common meal for fisherfolk and is a sought-after but not so common appetizer in bigger restaurants.

As Minh Chau is their largest natural habitat in Vietnam, the island without a doubt enjoys its economic perk from this lucrative sea creature, which is sought after in local markets, fetching up to VND350,000 (US$15.38) a kilogram

But the hunting process, which includes pinpointing the possible location of the worms before digging them up, all the while drenching themselves with salty water and scorching heat, is no joke for local women.

On Minh Chau Island, the distribution of labor between local men and women is quite clear. While the men fare the sea to make a living, the women also strive to add up to the accumulative income via hunting for peanut worms.

The harsh occupation is shared by almost all women on the island, as long as one becomes capable enough for the job.

During the day, the women gather at various subtidal zones and seashores around the island, bending their backs and scratching their hands into the sands mechanically.

These peanut worm ‘diggers’ look like a ‘ninja squad,’ as they all keep themselves fully covered to cloak from solar rays, revealing nothing but their eyes. They are also equipped with a plow, a basket, and a pair of insulated boots.

Bui Thi Quyen has only turned 45, but she has been in the practice for more than 30 years.

Quyen said local women would spend around seven to eight hours a day on digging for peanut worms.

“The more peanut worms you find, the happier you are,” Quyen exclaimed.

Digging for peanut worms is no easy job, given the fact that it must be done when the sun is up, and the worms are pretty agile and slippery to boot.

Binh, a fellow peanut worm ‘digger’ of Quyen, said she had managed to sell 700g of the marine worms to local traders.

The 43-year-old woman had to plow four hour straight just to gather that amount of worms.

“If you are hard working enough, the payment is quite handsome,” she shared.

Binh said dried peanut worms are quite a delicacy, but they come at a steep price, VND4 million ($176) per kilogram.

“This is because we need about 11-12 kilograms of fresh peanut worms just to make one kilogram of dried products,” Binh explained.

Nguyen Thi Mui, 37, also agrees that the job is dampening.

“We are getting old pretty fast thanks to this much sunlight and amount of work,” Mui sighed.

But these days, the profession has been somewhat less daunting.

“Thanks to the insulated boots, at least we don’t get cut all over our feet anymore,” Quyen shared.

Even though the occupation is quite lucrative, no one wants to see their children follow their footsteps.

“About 80 percent of us suffer from backache and rheumatism,” Quyen said as she massaged her back.

Bui Van Liem, deputy chairman of Minh Chau People’s Committee, disclosed that around 100 women on the island are pursuing this hunting profession.