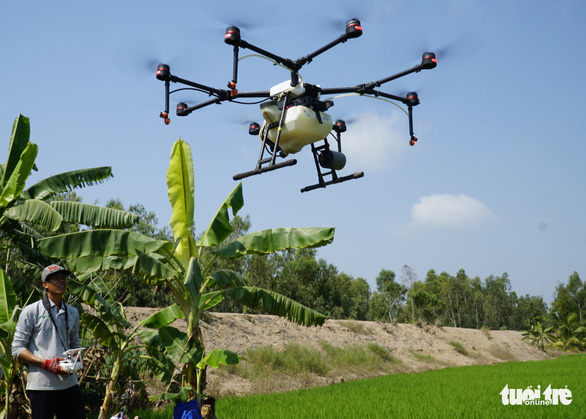 Two agricultural engineers have completely changed the way farming is done in Dong Thap Province, located in Vietnam, where the manpower behind traditional crop-dusting machinery has been replaced by the buzz of unmanned aerial vehicles (UAVs).

When agricultural engineers Lam Trong Nghia and Le Quoc Trung first approached Dong Thap farmers with the proposition of replacing their crop dusting machinery with aerial drones, they were met with little more than laughter.

Now, the sound of laughter has been replaced with the buzz of drones hovering over paddy fields throughout the province as they spray rice paddies with pesticides and other important farming chemicals.

Take a back seat, farmers!

Nghia and Trung’s drones have been given names that help them connect with the culture of Vietnamese farming – Golden Cow and Black Rooster.

So far, their ‘squadron’ is comprised of a pilot, a first officer, and four drones.

The duo expects to add four more to their operations in the near future.

Their operations are simple. Wake up, load the drones onto motorbikes, and carry them across the province to a customer’s field.

Once there, the drones take flight and farmers need only sit back and relax while the pesticide air unit does its job.

Spraying each hectare of rice paddy costs just VND200,000 (US$8.64), the same price as doing the job manually.

Farmer Huynh Van Quang welcomes the drones as a symbol of technology making its way into Vietnam’s countryside.

“I’ve seen farmers in other countries use airplanes for distributing fertilizers and how they harvest using machinery only,” he said.

“It’s great to see us Vietnamese farmers doing the same thing right here on our land.”

To the farmers, using drones for field work is more than just a spectacle.

Crop dusting with drones requires less pesticide and enhances its effectiveness while also taking the heavy physical burden of manual work off the backs of farmers.

Nghia and Trung are no longer the running joke of farmers in Dong Thap. Instead, local farmers now happily remark that being a real pilot takes skill and expertise while being a rice field pilot simply takes weatherproofing and curiosity.

Lam Trong Nghia, 32, is an agricultural engineer working in the aquatic foods industry for the Agriculture Service Center in Tam Nong District.

He was able to pursue a graduate education as part of the Fulbright Scholarship program, a U.S.-funded training program for outstanding academics.

While he originally hoped earning a master's degree would help him in his job hunt, he soon found that the training program instilled entrepreneurial ambitions into him.

“I got caught up with the idea of pesticide drones. I thought I could make it a trend in Vietnam’s agriculture but knew it would be tough,” he said.

To test out his first drones, Nghia traveled to nearby Hau Giang Province to spend time with local farmers and learn about their farming practices.

“After a week of observation and analysis, I was heavily convinced that mini UAVs would be fine for the job," he said.

"That was 70 percent of the battle. The remaining 30 percent was convincing farmers to go along with it.”

Nghia’s first drone was small, but cost as much as a car. Still, he decided to take the risk and launch his business.

In an attempt to win customers’ trust, he offered free services and complimentary plant protection products at a roadshow.

However, 90 percent of those who showed up left before his demonstration even began, Nghia said.

His luck changed later that same day, however, when farmers began to contact him.

“Most of those first callers became my loyal customers. They were quick to adapt," he said.

"I was so thrilled that it didn’t matter if their fields were so far away."

To go far, go together

Nghia eventually realized that he would need help if he was to grow his business and found the perfect partner in Le Quoc Trung, 32, a high school classmate who had also pursued a career as an agricultural engineer.

Trung, a farmer himself, had personal experiences with the ups and downs of farm life and knew that in order to turn drones into a mainstay of Vietnamese farming, he and Nghia would have to put a heavy focus on educating farmers about the proper use of pesticides and other farming products.

For this year’s rice crop, the duo plans to partner with farmers throughout the province to produce quality rice, provide proper consultation, and spray their entire crops.

They believe that higher quality produce will sell well at higher rates and have already struck a supply deal with a buyer in neighboring An Giang Province for hundreds of acres worth of Dong Thap rice.

Tech in the rice fields

The team is researching drone-based multispectral sensing – a method of analyzing the condition of rice plants using an electromagnetic spectrum.

Such insights can help construct a reliable database of geographical features, allowing farmers to pinpoint the locations of plant diseases, water shortages, or surplus fertilizers.

With artificial intelligence doing the analysis, the team simply needs to use the information to develop proper plant protection schemes.

This means the drones can focus specifically on spraying problem areas, rather than wasting pesticides on entire fields.

“Our team is working out how to apply this new technology. We hope that the tech paddy field will soon be a reality,” Trung said.

Trung and Nghia’s idea was entered into a start-up competition where it won first prize in the province and was the second runner-up in the whole Mekong Delta in Vietnam.

Luu Van Tien, deputy head of the Agricultural Development Office in Tam Nong District, shared that the project is in line with current attempts to restructure agricultural practices.

Using mini planes will tackle the question of manpower shortage and reduce environmental impact, he said.