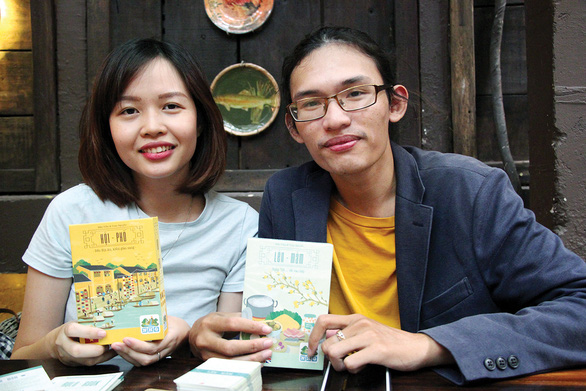 Bonding over their love of board games, Nguyen Thien Toan and Tran Ngoc Tue Man, both 26, have come together to develop their own Vietnamese culture-themed table top games in order to share their passion with the world.

In 2018, Toan and Man, then 24, were both working their ‘dream jobs’, spending their days working in a comfortable, air-conditioned office for a reputable company that offered hefty pay checks and great benefits.

That quickly changed when the two young professionals decided to set out on their own, leaving their cushy jobs to sell clothing online.

When that failed, they had nowhere else to turn except toward their long-time passion: board games.

According to Man, she and Toan first began playing board games together in high school and kept up the hobby during university.

A trip to Australia during their college years, during which they played several board games they had never before heard of, only cemented that passion.

By the end of 2018, Toan and Man had become well-known in Vietnam’s close-knit board game community, and both were attuned to rising concerns about the number of copycat table top games flooding the market.

Unfortunately, most board game lovers in Vietnam were forced to purchase such cheap knockoffs due to the high cost of imported original games.

That was when the duo decided to set up their own board game business, not just to ensure game enthusiasts in Vietnam had access to reasonably priced games, but also to develop their own games which they could use to spread Vietnamese culture to communities around the globe.

“There were some board games which featured Vietnam, but [they] were all about war,” Man said.

To fill the void, Man and Toan set up Ngu Hanh Games, a table game studio through which they design their own Vietnam-themed board games which they sell for affordable prices.

Their slogan? “Bring culture to board games.”

Having had some ideas for games and entered a board game design contest before, Toan and Man created their first game – ‘Len Mam.’

Despite being a finance graduate, Toan took the helm as the game’s graphic designer.

According to the duo, there are several steps to creating a game – choosing the mechanics, developing the story, making illustrations, and writing a rule book.

“The mechanics [of our games] are usually developed by both of us,” Toan explained.

Once the mechanics are agreed upon, Man begins developing a theme and story for the game while Toan fine-tunes the details, decides the conditions for ending the game, and creates special chance cards.

The final steps involve Toan illustrating the entire game and Man writing the rule book and making preparations for play-testing.

‘Len Mam,’ which literally means ‘onto the tray,’ was inspired by the lunar year-end’s signature dishes, as Man and Toan both agreed that food is one of the best ways to represent Vietnamese culture.

In the game, players collect so-called ‘ingredient cards,’ and take turns placing their cards in the center of the table, pretending as if they were adding ingredients to a cooking pot.

Players earn points each time they add enough ingredients to complete a dish and the player with the most points in the end is the winner.

The game’s rule book also includes an explanation of the meaning behind each dish.

“We really just want to bring Vietnamese culture into our games,” Man said.

Man and Toan both agree that receiving the first 300 copies of ‘Len Man’ from the printer was one of the happiest moments in their lives.

For the first several weeks, they even kept copies in their bags to show off around town.

“We went to every board game café we knew of to introduce [Len Mam], invite them to play, and convince them to buy a few sets for their customers,” Man said.

According to Man, the difficulty of developing the game paled in comparison to the door-to-door promotion.

“I know people just wanted to help us with our product, but their opinions were very direct and stressful to listen to,” Man said, adding that they failed to profit from ‘Len Mam’, only selling half of their 300 copies.

“We realized that our inexperience and the poor quality of our product in comparison to those already on the market were to blame for the loss,” Toan admitted.

In the end, Toan explained, it was the flimsy game box and lackluster illustrations that affected the game’s earnings. But still, the duo did not give up.

“Our brothers and sisters in the [local] board game community were still very supportive. They told us to keep going,” said Toan.

A trip to the famous Hoi An Ancient Town offered the inspiration Toan and Man needed for their next board game – ‘Hoi Pho’, the original name of Hoi An.

‘Hoi Pho’ is set in the busy trade city of Hoi An in the 17th century. The game is packaged in an eye-catching yellow box – the symbolic color of the ancient town – which is meant to make a strong first impression on would-be customers.

“We received pre-orders for more than 200 boxes in the [game’s] first week,” Man said.

Notably, a Japanese customer purchased 35 copies of the card game to showcase alongside 600 other titles at the Tokyo Game Market 2019 Autumn, likely the first time a Vietnamese board game was on display at Japan’s largest biannual table top game event.

'Hoi Pho’'s debut at the game market was also featured in a report of the event on boardgamegeek.com, a popular online forum for board game enthusiasts.

It marked the first success Toan and Man had had in the board game industry.

“Although this sales record is very small compared to other board game companies’ on the market, it has helped us gain confidence in the path we chose,” Man said.

Man shared with Tuoi Tre News that her studio recently sold more than 100 sets of the new edition of ‘Len Mam,' complete with an updated rules book and an English translation, to a buyer in Taiwan.

According to Toan, Ngu Hanh Games is currently focused on Vietnamese customers, though foreigners are able to buy a copyright for the games to produce their own.