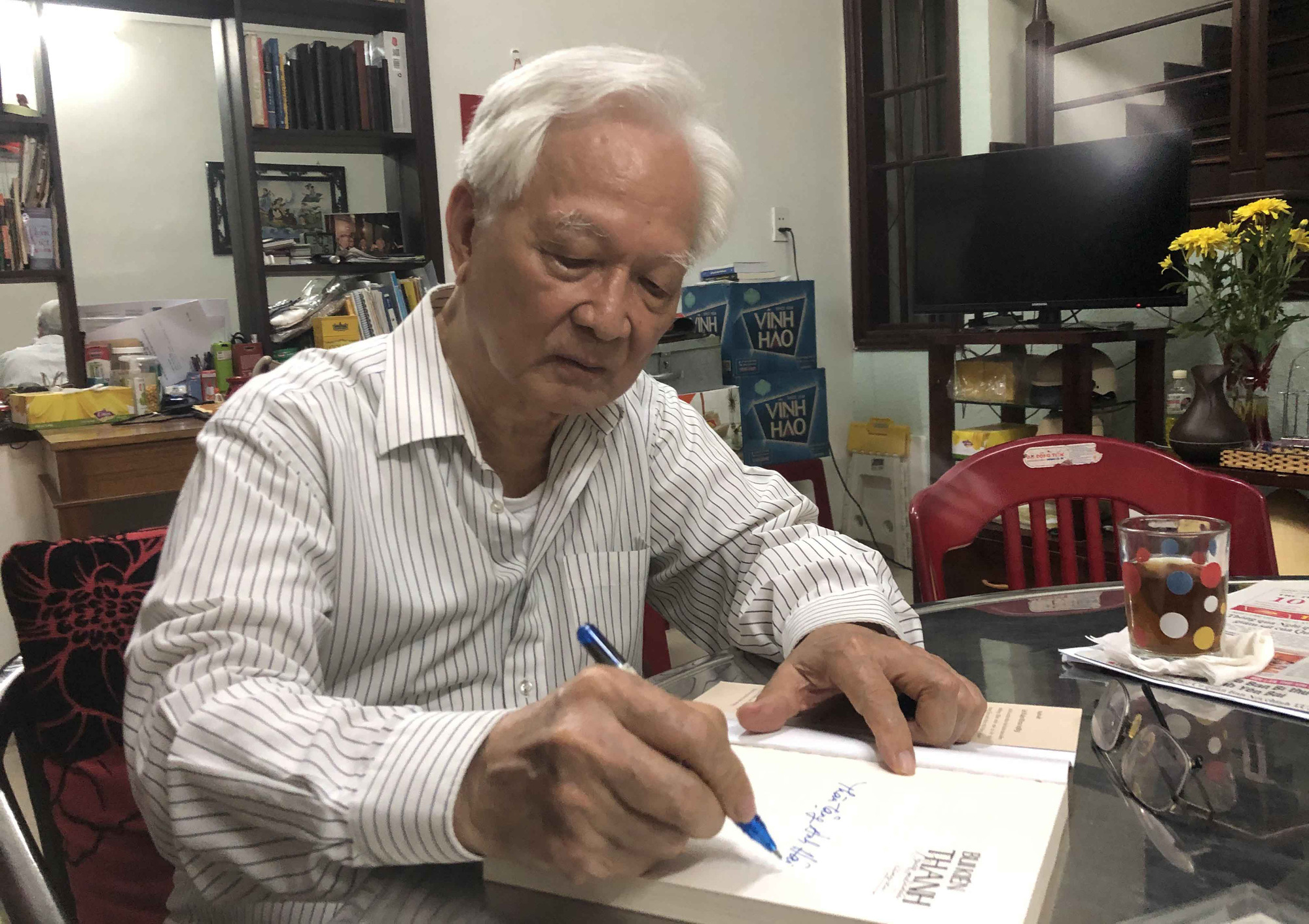 On the road leading away from the tourist-packed ancient town of Hoi An in Quang Nam Province, an octogenarian produces neatly designed, Western-influenced business cards for anyone lucky enough to visit him, a habit from his previous profession — bridging the gap between Vietnam and the U.S.

Bui Kien Thanh’s refined mannerisms check out with his backstory: a former representative at the United States office of the defunct Republic of Vietnam’s National Bank and an ex-realtor in France.

He used to be the special assistant to former President Ngo Dinh Diem during his presidency of the Republic of Vietnam, and he was later known to be one of the agents who bridged the gap between Vietnam and the U.S. during the inception of Vietnam’s open-door era.

Thanh was born in 1931 into an established household.

His dad was a successful entrepreneur and Thanh enjoyed a pleasant childhood. But he was faced with an array of challenges later in life, the details of which he captured in his autobiography Bui Kien Thanh – Nguoi mo khoa lang du (Bui Kien Thanh – The Debonair Lock Breaker).

Early in his career, Thanh was sent by the Diem administration to New York, with financial support from the International Cooperation Administration, to study central banking operations in an attempt to rebuild infrastructure.

After a year of study, Thanh was invited to stay in America and was appointed to be the representative of the National Bank in New York all at the young age of 25.

Before moving back to Vietnam in the early 1990s, Thanh found himself frequently traveling between France and the United States.

In 1984, he was recruited by an insurance company now known as American International Group, an entity that Thanh used to represent back in his days in Saigon, the old name of Ho Chi Minh City.

Experience in international economics and connections with American executives and politicians acted as the premise for Thanh’s deeply influential work in the normalization of Vietnam-U.S. relations.

He was one of the advisors who contributed to the momentous Doi Moi (Renovation) policy of Vietnam in 1986, with the focus set on extending economic ties and its subtask of normalizing bilateral relations with the U.S.

Thanh still takes pride in his work opening up the conversation with Vietnamese economic reformists in the early 1980s, including incumbent Vice-President of the Council of Ministers-turned-Minister of Home Affairs Pham Hung.

After months of discussions, the Vietnamese government came to the unanimous conclusion that “only when the people become prosperous can the nation become stronger,” according to Thanh.

Staying to help as long as he could

The normalization of Vietnam-U.S. relations was attributable to the pre-existing desire for it from both parties, Thanh said.

As proposals on normalizing the relationship with Vietnam had been voiced within the realm of American politics from as early as 1975, the go-getting economy of a 1986 Vietnam could not skip out on such a lucrative market as the United States — the biggest economy of the world.

Between 1986 and 1987, some Vietnamese leaders showed a willingness to enter negotiations with the U.S., but they could not reach out due to the limited communication channels.

The option to start the conversation via Sweden, one of the earliest diplomatic linkages of Vietnam post-1975, was not viable because of conflicting stances of both sides on Vietnam’s part in the unrest in Cambodia then.

Utilizing his connection with American figures, Thanh once again acted in the process as the bridge of diplomatic conversation.

“Since I am one of the few [people in Vietnam] with a history of working with government higher-ups as well as the social and economic echelons of America, whenever the Vietnamese government needs to liaise with the American government, I can provide support by linking up [Vietnamese officials] with their American counterparts,” Thanh said.

“This work that I have done for years is more like a personal mission to me. Not because I’m excellent or anything, I just happened to be in the right position to do it."

For dozens of years now, Thanh has never ceased his commitment to solving the imperative requirements, inching toward the reconciliation of Vietnam-U.S. bilateral relations, using resources obtained from the former administration to fill the gap between the two countries.

As he mentioned earlier, there might be others who are as talented as him, yet not everyone would have stepped up and dedicated themselves to the common good as he did.

For the octogenarian, half a decade of back-and-forth travel and tenacious advocacy for Vietnam-U.S. relations can all be traced back to a vision bigger than himself.

One of the women living with Thanh talked about his health and the frustration of his progeny for his refusal to move to America.

“He said he needed to stay in Vietnam to help, as long as he could,” she divulged.

The Vietnam-U.S. dynamics have progressed so far, from being former enemies to the official normalization of relations in 1995.

Over the past 25 years, their bilateral ties have been enhanced on every facet.

U.S. leaders have praised the proceedings of normalization and development of the relationship on multiple occasions.

The chronicle of the rapport has the potential to become an exemplary 'foes to friends' case study, claimed Nguyen Quoc Cuong, who served as the Vietnamese ambassador to the U.S. in 2011-14.

The 25-year journey came to fruition from a deep understanding of historical context as well as the international and domestic landscape.

Even after the normalization, there remains hurdles and complications in the linkage between the two countries, one of which is cynicism, or lack of trust.

This is not an issue that can be flipped overnight since the two countries uphold different political and social systems, were once arch-enemies, and had a history of sanctions and isolation imposed by the U.S. that extended well beyond 1975.

The resolution for this issue is none other than mutual trust-building via cooperating on a leveled basis as well as respecting each other’s system, independence, sovereignty, and territorial integrity.