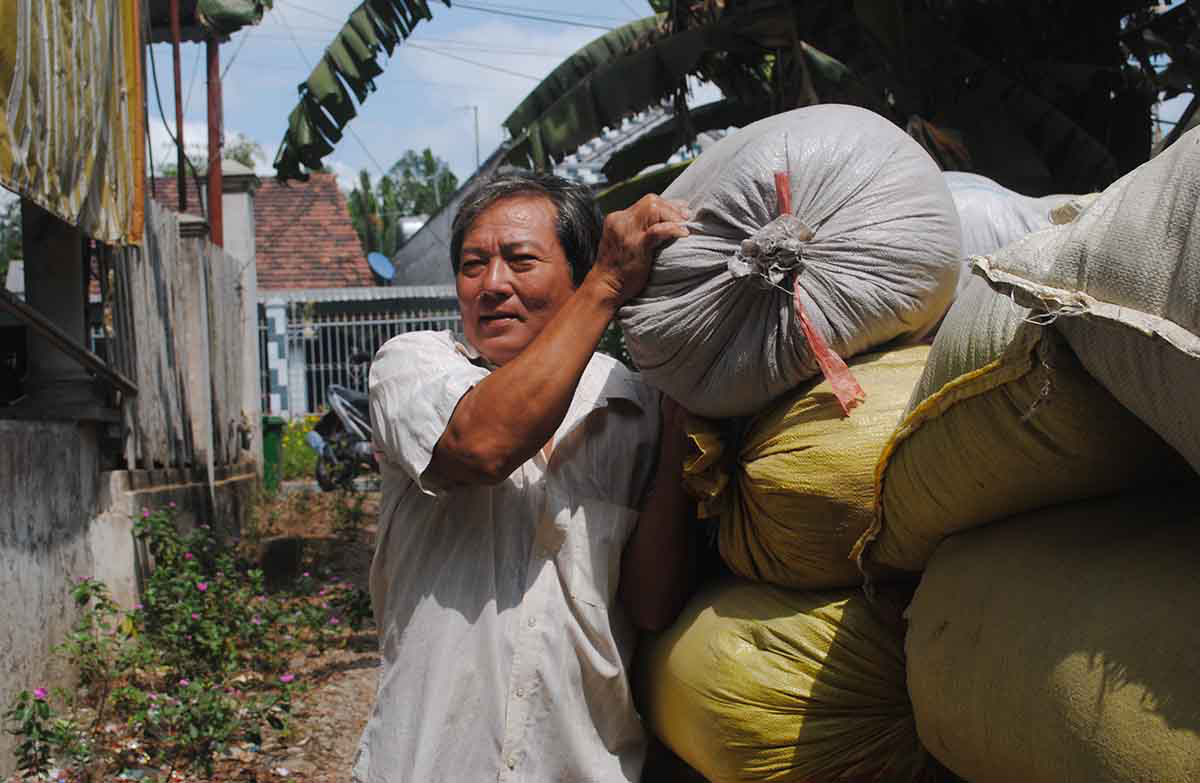 People in the Mekong Delta province of An Giang do not mind getting dirty and inhaling toxic dust as they spend days afloat collecting ash and selling it for compost to make a living.

Unlike fruit, flower, and vegetable sellers who typically gather at floating markets on rivers crisscrossing the Mekong Delta, these traders deal in ash, a greyish agricultural by-product which was considered waste in the past.

Tra Thon Canal, snaking through Long Dien B Commune in Cho Moi District, An Giang Province, is lined with dozens of sampans heaped with ash.

According to Cao Van Bet, 45, who has earned his living as an ash trader for 15 years, each ash collecting trip takes seven to ten days.

The lack of agricultural machinery in the region in the 1970s meant farmers had to thresh rice manually and pile the leftover straw into heaps on the paddies without knowing what to do with it.

There was no need for more fertilizers because the soil was already naturally enriched by silt-laden rivers, so traders like Bet saw an opportunity.

“We would go to the field owners to ask for unused straw after harvest and collect ash reduced from burning it. One hectare of paddy would yield 20 to 22 kilograms of straw ash,” he recalled.

As the stock in their own locality ran out, the traders turned to neighboring districts or even provinces nearby including Dong Thap for more straw to turn into ash.

Apart from straw, other sources of ash include charcoal and wood, Bet added.

Ash compost is applied to paddies and orchards or sold to flower growers in the Sa Dec Flower Village in Dong Thap Province or its Cai Mon counterpart in nearby Ben Tre Province, which have become well known amongst locals and foreigners.

The fertilizer later found new markets in the provinces located north of Ho Chi Minh City including Binh Duong and Tay Ninh, where farmers applied it on the soil which is less fertile than that in the Mekong Delta so they can grow peanut, papaya, and cassava crops.

With Tra Thon Canal alone home to around 300 ash trading households ranging from sourcers, sellers to buyers, the area is usually bustling with commotion.

The otherwise valueless by-product has earned many locals a good living.

“Many families have bounced from daily grind to a financially secure life. They can provide for their families, support their children’s education, and build houses,” Tran Phi Long, 53, who has been on the job for more than 30 years, said, adding each trip earned them a profit of about VND1 million VND (US$43), which is less than what they had previously received.

It is taxing work, involving early mornings, inhaling the dust, and getting ash in their eyes.

“After one day of hard work, we can get about 200 sacks, or two metric tons at best. It’s really irritating to have ash in your eyes or nose,” Long said, adding the job also gives collectors what they call ‘ash tan.’

Sacks are then loaded onto sampans for sale, each of which can carry up to 1,500 sacks in one go.

Ash vending trips normally last from one week to 20 days, with two or three men on board to help with the sacks.

“I quit the job some years ago over old age after accompanying him on the trips for dozens of years. Those who stick to the job now just scrape by earning a modest profit,” Lam Thi Kim Dung, Long’s wife, said.

“Many have given up as the job takes us away from home for up to one month and poses health hazards,” 68-year-old Nguyen Minh Hai shared.

Despite meager profits and health risks, some young men are still keen to follow in their fathers’ footsteps.

Long said he is considering ‘retiring’ and passing the trade altogether on to his son, 31-year-old Tran Phi An, who has picked up the tricks after working as Long’s assistant for the past few years.

“I’m terribly homesick during the trips, but I’ll try to follow my father’s career,” An said.

“I’ll hold on to the job as long as there is still demand for ash. Every job has its own merits,” the 19-year-old man shared.

In recent years, traders have switched to rice husks over the scarcity of straw and wood ash. Their clients are mostly brick kilns and factories which use the husks as burning materials.

Hoa Do Canal, snuggled in Lai Vung District, Dong Thap Province, is the meeting point of sampans loaded with tons of rice husks.

Le Quoc Tuan, 39, who has been on the job for nine years, said he now boasts a ‘fleet’ of three sampans with a capacity of approximately 12 metric tons of husks.

“We don’t make handsome profits, but can get by on the job, which is done seasonally, along with rice crops,” he said.