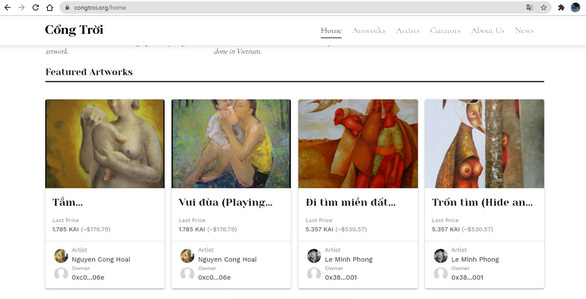 As non-fungible tokens (NFT), a blockchain technology, appalls the art world after helping artists sell their digital pieces for millions of U.S. dollars, Vietnamese hopefuls are also expecting a radical shakedown from the launch of the country’s first ever NFT-based art marketplace Cong Troi.

From the very onset of its existence, the modern Vietnamese art scene has always been considered ‘one step behind’ from the global status quo.

During the 1970s and 1980s, international art dealers arrived in Vietnam, an uncharted territory of the art world, to snatch the country’s invaluable artworks back home at nominal prices.

Fast forward to the 2010s, artworks from the iconic graduates of the erstwhile Fine Arts College of Indochina, namely To Ngoc Van, Tran Van Can and Nguyen Gia Tri, whose influences are still seen in Vietnamese art till this day, have just started gaining exposure at the international auction houses, despite having been revered by art lovers worldwide for years.

Now, as the emergence of NFT bode winds of change, Vietnam’s art enthusiasts are seeing a chance to rise to the occasion.

Seeing its first mainstream media coverage in 2017, NFT has gradually gained traction and eventually became the talk of the town after its involvement in groundbreaking auction of ‘Everydays: The First 5000 Days,’ a collage consisting of 5,000 artworks of the digital artist Beeple, which sold for US$69.3 million in March.

NFTs can be described as a blockchain-powered digital signature that, once plastered onto digital assets, allowing anyone to verify the ownership and authenticity of items. In other words, NFT makes each piece of digital content unique and, henceforth, appealing to collectors.

Various digital assets, including, drawings, music, and even internet memes, can be sold using NFTs, but a lot of the current excitement is around using the tech to sell digital artworks.

Through Cong Troi, collectors have the ability to seek NFT ownerships of a digitized artwork, such as a video clip, 3D paintings, digitized autograph, or a portion from one’s favorite song from a body of work curated by moguls in the local art community.

“The idea is for a collector to receive a sense of personal intimacy with the artwork, which is a sentimental value that is invaluable when you are a die-hard fan,” the Cong Troi website explained.

According to Pham Toan Thang, the project was initiated in October 2020, when NFT has just picked up in popularity. He also recruited the help from Vietnam’s homegrown blockchain system KardiaChain, which provides NFT solutions for the platform.

In the first place, Thang was inspired to create Cong Troi after his meeting with famed artist Pham Cong Thanh, who said he had intention to sell his artworks as his family wishes to keep them.

However, Thang found out that Thang’s works, once digitized, can be sold to the public via NFT means, while the originals still belong to the artists.

NFT can also introduce works of art that have never been seen in public to a new generation of audiences, which have significant cultural impacts as witnessed from the recent publication of artworks from famous painters Bui Xuan Phai and Thanh Chuong.

Digitization holds undoubted benefits to an artist’s oeuvre, as it immortalizes artworks against the test of time. Coupled with the prospects of blockchain trading, NFT marketplace is proving itself art’s next big thing with impacts that can change the discipline forever.

Ever since the Beeple bombshell, NFT has consistently made headlines, which draws hordes of hopeful investors into the digitized art trading platforms.

However, experts are also showing skepticism of a new Tulip mania in the making, with risk of market crash looms above each purchase.

As Thang sees it, the current NFT hype is not worth paying attention to.

“Instead of giving heed to NFT investing, I think more about the potential of this technology. Imagine a few hundred years later, when we’ re still able to keep the authentic artworks, even when the originals have given in to time!”, Thang pointed out.

“We would not be able to preserve all the artworks in the world, but technology can.”

“Cultural legacy should not necessarily be kept in physical forms, as their immutable values require a compatibly immutable means of preservation.”

For his brainchild, Thang is considering the fusion between a trading platform and a virtual gallery, where collectors can showcase arts that they have gathered to the public.

On Cong Troi’s website, a piece by artist Luong Luu Bien currently holds the crown as the highest priced artwork, being listed at nearly $1,000.

It is revealed that the trading platform takes a 10-percent commission for each transaction successfully made on the website.