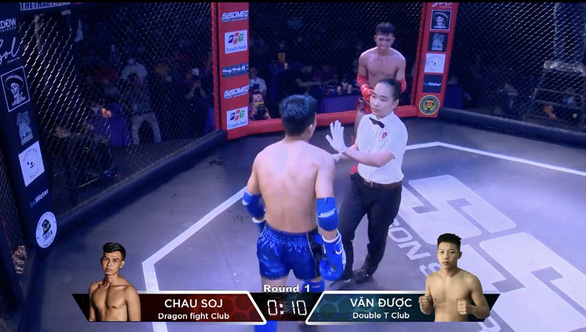 Bui Thi Nhat Le is one of just a few Vietnamese female boxing referees to earn one-star certification from the International Boxing Association (AIBA), and her story is one of dedication and perseverance.

Le, 27, was a professional boxer for several years before embarking on a career in pharmacology. But even after hanging up her boxing gloves, she could not stay away from the sport.

It did not take long before she found herself back in the ring, but not as a fighter, as a referee.

Le is not very big, but she still manages to stand out amidst the blood, sweat, and tears in the ring.

It might come as no surprise that she was the only female referee officiating that evening.

“Despite being a friendly competition, the event hosted a few fights between top-notch martial artists from across the country. There was a lot of pressure on us referees,” Le shared.

“I was constantly on the move, trying to keep pace with the fighters. I was so nervous about making a bad call that I even did my best not to blink.”

In a former life, Le was a boxer, kickboxer, and Muay Thai fighter, carving out a career for herself a professional boxer for a team representing Quang Ngai Province.

Despite her hard work, she never quite broke away from the pack. Her best tournament finish during her career medal was a single silver medal.

Eventually, Le decided that a different career would be her best bet at building a secure future for herself and she decided to hang up her gloves and began a career as a pharmacist working for a hospital in Ho Chi Minh City.

But she did not last long in her new career. The call of the ring was too tempting to ignore.

She soon quit her job and, from 2015 to 2018, enrolled in referee courses. Upon graduation, she began officiating at the Vietnam Boxing Federation (VBF) and eventually beat out nearly 60 of her colleagues to earn a spot amongst Vietnam’s 40 national boxing referees.

In late 2018, she earned a one-star referee certification from AIBA – one of very few Vietnamese women to achieve such an accomplishment.

As an AIBA referee, Le started at the bottom, first spending three years working as a commentator, time referee, and judge, before being promoted to a main ring referee.

“[Working] outside the ring allowed me to learn and gain enough experience for my current job [as a ring referee],” she said.

Vuong Trong Nghia, one of Le’s male colleagues and an AIBA three-star referee, shared that females are few and far between in the sport.

“You don’t come by female fighters every day, and female referees are even rarer,” he said.

“It’s impossible to stick to this job unless you have passion and perseverance. As referees, we get our fair share of negative reactions and criticism.”

A common difficulty for boxing referees is facing protest from losing athletes and their coaches who feel they have been cheated out of a win by poor calls.

When accusations of favoring and bias get tossed around, it takes physically and mentally strong referees to deal with it.

Fortunately, Le is up to the task.

“There was one match where as soon as the referee blew the whistle, the losing side rushed to the referees and judges. They threw the referees’ desk and threatened to penalize us for what they called ‘unfair decisions’,” she recalled.

After such situations, the team of referees who officiated the match typically hold a working session with their supervisors to review recordings each call.

“We [referees] still have to deal with criticism even after inspectors announce the final decision,” Le explained.

Le also noted the difficulty in catching fighters purposely violating rules and attempting to hide their actions from the refs.

“A rule-violating strike into an opponent’s genitals can immediately turn the tables. Offending boxers tend to make use of referees’ ‘blind spot’ or a three-second break as a way of trying to get us to make inappropriate decisions,” she explained.

According to Nguyen Van Hien, VBF’s deputy general, Vietnam currently has a shortage of boxing referees.

As stipulated by AIBA, a referee must rest for two matches following each match they officiate.

In Vietnam, that is sometimes not possible.

“At several boxing tournaments, referees have had to officiate several consecutive matches,” he added.

Hien also pointed to VBF’s current inability to adopt incentive policies for boxing referees compared to their counterparts in other sports areas.

Another hurdle, Hien said, is that AIBA-recognized referees have their certificates revoked if they remain professionally inactive for four years.

To strike a balance between earning a living and fulfilling her dream of being on the ring, Le also works as an amateur boxing instructor and a retail and wholesale rice seller.

Hien also noted Le’s work at a Ho Chi Minh City Young Boxing Tournament in 2020, sharing that she made the difficult decision to send an athlete out of the ring after he and his coach hit her.