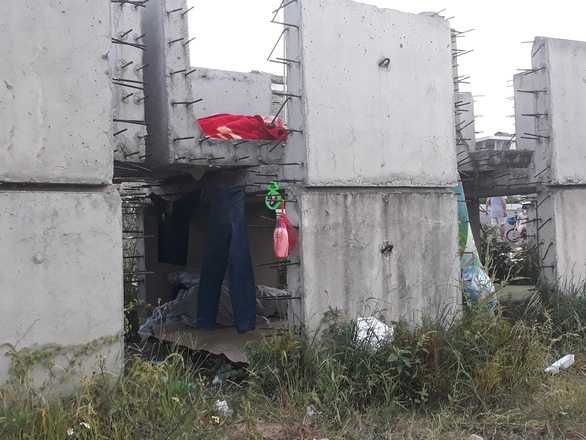 Hundreds, if not thousands, of children living on the streets in Hanoi have found themselves amongst the city’s most vulnerable groups amidst the resurgence of COVID-19 in Vietnam.

After nearly two years of economic havoc caused by the COVID-19 pandemic in Vietnam, many local youths have been fleeing their hometowns for bigger cities in search of meager incomes they can send back to their families.

Unfortunately, the vast majority of these children have found themselves without a roof over their heads, either working in terrible conditions or with no work at all.

No place to call home

As COVID-19 causes conditions to grow worse in the capital city, ‘camps’ of street children are popping up near sewage pipes, under bridges, and in open spaces under freeways, typically marked by worn-out clothing and bedding slung over railings and empty packages of instant noodles scattered nearby.

The most popular of these ‘camps’ are located near some of Hanoi’s most famous landmarks, including My Dinh Coach Station in Tu Liem District, Thong Nhat Park in Dong Da District, and Hoan Kiem Lake in the city’s downtown area.

While bridges and pipes shelter the children from downpours and blistering heat, they fail to protect them from the clouds of mosquitoes that invade the city at night.

One of the youths who calls these camps home is Nguyen Xuan Dung, whose name has been changed to protect his identity.

Though Dung looks like a 12-year-old, he is, in fact, a 19-year-old from Phu Tho Province who has spent the past two weeks sleeping on the streets since the restaurant he worked at was forced to close.

Broke and in an unfamiliar city, Dung has found himself with nowhere to turn.

“I have no choice but to stay here. I’ll be put in quarantine if I come back to my hometown,” Dung said.

Dung ran away from home five years ago after his parents’ divorce.

Since then, he’s been working odd jobs trying to make ends meet, from peddling small goods and helping out at eateries to day laboring on construction sites.

Dung’s most recent employer was a pho stall in Thanh Xuan District. Prior to the pandemic, Dung had been working daily from 4:00 pm to 4:00 am, bringing in VND4 million (US$173) per month, with much of that money being sent home to support his younger brother each month.

Minh and Hung, two other boys living in one of Hanoi’s youth homeless camps, were in a similar situation.

Though Minh, 14, was born in Hanoi and Hung, 16, was born in Dien Bien Province, about 456 kilometers from the capital city, the two have been friends since they first crossed paths.

Prior to the newest wave of COVID-19, the duo had been working at a construction site in Tay Ho District during the day and spending their nights sleeping outside gaming centers.

Now, after losing their jobs and with gaming centers shuttered, the duo have found themselves struggling to find safe spaces to sleep.

The International Labor Organization estimated in April that between 4.6 and 10.3 million workers in Vietnam have been affected by the pandemic.

As estimated, over one million children between five and 17 years old are already engaged in child labor in Vietnam, with more than half working in hazardous conditions.

These children are particularly at risk due to the impacts of COVID-19 and vulnerable to other safety concerns, including trafficking and sex abuse.

From the north-central province of Thanh Hoa, Hoang and Linh, whose names have been changed to protect their identities, had just arrived by bus at My Dinh Station when they began receiving tempting job offers from complete strangers.

They were promised light work and high monthly salaries as construction workers and peddlers, with salaries fluctuating from VND7 million (US$303) to up to VND15 million ($650), with room and board included.

With money still in their pocket, Hoang and Linh thought the offers were ‘too good to be true”, but admitted that they may change their minds when their money runs out.

Dung shared that he once took a job from a broker, a decision he quickly regretted as the work was taxing and the pay was low.

He added shared that he once worked as a candy, flower, and toothpick peddler, racking up nearly VND15 million ($650) in sales after roaming streets in harsh weather for 12 to 16 hours a day, but pocketing only VND5 million ($216).

“Street children are particularly prone to male pedophiles, with no food to eat and no place to take rest in,” one social worker said.

Dung himself has been the target of such abuse, and has a photo of himself amongst a group of older males to prove it.

Fortunately, he was rescued by Blue Dragon Children's Foundation, a non-profit organization dedicated to aiding street children in Hanoi.

“The sexual abuse of male children is just as vicious as that of their female counterparts. The victims are hurt both physically and emotionally,” said Do Duy Vi, director of the foundation’s street children program.

Vi has come to multiple rescues of children from Vietnamese and foreign pedophiles.

Like everyone else, Dung is yearning for the situation to return to normal.

“I hope the epidemic will soon wane and be finally over so that I can find a job,” Dung shared.