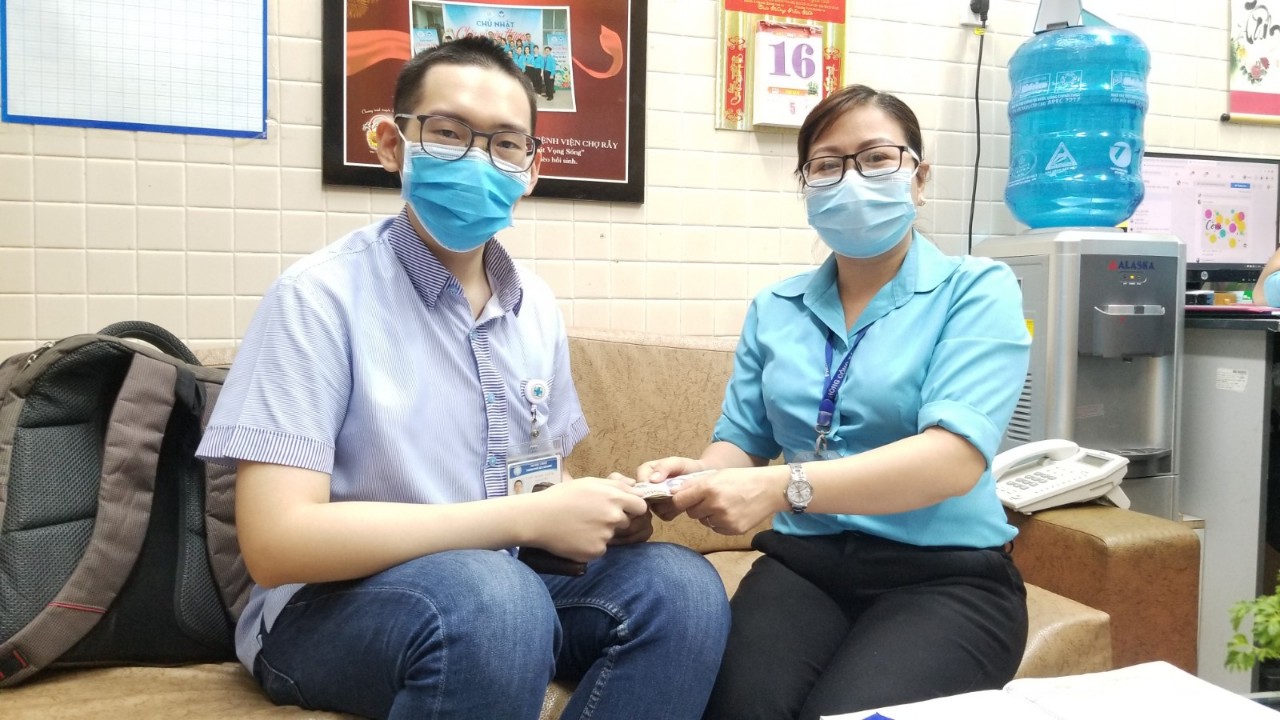 For nearly a decade, Doan Luc Nghi has donated his academic scholarship to needy hospital patients in Ho Chi Minh City with nowhere else to turn.

Nghi, a 24-year-old senior at Ho Chi Minh City University of Medicine and Pharmacy, has had no qualms with donating the entirety of his academic scholarship to needy hospital patients in Ho Chi Minh City for the past nine years.

At Cho Ray Hospital, where the patients Nghi helps receive treatment, both patients and staff consider Nghi’s support a godsend.

Do Thi Thanh Lan, a staff member at the hospital’s Social Work Department, dubbed by patients as the ‘room of love’, has spent nine out of her ten-year-career at Cho Ray welcoming Nghi’s donations.

According to Lan, Nghi – then a 10th-grader at Le Hong Phong High School for the Gifted in Ho Chi Minh City’s District 5 – was shy the first time he visited the hospital to make a donation.

It took some digging before he finally admitted that the money came directly from an academic scholarship he had been awarded.

Since then, Nghi has visited the hospital twice a year, every year, to donate his scholarship money to patients in need.

Nghi’s high marks throughout his academic career, as well as earning a top-notch score on the national high school graduation exam, helped earn him admission to the Ho Chi Minh City University of Medicine and Pharmacy, one of the country’s highest ranked medical universities.

After spending nearly a decade helping patients financially, he is eager to expand his support to the realm of medicine.

“The more I cover in my curriculum, the more challenging my school work becomes. This means it’s become quite difficult to continue earning scholarships,” Nghi shared.

“What keeps me motivated is the patients who are dying for money to pay their medical bills. My academic performance not only means I’ve gained knowledge, but it also empowers me to help the needy.”

Though Nghi’s family is not particularly well-off, altruism is a value that he and his parents hold near and dear.

His father works at a state-run company while his mother earns a living as a tailor.

Together, they live in a 30-square-meter house at the end of a narrow alley in District 10.

As a child, Nghi would follow his now 51-year-old mother, Luc Thi Yen Nga, to major hospitals in the city to lend a hand to needy patients.

Those moments stuck with him, eventually leading to him seeking out an internship at Cho Ray.

“One night after work I saw a father sleeping with his child in the hospital corridor,” Nghi recalled.

“It filled me with emotion.”

Other inspirational moments for Nghi include learning about a group of caregivers who sought treatment for an orphan suffering from critical heart disease from doctors throughout the country.

Such care and empathy is what motivates Nghi to continue helping others.

“What I do may be small, but I just want to lend a helping hand,” Nghi said.

Currently, Nghi is training hard to become a qualified doctor so that he can continue to help.

Of course, Lan and the other healthcare providers at Cho Ray are excited to know someone with such dedication will likely join their team in the near future.

Until then, however, he plans to continue helping in whatever ways he can.

Le Minh Hien, head of Cho Ray Hospital’s Social Work Department, shared how impressed he is with Hien’s dedication to the hospital and its patients.

“The youngest donor here, Nghi, has been active in the hospital’s charitable work over the past nine years,” Hien said.

“We’re moved that he is able to help others through his own academic achievements.”

According to Lan, over the past nine years Nghi has made more than 20 donations, totaling more than VND50 million (US$2,195) in value.

His aid, along with that from many other benefactors, is not only a physical gift, but also a spiritual boost and source of strength that has helped many patients recover.