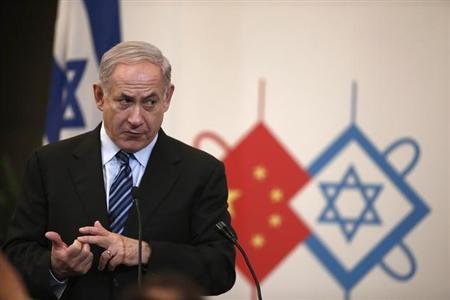 China issued veiled criticism of Israel on Monday as its prime minister, Benjamin Netanyahu, began a visit, saying China opposed the use of force and urged restraint and the respect of sovereignty after Israel launched strikes in Syria.

"We oppose the use of military force and believe any country's sovereignty should be respected," Chinese Foreign Ministry spokeswoman Hua Chunying told a regular briefing.

Hua, who did not mention Israel by name, was speaking as Netanyahu began a five-day trip to China.

His trip coincides with a visit by Palestinian President Mahmoud Abbas as China tries to shore up its role in a region where its diplomatic influence is limited.

China, a permanent member of the U.N. Security Council, has traditionally had a low profile in Middle Eastern diplomacy, but it is keen to assert a role as an important participant in international politics.

Hua, asked if China would urge Netanyahu to stop air strikes, said the Israeli leader had yet to meet Chinese leaders. Netanyahu is due to meet Premier Li Keqiang on Wednesday.

Netanyahu did not mention the air strikes during a speech to the Israeli business community in Shanghai, and later declined to answer a reporter's question about the strikes.

Chinese President Xi Jinping urged Abbas to hold peace talks with Israel, the Chinese Foreign Ministry said in a statement, but stressed that Palestinian rights were key to stability.

"So long as the legitimate national rights and interests of the Palestinian people are not restored, peace between Palestine and Israel cannot be realized, let alone regional peace and stability," Xi said.

Xi made the remarks in a meeting with Abbas, who, a month earlier, had discussed with U.S. Secretary of State John Kerry a revival of Israeli-Palestinian peace talks.

China has tried at various times over the years to mediate in the Israeli-Palestinian conflict but with little apparent success.

Beijing has maintained close relations with the Palestinians for decades. In recent years, it has also cultivated good ties with Israel, especially in the field of defence.

Xi said his "four-point proposal on the settlement of the question of Palestine" should include a recognition of an independent Palestinian state.

"At the same time, the existence of Israel and its legitimate security concerns should be fully respected," Xi told Abbas.

It was unclear whether Netanyahu and Abbas would meet in China. "(China) is willing to offer necessary assistance if the leaders of Palestine and Israel have the will to meet in China," the Chinese Foreign Ministry said.