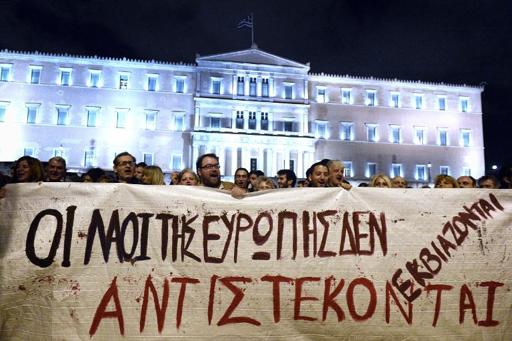 Greece's new government headed for a showdown with sceptical European partners on Wednesday as it took its demands to renegotiate its huge bailout to crunch talks in Brussels.

The emergency meeting of eurozone finance ministers promises to be bruising, with Greek demands for a cash lifeline and a relaxation of austerity facing resistance from Germany in particular.

Markets worldwide are spooked by the renewed threat of Greece crashing out of the euro, with the country's massive EU-IMF bailout set to expire at the end of February, leaving it at the risk of a default.

"I want to repeat today, no matter how much (German Finance Minister Wolfgang) Schaeuble asks it, we are not going to ask to extend the bailout," left-wing Prime Minister Alexis Tsipras told lawmakers Tuesday before his government won a confidence vote.

The new government is riding a wave of popularity in Greece, emboldened by the 40-year-old premier's defiance of Germany and austerity, which Tsipras has tempered with pledges to keep Greece in the eurozone.

But Greece has also ramped up threats to look to Russia or China for help, further raising the stakes for European unity as it wrestles with economic stagnation and the crisis in Ukraine.

Tsipras has been invited to Beijing to meet his Chinese counterpart counterpart Li Keqiang, a government source said Wednesday, while the new Greek foreign minister was expected later in Moscow.

Defence Minister Panos Kammenos on Tuesday said Athens could look for a "plan B" if the EU fails to help, which could involve Washington, Beijing or Moscow.

Greece's new Finance Minister Yanis Varoufakis said before heading to Brussels that "his is the first government that goes to the Eurogroup (of eurozone finance ministers) standing up, not bowed".

The eurozone talks, set to begin at 1630 GMT, will see Greece plead its case to the eurozone's 18 other members, most of whom are loath to give Athens leeway on its mountain of debt, which most analysts believe will never be repaid.

Varoufakis will ask his counterparts to forget the current 240 billion euro ($270 billion) bailout, in favour of a new arrangement that would take the plight of ordinary Greeks into account.

The Greek proposal would see Athens stick to 70 percent of its bailout commitments but overhaul the remaining 30 percent. Greece also wants a debt swap that will focus on economic growth.

Crucially, the government wants a bridging loan until September to buy time to hammer out new reforms.

At the same time it insists on raising the minimum wage and ditching an unpopular property tax, reversing key reforms demanded by the EU and IMF of previous Greek governments.

Tsipras announced plans on Wednesday to draw up a new programme of reforms with the OECD -- the economic club of rich nations that has criticised the EU's embrace of austerity.

The programme will be based "not on what was previously decided but on popular mandate," he said after meeting Angel Gurria, head of the Organisation for Economic Cooperation and Development.

Greece was first bailed out in 2010 and Athens is still subject to inspections by its troika of creditors -- the European Commission, International Monetary Fund and European Central Bank.

On the eve of the talks, which will also include the head of the IMF, Christine Lagarde, and ECB chief Mario Draghi, Germany's Schaeuble dismissed any proposal of ending the current programme.

"It's over" if Greece doesn't want to continue the aid programme on the current terms, Schaeuble said.

Greece on Wednesday raised 1.14 billion euros in three-month bonds, but rates were higher and demand lower for the second time in a row for the new government.

With Greece on a collision course with its EU partners, European Commission head Jean-Claude Juncker told a meeting of European lawmakers he was worried that Tsipras was in over his head.

"He compared Tsipras to a first year medical student who wants to begin open heart surgery when he has no idea how," a participant at the meeting reported Juncker as saying.