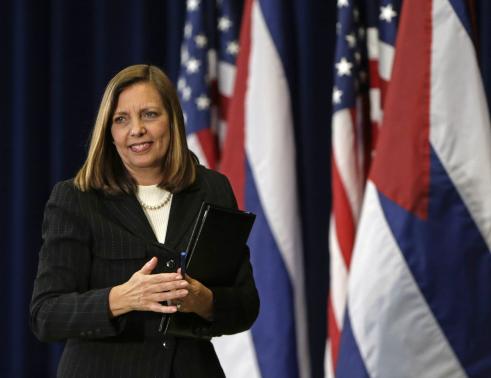 Cuba and the United States meet for talks on restoring diplomatic relations on Monday, seeking more progress toward an agreement while not allowing differences over Venezuela to impede their historic rapprochement.

Assistant U.S. Secretary of State Roberta Jacobson is due to meet in Havana with Josefina Vidal, the Cuban foreign ministry's chief of U.S. affairs, with talks possibly continuing into Wednesday.

Jacobson and Vidal led their respective delegations with great fanfare in Havana in January and in Washington in February, but this session will take place with smaller teams and, so far at least, a media blackout.

The United States severed diplomatic ties with Cuba in 1961, and relations remained hostile even after the end of the Cold War.

But President Barack Obama reversed the U.S. policy of isolating Cuba, entering 18 months of secret talks that led to a joint announcement with Cuban President Raul Castro on Dec. 17 that the two adversaries would seek to restore diplomatic ties, as well as a release of prisoners by both sides.

Obama told Reuters on March 2 he hoped the United States would open an embassy in Cuba before a Western Hemisphere summit in Panama set for April 10-11, when Obama and Castro could have their first face-to-face meeting since shaking hands at Nelson Mandela's funeral in December 2013.

Before agreeing to restore ties, Cuba wants to be removed from the State Department's list of state sponsors of terrorism and also to find a bank willing to handle transactions for its diplomatic posts in the United States.

For its part, the United States wants to increase staff at its mission in Havana and have unrestricted travel for its diplomats on the island.

Both sides reported progress on these issues after the first two round of talks.

Then on March 9 the United States declared Cuba's closest ally, Venezuela, a security threat and ordered sanctions against seven officials from the oil-rich country.

U.S. officials have said the Venezuela issue should not affect the Cuba talks, but Cuban Foreign Minister Bruno Rodriguez said any attack on Venezuela was also an attack on Cuba, saying Washington "has provoked serious damage to the environment in the hemisphere on the eve of the Summit of the Americas."

"I hope that the U.S. government understands that it can't handle Cuba with a carrot and Venezuela with a garrote," Rodriguez said on Saturday while visiting Venezuela.