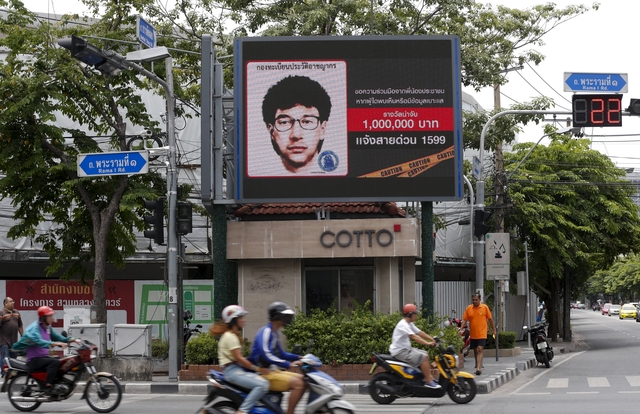 Thai police found and defused a bomb on Monday a week after an explosion killed 20 people in the country's worst-ever bomb attack but it was not clear if the device found at a Bangkok construction site had anything to do with the earlier blast.

The discovery of the bomb came after police said the trail had gone cold in the hunt for those responsible for the Aug. 17 attack on Bangkok's most famous shrine, and they were unsure if the main suspect was still in the country.

"We received reports this afternoon of a bomb in Sukhumvit 81," Kamthorn Aucharoen, commander of the police's explosive ordnance team, told Reuters, referring to a road off of one of Bangkok's main thoroughfares.

Police could not immediately confirm if the device was linked to the attack last Monday, and a second explosion at a pier on Bangkok's river on Tuesday that caused no casualties.

The main evidence police have for last week's attacks is security camera footage.

Some of the footage, from the Erawan shrine to a Hindu deity popular with Asian tourists, shows the suspected bomber slipping off a backpack and walking away.

The young man with a yellow shirt and dark hair was also caught on closed circuit television camera leaving the scene on the back of a motorcycle taxi. But after that, there was very little, police said.

"In terms of the CCTV cameras, some don't capture images properly and some were damaged which is a waste of time for police piecing together where the suspect went," national police chief Somyot Poompanmuang told reporters.

"You want the truth? We don't know if the suspect is still in Thailand but I have to assume he still is because we've got no information that he left."

The government said the attack was aimed at undermining the economy by hurting tourism, an even more vital industry as growth flags in other sectors.

Half the 14 foreigners killed were from mainland China or Hong Kong, but the Thailand-China Tourism Association, which oversees more than 200 operators bringing Chinese visitors, said there was little sign Chinese holidaymakers had been put off.

"There have been maybe one or two cancellations here and there. Nothing major," association resident Ronnarong Cheewinsiriamnuai told Reuters.

Chinese operators had not cancelled flights and overall, Ronnarong said, he had seen a dip of about 2 percent in Chinese visitors.

The military government wants growth as it steers the country towards an election next year under a new constitution critics say will not end a decade of turbulent politics.