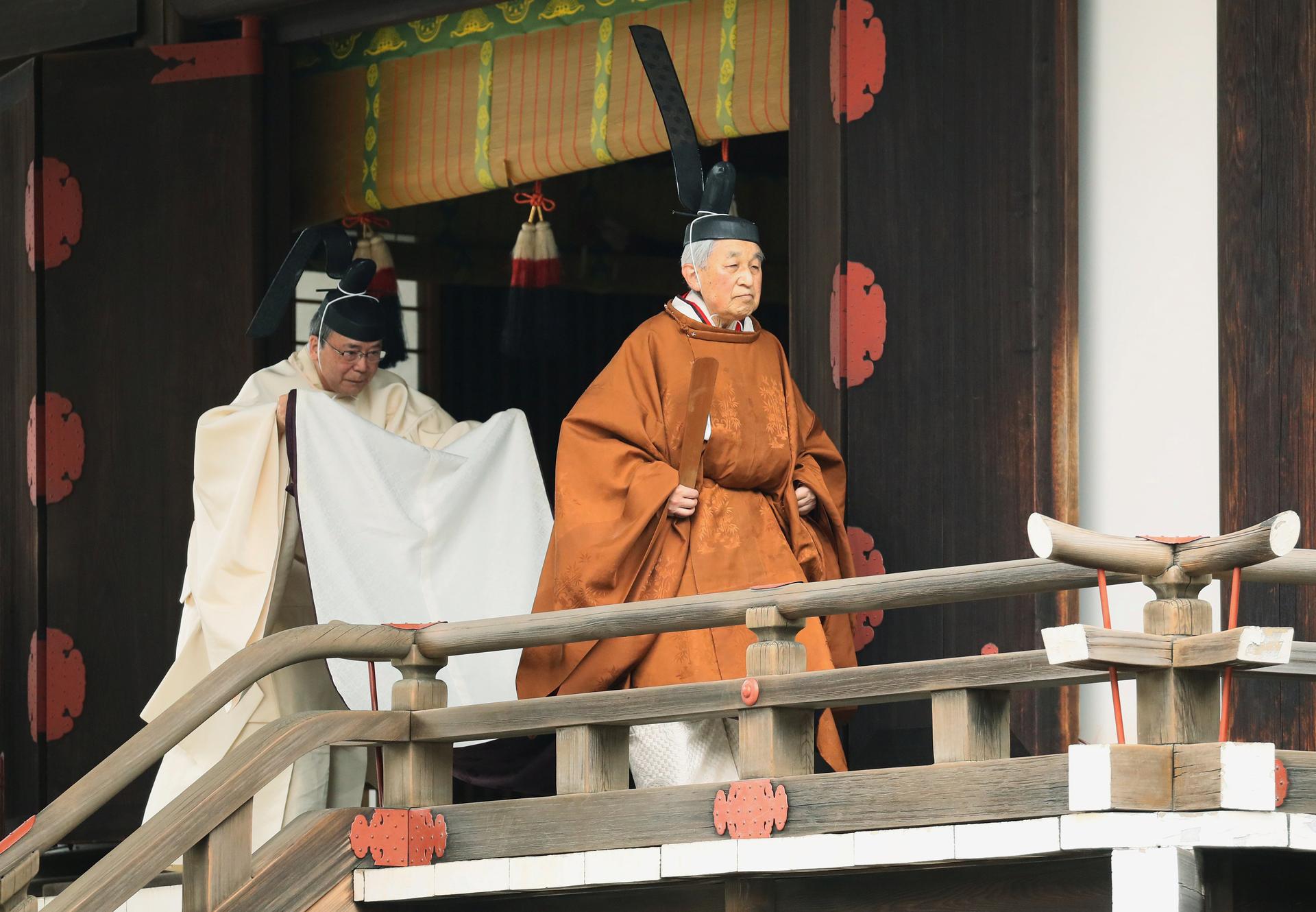 TOKYO -- Japan’s Emperor Akihito prayed to a Shinto sun goddess on Tuesday, starting a day of ceremonies to mark the end of a three-decade reign in which he sought to ease painful memories of World War Two and bring the monarchy closer to people.

Akihito, 85, was the first monarch to take the Chrysanthemum Throne under a post-war constitution that defines the emperor as a symbol of the people without political power. His abdication is the first in two centuries.

His father, Hirohito, in whose name Japanese troops fought World War Two, was considered a living deity until after Japan’s defeat in 1945, when he renounced his divinity.

Akihito, together with Empress Michiko, his wife of 60 years and the first commoner to marry an imperial heir, carved out an active role as a symbol of reconciliation, peace and democracy.

“I think the emperor is loved by the people. His image is one of encouraging the people, such as after disasters, and being close to the people,” Morio Miyamoto, 48, said as he waited near a train station in Tokyo.

“I hope the next emperor will, like the Heisei emperor, be close to the people in the same way,” he said.

Akihito, who has had treatment for prostate cancer and heart surgery, said in a televised address in 2016 that he feared his age would make it hard for him to carry out his duties fully.

Report to the Sun Goddess

Akihito reported his abdication in sanctuaries inside the Imperial Palace, including one honoring the sun goddess Amaterasu Omikami, from whom mythology says the imperial line is descended, and two others for departed emperors and Shinto gods.

Video aired on NHK public TV showed Akihito, wearing a dark orange traditional robe and black headdress, walking slowly into the first sanctuary as a courtier in a white robe walked behind holding the train and another carried a sword. Crown Prince Naruhito conducted a similar ceremony, NHK said.

Ahead of the ceremonies, Japanese onlookers and foreign tourists gathered outside the palace amid tight security.

“I wanted to come to the Imperial Palace as they (emperor and empress) are like the father and mother of the country,” said Kimiyo Miyagawa, 68, a housewife from northern Japan who came with her daughter to be near the palace.

“I would like to tell them ‘Thank you so much for your hard work’,” she said. “I’m full of gratitude.”

The abdication will be marked by a brief and relatively simple ceremony in the Imperial Palace’s prestigious Matsu no ma, or Hall of Pine. About 300 people will attend and it will be broadcast live on television.

Attendees at the afternoon abdication ceremony will include Prime Minister Shinzo Abe, Empress Michiko, Crown Prince Naruhito and Crown Princess Masako, as well as the heads of both houses of parliament and Supreme Court justices.

Imperial chamberlains will carry state and privy seals into the room along with two of Japan’s “Three Sacred Treasures” - a sword and a jewel - which together with a mirror are symbols of the throne. They are said to originate in ancient mythology.

Abe will announce the abdication and Akihito, wearing Western morning coat, will make his final remarks as emperor.

Not everyone was excited by the imperial changeover.

“It’s a normal day. That kind of political stuff is irrelevant to us ordinary people,” said Masato Saito, a 40-year-old construction worker. “As long as they make our lives easy to live, that’s all I care.”

U.S. President Donald Trump and First Lady Melania offered their “heartfelt appreciation” to the royal pair in a statement.

Naruhito, 59, will inherit the throne in separate ceremonies on Wednesday. Naruhito, who studied at Oxford, is likely to continue an active role and together with Harvard-educated Masako give the monarchy a cosmopolitan tinge.

Police have tightened security near the Imperial Palace, a 115-hectare site that is home to the emperor and empress in the heart of Tokyo. Media said several thousand police officers were being mobilized in the capital over the next few days.

Tuesday marks the last day of the Heisei imperial era, which began on Jan. 8, 1989, after Akihito inherited the throne. The era saw economic stagnation, natural disasters and rapid technological change.

Japanese traditionally refer to the date by the era name, or “gengo”, a system originally imported from China, on documents, calendars and coins but many people also use the Western calendar.