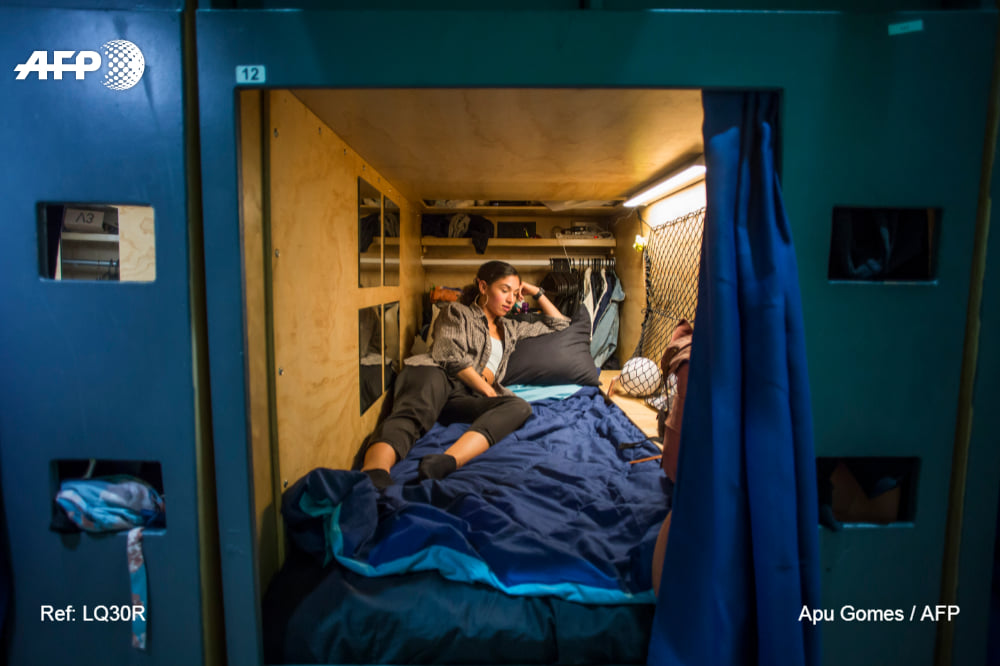 Los Angeles -- Kay Wilson packed up her life in a hurry and moved to Los Angeles... only to find that what she paid in Pennsylvania for a nice studio apartment would only get her a 2.9-square-meter box in California.

Her new home is a capsule, inspired by the famous hotels in Japan.

Wilson arrived a month ago at UP(st)ART, a community for young people with artistic aspirations in need of an affordable place to live.

Each room contains up to six capsules, which Wilson describes as "cozy." They contain a single bed, a bar for hanging clothes, a few compartments for storing shoes and other items and an air vent.

By most standards, the accommodation is still not cheap -- $750 per month plus taxes. That works out at around $800, which is slightly more than the 26-year-old was paying in Bethlehem, around 70 miles outside Philadelphia.

Jeremiah Adler, founder of UP(st)ART, said each capsule costs roughly half the rent of a studio in Los Angeles -- the US entertainment capital, and one of its most expensive cities.

Among the rules: women and men sleep apart, and having sex is not an option.

Still, the capsule-living concept is also catching on in other expensive US cities including New York.

For Dana Cuff, an architect and professor at the University of California, Los Angeles (UCLA), this type of community presents only a short-term solution.

"We basically need to be developing a huge range of options for the kinds of housing that are available," she said. "To me, co-living pods... are symptoms of this deep need for a much greater range of housing alternatives."

'Living with the minimum'

It's taco night, and around 50 people are eating together in one of the four-building complex's communal areas.

Among the group are rappers, dancers, sculptors and actors from the US and elsewhere.

Kimma Moonshine has lived in the community for a year, and told AFP that so far she has not found living with 90 housemates to be overwhelming.

"You learn to live with the minimum," said the Canadian 27-year-old, a painter who currently works as a nanny.

She paid less at her previous home, but she prefers this option.

"I had 12 roommates, the only way I could work on my art was on the kitchen table after everyone went to sleep. It's cool having that workshop now."

Alejandro Chupina, 27, left home as a teenager because his parents did not support his career as an actor and musician.

He moved into an UP(st)ART capsule eight months ago, attracted by the recording studio, and is happy with his choice.

"We have so many different amenities... for what we're paying, I feel like we're getting way more, in different ways," said the young man with a handlebar moustache, who can recite the musical "Hamilton" by heart.

Wilson's plan to move to Los Angeles was brought forward from a year away to just weeks when she received an offer to work in a salon.

"I sold all my belongings and I moved here to be in this pod... I'm finding comfort in being uncomfortable," she joked.

But Wilson, who earns the minimum wage of $13 per-hour plus tips, did not move to Los Angeles simply to be a salon stylist.

Like many who come to Hollywood, she dreams of becoming a successful actress.

UP(st)ART, which opened three years ago and resembles a cross between a college dorm and a luxury hostel, seems like the ideal place to start.

"People who were here two or three years ago when they started -- they're starting to get cast in TV shows and record deals and everything like that," said Adler.

"And so that's a rewarding thing, being able to watch people's careers progress."