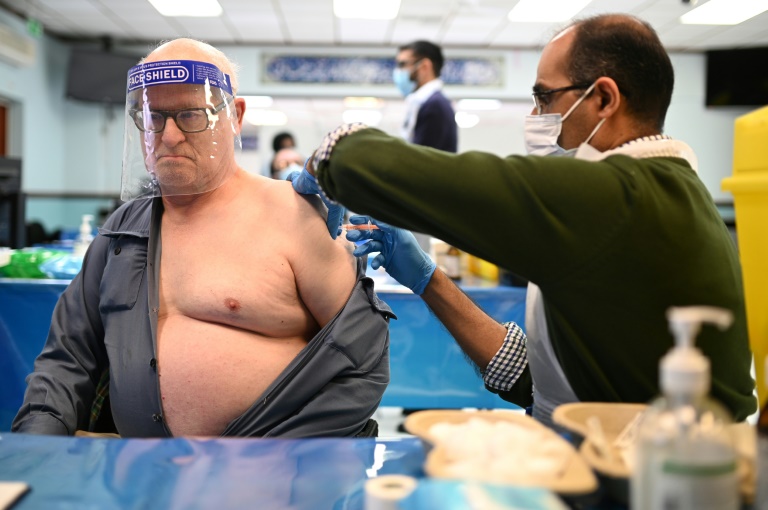 COPENHAGEN -- European nations need to work more closely with drug firms to increase the pace of coronavirus inoculations, the WHO said on Friday, as Johnson & Johnson pushed for its jab to become the third approved for use in the United States.

EU chiefs have engaged in bitter public rows with firms over supply shortages and legal obligations, as a slow vaccine rollout has sparked public anger and plunged the bloc's leadership into crisis.

"We need to join up to speed up vaccinations," the World Health Organization's Europe director Hans Kluge told AFP in an interview.

In a sign of Europe's increasing urgency, top EU diplomat Josep Borrell said he hoped Russia's Sputnik V jab would be approved for use in Europe soon.

"It's good news for the whole of mankind because it means we will have more tools to fight the pandemic," he said during a visit to Moscow.

Experts have warned that vaccines will only control the contagion -- which has killed more than two million since emerging in late 2019 -- if the whole world is covered.

Although more than 115 million shots have so far been administered, most have been in high-income countries.

Kluge reiterated the WHO's call for rich countries to help poorer parts of the world, urging them to donate spare doses after inoculating the most vulnerable parts of their populations.

Drug firm Johnson & Johnson has asked US regulators to authorise its vaccine, which requires only one dose and can be stored at normal refrigeration temperatures -- unlike the other two jabs currently in use.

The firm has said it is on track to supply 100 million doses to the U.S. if authorised, a major boost to the hardest-hit nation in the world.

But trials have shown the J&J shot is not as effective against the highly transmissible variant first identified in South Africa that is rapidly spreading around the world.

The South Africa variant and another first uncovered in England are causing increasing alarm across the world, with experts in Germany warning that they had given the pandemic "another boost".

"The situation is far from being under control," said Lothar Wieler of the Robert Koch Institute (RKI), a day after the government had hinted it was thinking about relaxing some restrictions.

Politicians across the world are agonising over when and how to lift shutdowns and other rules.

Israel, which has vaccinated more than a third of its population, said it had agreed to relax its lockdown from Sunday -- despite registering more deaths in January than in any other month.

The cultural fallout from the pandemic is still being keenly felt in institutions across the world, with museums in Paris shorn of their customary crowds for months and pleading to be allowed to reopen.

"It's a nightmare," said Christophe Leribault of the Petit Palais, where a recent Danish art exhibition managed to stay open for just a few weeks.

"I managed to negotiate some extensions. But after a year, we had to return the paintings."

Sporting calendars too continue to be up in the air, with daily questions over the viability of the forthcoming Australian Open tennis Grand Slam and this summer's Tokyo Olympics.

Football is also in the crosshairs, with English champions Liverpool being barred from travelling to Germany to play a Champions League match against Leipzig.

"It's not our decision, nobody from Germany called me and asked me how is the situation in England," said manager Jurgen Klopp as reports swirled that the February 16 match might go ahead in Hungary.

While officials continue to fathom the latest developments, some experts are still focused on unlocking the mystery of how the virus first began.

"Our paper is a long way away from saying the pandemic would not have happened without climate change," lead author Robert Meyer told AFP.

"But I find it difficult to see that this climate-driven increase in bats and bat-borne coronaviruses make something like this less likely to happen."